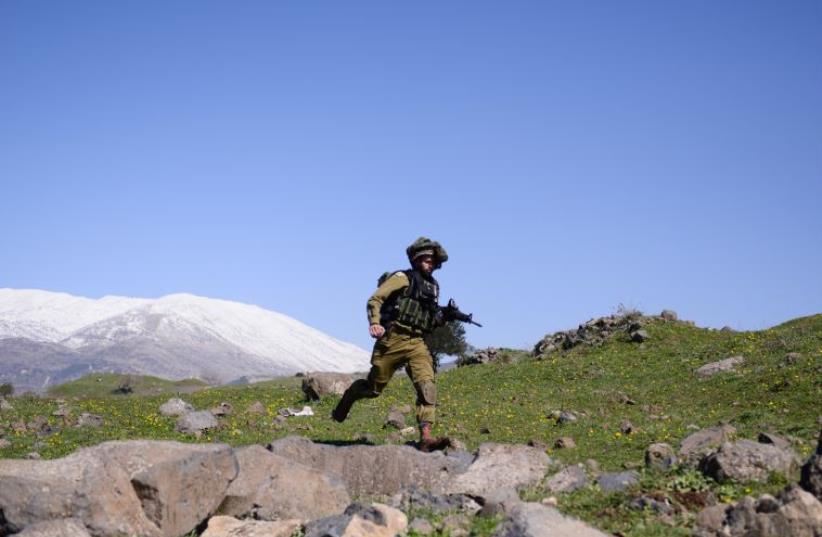 The commanders of the Kfir Brigade trained in the Golan Heights with the Armored Corps and the Combat Engineering Corps
(photo credit: IDF SPOKESPERSON'S UNIT)
Advertisement
The Israeli reprisals against targets in Syria which were launched on Thursday and Friday were a means to rally American Jewish public opinion against the Iran nuclear agreement, pro-Iranian and Hezbollah officials told Arab media over the weekend.Photographs showing the vehicle which was bombed by IDF forces in the Syrian province of Quneitra were published on Friday, Arab media reported. Five people inside the vehicle were killed in the airstrike. The group was suspected of firing rockets toward Israel in an attack on Thursday. According to the official news agency of Syria, SANA, the vehicle which was destroyed by the Israeli air force was a civilian vehicle carrying five Syrian nationals. Syria said the attack was "part of the enemy's (Israel's) aid towards Islamist terrorist operating in the region." The news agency also reported that during the time of the aerial attack, insurgents attempted to take over the town of al-Baath, but they withdrew after a tough battle.Provincial governor Sheikh Ahmed Abdul Qader visited the city's Buildings and Transportation Authority to view damage caused by the Israeli Air Force attack on two buildings.Meanwhile, Hezbollah was on high alert on the southern border. The Kuwaiti newspaper Al-Rai quoted what he called "insiders" as saying that the Shiite organization heightened security along the border with Israel "for fear of attempts by Israel to drag Lebanon into the escalation with Syria in something that is less than war, but more than a standard military operation."Hezbollah operatives believe that Israel may be planning to take action against them because the Israeli leadership considers the current situation as "critical" due to the signing of the nuclear deal with Iran. "For the last 35 years, Iran was able to assist resistance movements led by Hezbollah and Palestinian groups in the Gaza Strip despite imposed sanctions against it," said Arab sources. "What would happen then, if Iran had nuclear capabilities in addition to its economic and military capabilities? It would be more powerful, particularly after Russia opened its strategic warehouses."It also stated that "the Israeli escalation came in parallel to the accusations of Defense Minister Moshe Ya'alon, who blamed Iran for being responsible for firing rockets into northern Israel and while the Israeli air force began to attack Syria."According to the report, "Israel wants to mobilize the American Jewish side, before the vote in Congress on the nuclear deal."