Former minister Yossi Beilin, who initiated the Oslo process, said both sides were to blame for the peace process not advancing. 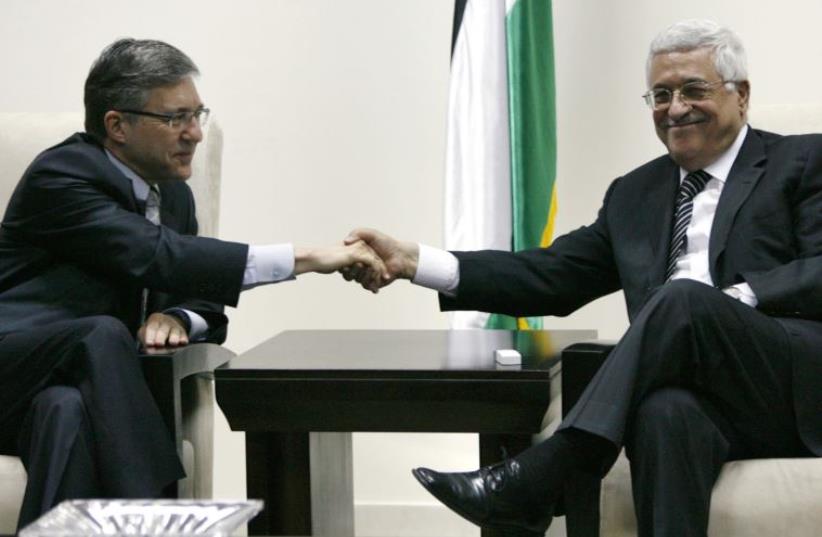 Palestinian Authority President Mahmoud Abbas (R) shakes hands with former justice minister Yossi Beilin
(photo credit: REUTERS)
Advertisement
Palestinian Authority President Mahmoud Abbas’s address to the United Nations General Assembly on Wednesday frustrated some leaders of the Israeli Left, while others endorsed what he said.The Left, which initiated the Oslo Accords that Abbas said he wanted to negate, reacted with different voices to the Palestinian leader’s announcement. Zionist Union leaders Isaac Herzog and Tzipi Livni and Yesh Atid head Yair Lapid expressed disappointment, while Peace Now secretary-general Yariv Oppenheimer praised Abbas.“Speeches, accusations and flags will not create a Palestinian State, only direct negotiations with Israel,” Livni said. “The time has come for the Palestinian leadership to realize that a Palestinian state can only arise through agreements that guarantee Israeli security. Attempts to get the international community to force Israel to make concessions that will harm Israel’s interests will not succeed and are doomed to failure.”Herzog said statements by Abbas accusing Israel of apartheid were twisted and served only the extremists in both nations. He said that both Abbas and Prime Minister Benjamin Netanyahu were letting their people down.“The Israelis and Palestinians deserve hope and normal lives,” Herzog said. “Abbas and Netanyahu are leaders who are afraid of making decisions and prefer slogans and mutual recriminations, while leaving our future hanging in the wind. Instead of taking advantage of a rare chance for creating alliances with moderate countries who want to partner against Islamic terror, they are drowning in their own useless rhetoric.”Speaking to the Israel Policy Forum in New York, Lapid accused Abbas of uttering “terrible words of incitement.”“Maybe it comes from frustration, but it is frustration of their own doing,” Lapid said.Former minister Yossi Beilin, who initiated the Oslo process, said both sides were to blame for the peace process not advancing.“He didn’t offer practical solutions, nor did he deliver the bombshell he promised,” Beilin said. “I wish he would have called for dismantling the PA, which could have persuaded the world to become involved again in the Palestinian issue.”Oppenheimer said Israelis would miss leaders like Abbas, who still believes in the twostate solution. He said he is afraid that the next Palestinian leader would prefer only one.“The content of the speech was the narrative of the Palestinian people, which reflects reality,” Oppenheimer said. “It is the reality that is frustrating, not the speech. Israel really isn’t doing what it needs to bring about two states.”Joint List head Ayman Odeh said he agreed with Abbas that Israel in general and Netanyahu in particular violated every agreement, made the occupation endless, deepened the settlements, and destroyed Oslo.“The occupation is a disaster not only for the Palestinians but also for the citizens of Israel, who should join together to fight the occupation and for the formation of a Palestinian state,” he said.The Right expressed hope that Abbas’s speech would wake up the Left to the hopelessness of pursuing a peace process with him.“The opposition should come its senses and realize that there is no true Palestinian partner for peace,” said Tourism Minister Yariv Levin (Likud). “Abbas shattered the remnants of the illusion of Oslo. The Palestinians long ago chose the path of terrorism. The PA was never a solution but always the heart of the problem.”Bayit Yehudi leader Naftali Bennett said Abbas has “returned to his bad old days as a Holocaust denier with a speech that revises history.”He noted that in the speech Abbas called for the release from prison of murderers of men, women and children.“At a time when Europe is dealing with a wave of refugees and the Middle East is on fire and coming apart, Abbas will also be replaced and will be remembered by history as just another terrorist – and not one of the most successful ones,” Bennett said Yisrael Beytenu head Avigdor Liberman called Abbas an inciting hypocrite.“Just as his threat of a bombshell was empty, so were his attacks and lies against Israel,” he said. “The sooner he leaves his job, which he does not hold democratically, the better it will be for everyone.”Culture and Sports Minister Miri Regev noted that while Abbas was speaking, IDF soldiers were wounded by rocks in Hebron. She said the speech showed that Abbas could not be a partner for Israel.“Abbas is not interested in a diplomatic agreement,” she said. “He reminded everyone tonight that he is the heir to the mass-murderer Yasser Arafat. He is part of the same axis of evil with [Syrian leader Bashar] Assad.”Immigrant Absorption Minister Ze’ev Elkin said Abbas was the last person who could scold Israel, because he pays the salaries of murderers and incites against the Jewish state.Elkin said the PA had violated Oslo by encouraging terror and taking unilateral steps in international organizations.“If you want to leave, leave now,” Elkin said. “The Israelis and Palestinians will only be better off.”Agriculture Minister Uri Ariel (Bayit Yehudi) said Israel should react to the speech by exercising its sovereignty over all the Jewish communities in Judea and Samaria and annexing the area known in the Oslo Accords as Area C, where all the settlements are located.