Photos released by Judea and Samaria District police after the incident show a large hole in the windshield on the driver’s side of the car, as well as the axe lying on the floorboard of the van. 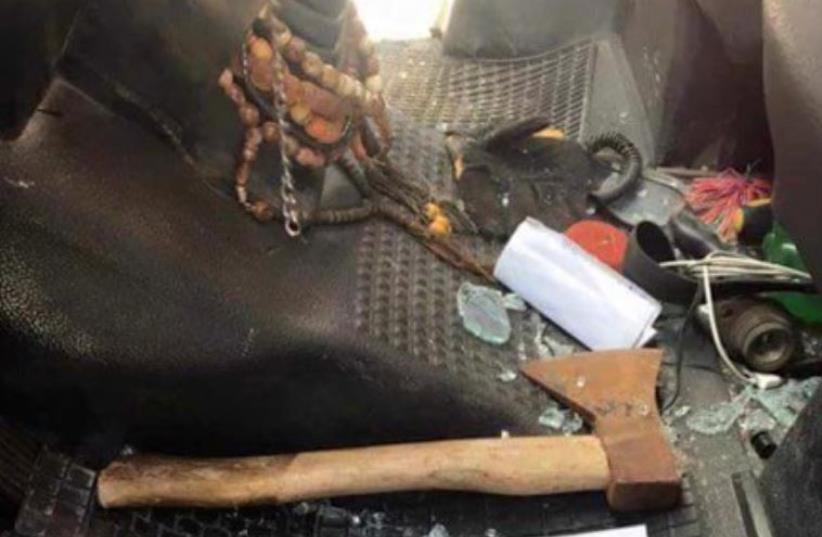 Axe thrown at a Palestinian motorist.
(photo credit: JUDEA AND SAMARIA POLICE)
Advertisement
An Israeli man who threw an axe at a Palestinian motorist following a road rage incident last week was indicted on Sunday for throwing an object at a vehicle.The suspect, 40-year-old Shlomi Katzav of Karnei Shomron, avoided more serious charges such as attempted murder or attempted causing of grievous bodily harm for the incident last Wednesday.According to the indictment, last Wednesday at around 11 a.m., Katzav was driving his car on highway 55 next to the Palestinian village of Azzun near Qalqiyah, when the victim pulled out in front of him onto the highway.The incitement said that Katzav became angry and began honking and cursing at the man and a “highway duel” ensued, with the two men repeatedly cutting each other off.Katzav then passed the victim and drove ahead to the entrance to Karnei Shomron, where he allegedly pulled over and waited for the driver to pass him. When the Palestinian man neared the entrance, Katzav allegedly threw an axe at the vehicle, with the weapon piercing the windshield and landing at the driver’s feet.Photos released by Judea and Samaria District police after the incident show a large hole in the windshield on the driver’s side of the car, as well as the axe lying on the floorboard of the van.“The suspect knew that these actions – throwing an axe at a vehicle in motion - has the potential to endanger the security of the passenger and show intent to harm him,” the indictment read.In February of last year the Knesset approved a minimum penalty for dangerous rock throwing. The legislation proposed by the Justice Ministry states that the minimum sentence must be at least one-fifth of the maximum sentence of 15 years, and that the courts can sentence a rock-thrower to probation only in special circumstances.Those convicted will also not receive National Insurance Institute benefits while in prison, according to the law.Part of the impetus behind the passing of the bill was a series of deadly incidents involving rock-throwing at Israeli motorists on the country’s highways. These include the murder of Asher Palmer and his infant son Yonatan, who were hit by a stone thrown by a Palestinian as they were driving on Highway 60 near Kiryat Arba, and the death of Adele Biton, the 2-year-old girl who was critically injured in a car accident caused by rock-throwers in March 2013, and who died in hospital two years later of an infection.