Ze’ev Elkin told the 'Elaph' Arab-language web site on Friday that Israel continues to maintain the status quo at the Islamic holy places in Jerusalem. 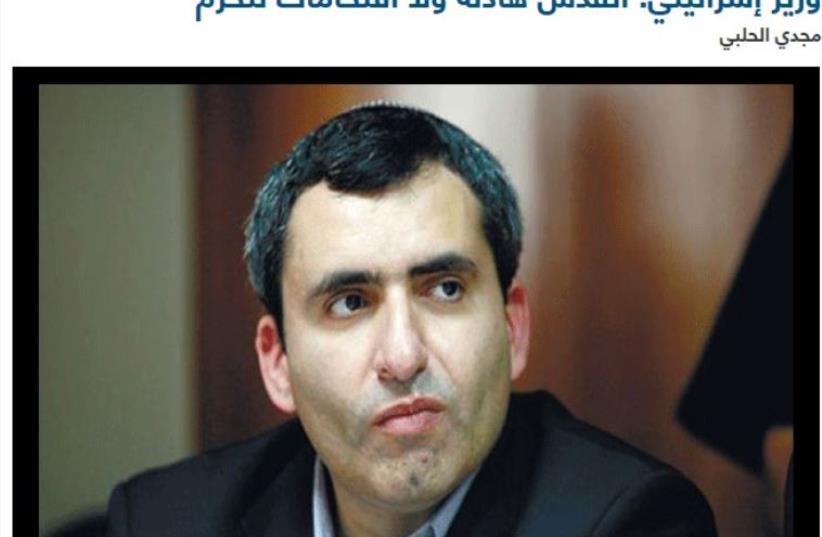 Ze'ev Elkin, the minister of immigration and absorption, gave an interview to a Saudi site
(photo credit: Courtesy)
Advertisement
An Israeli government minister granted an unprecedented interview to a Saudi news site on Friday.In a sign of warming, albeit unofficial, ties between the Jewish state and the House of Saud, Ze’ev Elkin, the minister of immigrant absorption, told the Elaph Arab-language web site on Friday that Israel continues to maintain the status quo at the Islamic holy places in Jerusalem.Israel and Saudi Arabia’s shared enmity for Iran has created an opening for dialogue, although any communication between government officials is likely to remain secret as Riyadh does not formally recognize “the Zionist entity.”“Jerusalem is relatively calm in both [the east and the west],” said Elkin, whose ministerial portfolio also includes responsibility for Jerusalem-related affairs. “The wave of incitement this past year generated a wave of terrorism that is almost over in Jerusalem and has spread to Judea and Samaria.”“Anyone who visits Jerusalem doesn’t see anything abnormal,” the minister told Elaph. “Accusations against Israel of violating the status quo on Temple Mount are false, because the directives from the prime minister are to prevent Jews from praying in Aksa mosque, and this is because it’s against the law.”In the interview, Elkin reiterated his longstanding opposition to partitioning Jerusalem and handing the Palestinians control of the eastern portion as part of a final-status peace agreement, though he added: “I don’t believe there will be negotiations anytime soon in light of the Palestinian incitement against Israelis.”Elkin said that he supported allocating resources to improve the infrastructure in predominantly Arab east Jerusalem.“We’ve added budgets for over 100 more classrooms as well as funds for neighborhoods in east Jerusalem,” Elkin said. When asked if these funds will lead to Arab acceptance of “the Israeli occupation,” the minister replied: “In recent Palestinian polls, we’ve seen that most residents of east Jerusalem have no interest in living under Palestinian rule. Indeed, most residents of the Arab neighborhoods have moved to the Israeli side of the fence.”“There is cooperation between the Israelis and the Arab Jerusalemites, but whoever watches Palestinian television will come to the conclusion that they are living in another country,” the minister said.Elkin also raised geopolitical issues, like the regional rivalry with Iran.“Iran is trying to take over the Middle East after the nuclear agreement by means of its emissaries - Hezbollah, Hamas, the Houthis in Yemen, and by deepening the Sunni-Shi’ite chasm,” he said. “There’s also the Islamic extremism of ISIS, which shows that Israel is not a subject of disagreement in the Middle East.”“Whoever says Israel is the main problem in the region is no longer convincing anybody,” Elkin said.The minister said that the political realities in the Middle East present opportunities for cooperation among countries with shared interests, including Israel and Arab governments. “We welcome any cooperation based on joint interests and the recognition of Israel’s right to exist as the national homeland of the Jewish people in the Holy Land,” the minister said. “It’s still premature to speak of talks or conversations with Arab countries. Whether they want to have open or secret relations with us is their business. We are seeing that these alliances are taking us in new directions that weren’t there in the past.”