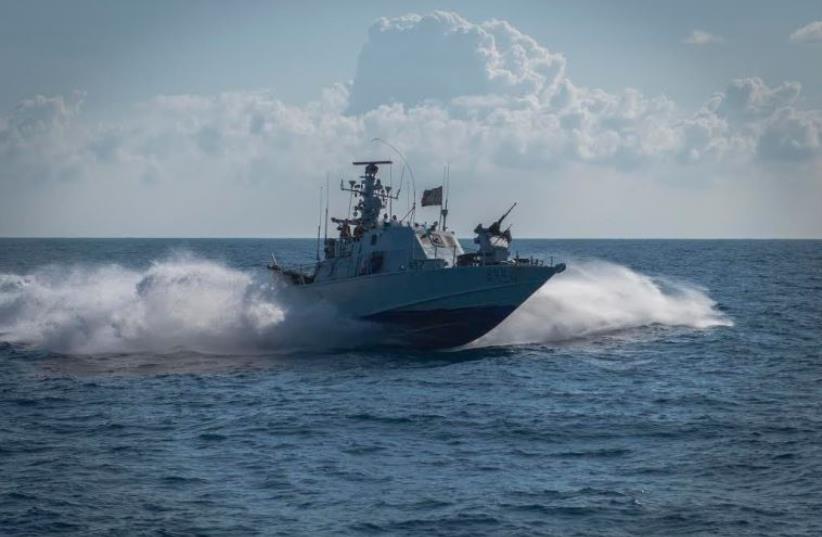 Archive photos of Navy Squadron 916
(photo credit: IDF SPOKESMAN’S UNIT)
Advertisement
Israel's Navy sunk a suspected smuggling boat that was approaching the coast of the Gaza Strip overnight on Saturday, an army spokesperson said. The IDF spotted a suspicious fishing boat loaded with sacs approaching Gaza from the direction of Egypt and called for the vessel to stop. The IDF fired warning shots in the air and in the water but the boat continued on its course. The Israeli forces noticed that the crew began to throw the contents of the boat overboard and then the crew itself jumped into the sea. The boat continued moving at which point the IDF opened fire and sank it.   On Friday it was reported that Israel was planning to ease some of the restrictions placed on fishing operations off the coast of Gaza, AFP cited the head of the Palestinian fishing union as saying. According to remarks by Nizar Ayyash, the move set to take effect on Sunday afternoon will see the distance fishing vessels are permitted to travel extended from six  to nine nautical miles off the coast of southern Gaza.He added that in the waters off of northern Gaza the six-mile restriction is due to stay in place.The report cited Israel's Coordination of Government Activities in the Territories (COGAT) as saying that Israel's Navy had made the decision "to expand fishing south of Wadi Gaza (located south of Gaza City) from six to nine miles" had been made ahead of the coming fishing season.AFP reported that according to COGAT estimates, the decision could lead to a NIS 400,000 annual increase to Gaza's economy.Since 2007, Israel and Egypt have imposed a naval blockade of the coastal Palestinian territory for security reasons.