Outlet later says "it was a mistake" to post game to children's page that called on players to "assist security forces in neutralizing the terrorists that are attacking us." 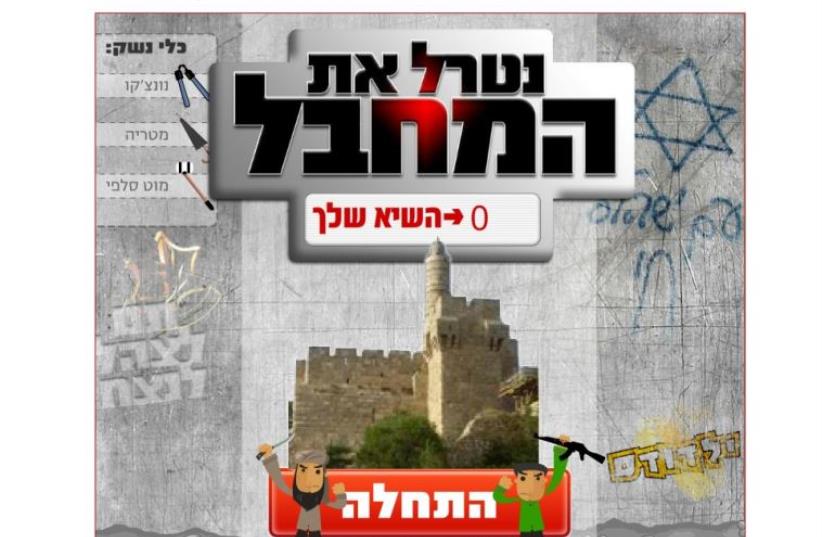 A still from the "Neutralize the terrorist" video game
(photo credit: screenshot)
Advertisement
An animated computer game requiring children to subdue terrorists caused a media stir on Thursday after it appeared on the children's section of an Israeli news portal's website. The game entitled "Neutralize the terrorist" called on surfers visiting Arutz Sheva/Israel National News's "Yelduds" children's page to "assist security forces in neutralizing the terrorists that are attacking us."The game's posting on the website came amid spiked tensions over the past month's increase in Palestinian attacks on Israeli civilians and soldiers, and the responsive measures taken by Israelis. The outlet later on Thursday removed the game from the homepage of its children's section, with an employee of Artuz Sheva telling The Jerusalem Post that its posting "was a mistake.""It was taken down. We didn't like it," she said. However, the direct link to the game remained active on the Internet. The children's game encouraged players to "neutralize" and "take out" the animated terrorists featured brandishing guns, Molotov cocktails and knife. The game provided the player with three "weapons" for neutralization - nunchucks, an umbrella and a 'selfie' stick - the likes of which have been used in recent weeks by Israeli civilians responding to attempted terrorist attacks.The backdrop of the game interchanged with graphic representations of iconic scenery such as the David Citadel in Jerusalem, Tel Aviv's Azrieli Center and Cave of the Patriarchs in Hebron. The interface design also featured graffiti-styled slogans in Hebrew that read "Long live Israel" and "Help the IDF win."