"Instead of hiding behind empty statements, the European Union needs to implement its own declared policy and immediately cease funding organizations that promote boycotts against Israel." 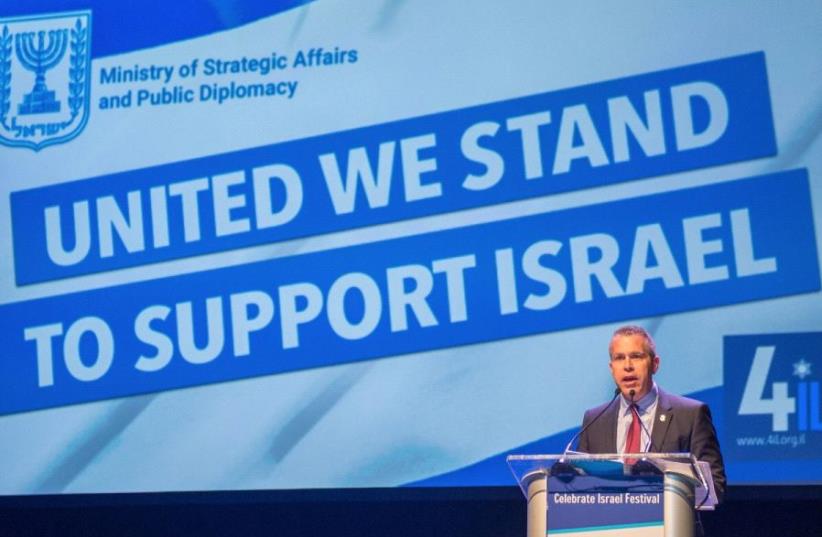 Gilad Erdan announces the launching of a new campaign to combat BDS.
(photo credit: ALEXI ROSENFELD)
Advertisement
The European Union continues to fund organizations that boycott Israel, according to a report published on Wednesday by the Ministry of Strategic Affairs.The Money Trail: Second Edition presents the ministry’s updated research regarding financial aid granted by EU institutions to Palestinian and European non-governmental organizations that promote boycotts against the State of Israel. It details the millions of euros used in funding between 2017 and 2018, for which full data has still not yet been released by the EU.“Instead of hiding behind empty statements, the European Union needs to implement its own declared policy and immediately cease funding organizations that promote boycotts against the State of Israel,” Minister of Strategic Affairs Gilad Erdan said in a statement to EU Foreign Minister Federico Mogherini on Wednesday.The report focuses on ten non-governmental organizations that are active in promoting boycotts of Israel, based mainly on data published by the EU’s Financial Transparency System (FTS) and on data released by European and Palestinian organizations. However, the research covered direct financial aid regardless of the purpose of such funding.The report also identifies data from International Cooperation and Development records of the European Commission, which detail multi-year direct-funding transfers of €750,000  to Palestinians organizations Al-Haq and Al-Mezan.Al-Haq is a Ramallah-based organization and member of the Palestinian Human Rights Organization Council. The organization has taken actions against Israel in the International Criminal Court (ICC) and on the United Nations Human Rights Council (UNHRC). In 2018, Al-Haq, along with several French organizations, urged companies involved in a transportation infrastructure project with Israel to declare their refusal to participate if the project contributed to communities within the West Bank, either directly or indirectly.The organization’s director general, Shawan Jabarin, was a senior member of the Popular Front for the Liberation of Palestine, an organization that is recognized as a terrorist group by the EU, the US and others.Al-Mezan is based in the Gaza Strip. It has also taken action against Israel in the ICC and UNHRC. In 2014, the organization signed a public call urging for an intensification of the BDS campaign against Israel.Minister Erdan said that in light of the report’s findings, “The time has come for the EU to begin a deep reexamination of its policies. Instead of hiding behind empty statements, the European Union needs to implement its own declared policy and immediately cease funding organizations that promote boycotts against the State of Israel.”But the EU pushed back against this report and it previous version, published in May 2018 also by the Ministry of Strategic Affairs, saying: “We previously analyzed the ministry’s so-called ‘Money Trail’ report and came to the conclusion that allegations presented in the report are unfounded and factually incorrect.” According to the EU, A spokesperson noted that in 2018 “we invited the Israeli authorities to engage in a productive dialogue on civil society as foreseen by the EU-Israel Action Plan. This offer was not responded to, but still stands. We consider it unfortunate that again unsubstantiated material is being publicized without prior dialogue and engagement.”According to the Ministry of Strategic Affairs, the report’s findings also align with those of a recent report by the European Court of Auditors (ECA), the EU’s financial-audit body, which identified significant shortcomings in its ability to monitor funds transferred to the numerous organizations that receive EU aid. The ECA warned that the EU lacks sufficient information and transparency as to how these funds were distributed or spent.“In December 2018, the European Court of Auditors… warned that the European Council does not have adequate and sufficiently detailed information as these NGOs use these funds,” and called on the EU to “Immediately end funding for NGOs which actively promote a boycott of Israel,” Erdan said in a statement.Here too, the EU contradicted this allegation.“The Court of Auditors’ (ECA) report found the EU’s selection of NGO-led projects in external action to be generally transparent and in accordance with international transparency standards,” the EU said in a statement. “We stress that the Audit reviewed EU cooperation across the world, and did not make any specific findings regarding the funding of Israeli or Palestinian NGOs.“We take any allegation of misuse of EU funds very seriously and are committed to investigate all those presented with substantive evidence,” the statement continued.The EU reiterated that it has not changed its position regarding the BDS movement and that although it upholds a policy of clearly distinguishing between the territory of the State of Israel and those “occupied” by it since 1967, the EU rejects any attempts to isolate Israel and does not support calls for a boycott.“The EU does not fund actions that are related to boycott activities,” the EU statement concluded.