According to the Shin Bet, their investigation indicated that the cell had been planning and had been involved in attempting to carry out additional terror attacks.

IDF destroys house of Havat Gilad terrorist (IDF Spokesperson's Unit)
Advertisement
The ringleader behind the Havat Gilad shooting, Ahmad Nasser Jarrar, was killed early Tuesday morning, the Shin Bet (Israel Security Agency) announced.In a joint IDF, Shin Bet and Israeli Police operation, security personnel shot Jarrar when he came out of a building in which he was hiding in al-Yamun, near Jenin, armed with an M-16 assault rifle and a bag of explosives. 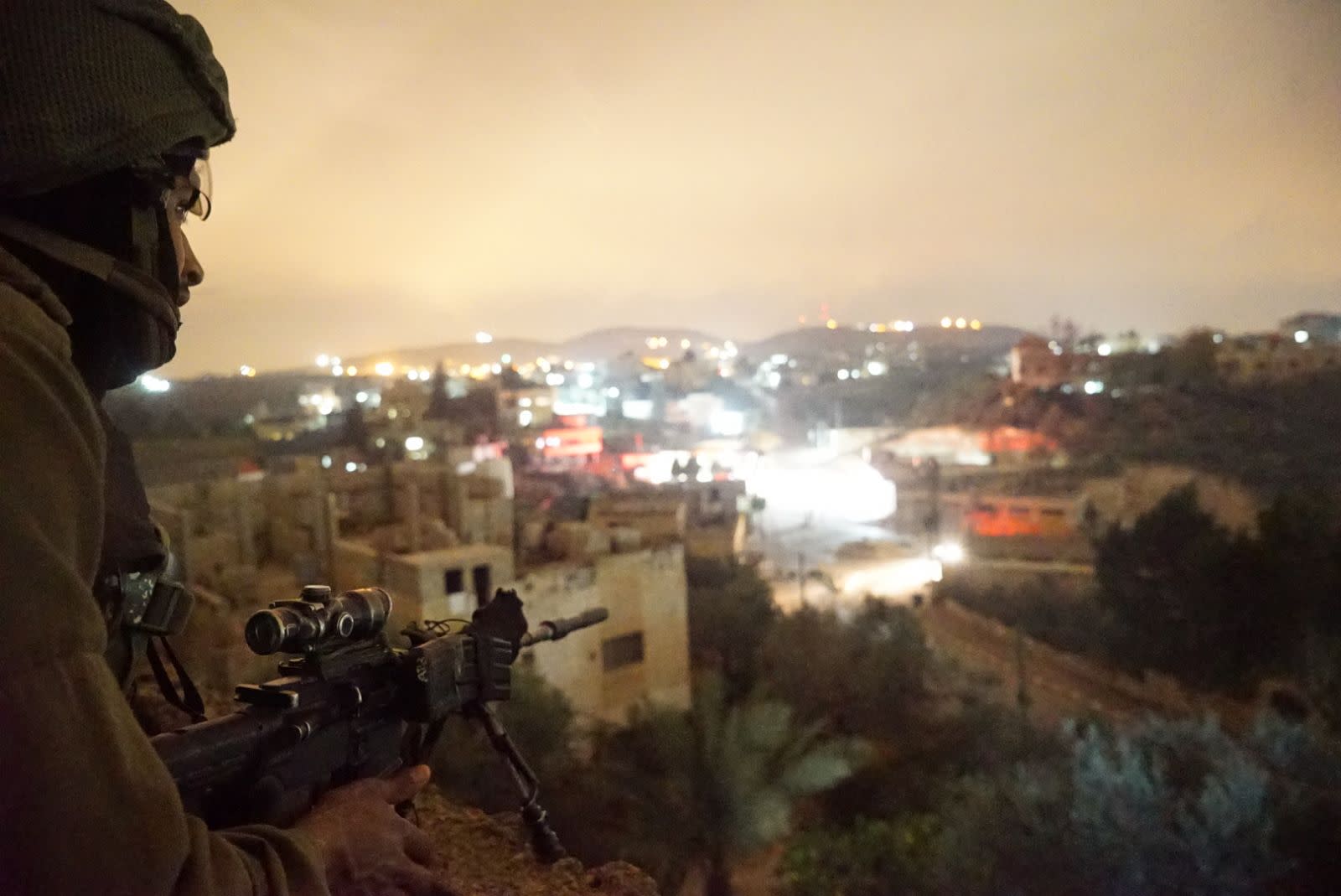 An IDF sniper during the raid on the West Bank village of Al-Yumun. (IDF SPOKESPERSON'S UNIT)
The Givati Brigade’s Reconnaissance Battalion provided support to the Border Police’s Counterterrorism Unit (Yamam) fighters during the operation. Soldiers from Engineering Corps demolished the building in which the terrorist was hiding.No troops were injured during the raid.
Israel buries Rabbi Raziel Shevach, January 10, 2018
The Palestinian Authority’s governor of Jenin announced Jarrar’s death in the military operation.He was a key member of the cell that killed Rabbi Raziel Shevach, 32, a resident of the Havat Gilad outpost near Nablus, who was shot 22 times close to his home in a drive-by attack on Route 60. He was married with six children – four daughters and two sons – ages 11 to eight months.Prime Minister Benjamin Netanyahu congratulated the security forces on their determination to find Jarrar which ended in his death.“A few days ago I told the widow of Rabbi Raziel Shevach that we would find the murderers, and tonight the mission was accomplished,” the prime minister said. “The security forces will reach anyone who tries to harm the citizens of Israel and will bring them to justice. This will also be the case with the murderers of Rabbi Itamar Ben-Gal.”Yael Shevach, the widow of Raziel Shevach, told Army Radio in an interview on Tuesday morning the fact that security forces found and killed her husband’s murderer “did not solve the problem.“I really feel that desire to close the account, but when it comes mixed up with another murder, we did not solve the problem. So what if one [terrorist] was killed if [there are] those who are still waiting to kill another Jew? The search for a terrorist is not what will solve the problem,” she said.Hamas has praised the January 9 attack and said that Jarrar was a member of its military wing, the Izzadin Kassam Brigades. Jarrar’s father, Nasser Jarrar, was a senior Hamas commander in the West Bank who was imprisoned by Israel for planning one of the jihadist group’s first suicide bus bombings in 1994, and was killed by Israeli troops in 2002.According to the Shin Bet, its investigation indicated that the cell had been planning and had been involved in attempting to carry out additional terrorist attacks.Over the course of the manhunt, security forces carried out both covert and overt operations in the West Bank, arresting several other Palestinians including members of the Jarrar clan and killing two Palestinians. While their interrogations continue, further details are subject to a gag order.Eight days after Shevah’s murder, on January 18, the police’s Counterterrorism Unit led a 12-hour operation in Jenin, in which one Palestinian was killed and two others were arrested, and two Counterterrorism Unit officers were wounded in exchange of gunfire with the suspects.During the operation, troops demolished Ahmad Nasser Jarrar’s home as well as the adjacent home that belonged to his uncle and another two belonging to the Jarrar clan. While Ahmad Nasser Jarrar was initially believed to have been killed in the demolition of the home, his body was not found by Palestinians inside the rubble. 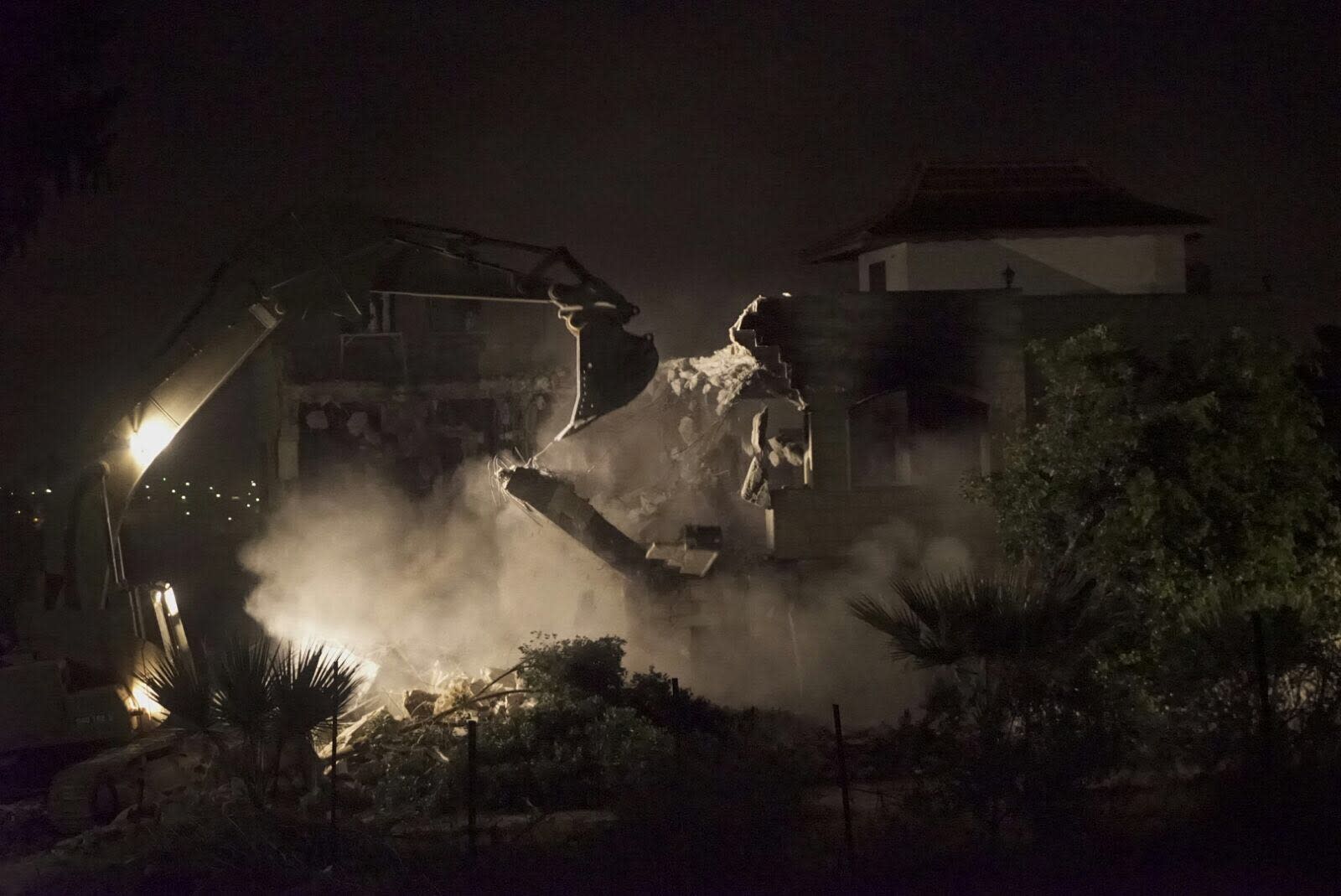 The IDF demolishes the home of Ahmad Nasser Jarrar, ringleader believed to be behind the Havat Gilad shooting. (IDF SPOKESPERSON'S UNIT)
On Tuesday morning, Defense Minister Avigdor Liberman congratulated the troops who carried out the joint operation, tweeting that “the account is closed.”“It was clear that it was only a matter of time before we struck the head of the cell that murdered Rabbi Raziel Shevach. I hope that we will soon have our hands on the murderer of Rabbi Itamar Ben-Gal.”Liberman added that security forces had also arrested all those who supported the cell, “completely eradicating a significant terrorist cell.”President Reuven Rivlin also praised the troops who carried out the “complex operation,” and added that he has “no doubt the murderer of Itamar Ben-Gal and his accomplices will also be pursued until captured. The State of Israel will never surrender to terrorism, and will get to the last of the accomplices for the safety of our citizens.”