Tarabin was arrested after illegally crossing the border into Egypt and was sentences to 15 years in prison. 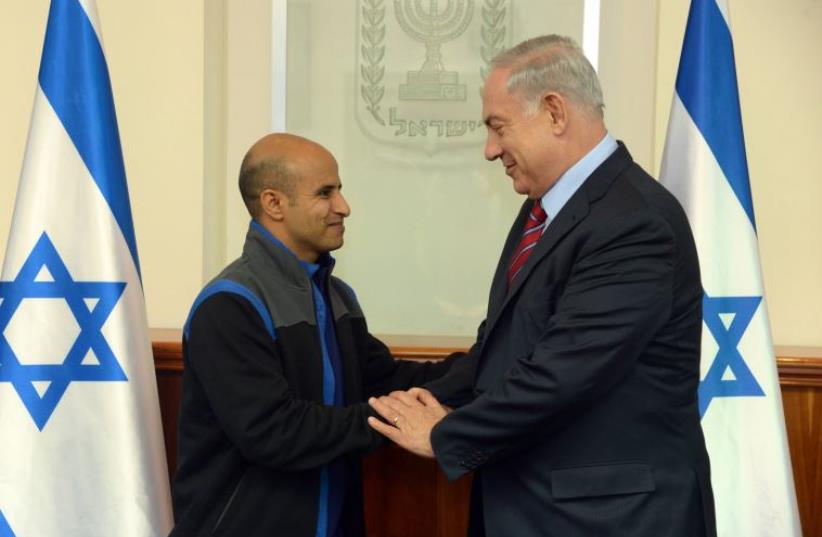 Netanyahu and Uda Tarabin
(photo credit: CHAIM TZACH/GPO)
Advertisement
Prime Minister Benjamin Netanyahu met in his office Thursday with Ouda Tarabin, an Israeli Beduin released from an Egyptian prison this week after serving a 15-year sentence on charges he spied for Israel. Tarabin arrived in Israel Thursday morning.“I feel like I’m in a dream,” Tarabin told reporters. “I don’t believe it. To return after 15 years is a lot of years. Thank God.”Netanyahu told Tarabin, 35, he can now “start anew.”“Welcome home,” Netanyahu said. “We had long discussions with the Egyptians for years, and we are happy to see you here with us now. I told you that we would bring you back, and that is what happened.”Israel simultaneously released two Egyptians serving time in Israeli jails who had finished their sentences.Zvi Mazel, Israel’s sixth ambassador to Egypt and now a fellow at the Jerusalem Center for Public Affairs and contributor to this newspaper, told The Jerusalem Post that Tarabin’s sentence was scheduled to end next week in any case, but that ”the Egyptians found the right way to get something from Israel for it.”Mazel speculates that the two released Egyptian prisoners, like others Israel holds, were likely small time spies, involved in drug smuggling, or crossed the border illegally.“Egypt never asks for the release of their prisoners because they don’t give a damn,” asserted Mazel.Tarabin “didn’t deserve 15 years and probably was not a spy,” he added.Mazel said Israel tried to win Tarabin’s release in 2012, offering 67 Egyptian prisoners in return.“In their mind, they thought because we were willing to release 67 prisoners for one guy that he must be a spy.The main problem is that the Egyptians are so afraid and paranoid that we are cheating them,” he said, adding that they thought they just could not find the “smoking gun” because “they always suspect we are spying.”The Egyptian government wanted to be perceived by their own people as releasing a spy and receiving two Egyptian prisoners in return, he said.Deputy Regional Cooperation Minister Ayoub Kara took some credit for Tarabin’s release, saying he had been pushing for it for years.Kara met with Tarabin’s family on Wednesday night and told the Post they did not want to conduct any interviews with the press.“I thank Prime Minister Benjamin Netanyahu for supporting my request,” Kara said.Netanyahu’s envoy Yitzhak Molcho had, for years, raised Tarabin’s case with Egyptian interlocutors going back to the days when Hosni Mubarak was in power.Tarabin, who moved from Egypt to Rahat when he was 10, was arrested in 2000 after illegally crossing the border into Egypt.Both Jerusalem and the Tarabin family denied the charges that he spied for Israel.Reports surfaced in 2012 that Israel and Egypt were in talks for a prisoner exchange to free Tarabin, but the negotiations did not succeed.In May 2014, Tarabin wrote Netanyahu, urging him to secure his release.“Your government forgot me in an Egyptian prison where I’m being held for no reason.Had I been Jewish or Druse, you would have fought for me,” Tarabin wrote. “Unfortunately, neither you nor your government took care of me because I’m an Arab.”His letter described poor treatment in the Egyptian prison and a lack of legal rights.Tarabin said he was discriminated against and denied consultation with the judge due to his Israeli citizenship.Tarabin’s mother told reporters after her son’s release: “I am very, very happy, the happiest in the world. For 15 years, I didn’t see him, and for 15 years I was sad. I very much want to get him married, and I am thankful to the prime minister and to all those who helped get him released.”Jerusalem Post staff contributed to this report •