Israeli teacher under fire for participating in Nabi Saleh demonstrations

Teacher can be seen walking with a small group of villagers carrying Palestinian flags as they chant, “five, six, seven, eight, Israel is a fascist state.” 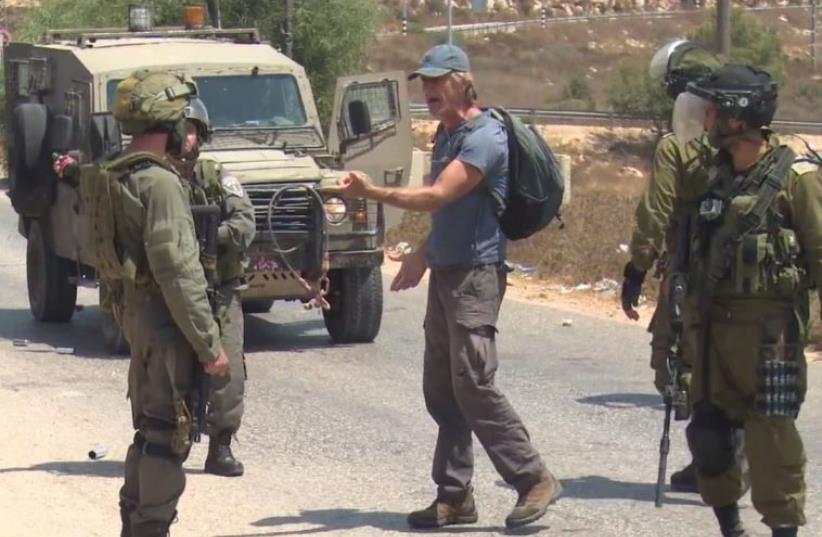 Israeli teacher confronts soldiers at Nabi Saleh
(photo credit: screenshot)
Advertisement
An Israeli high school teacher is under fire after he was seen in the Friday YouTube video that went viral, in which Palestinian women and children attack an IDF soldier as he attempts to arrest an 11-year old boy with a broken arm.In the background of that video it is possible to see a tall man, in a bluish-gray T-shirt and a baseball cap, who has since been identified as a teacher at the Avin ORT High School in Ram Gan.The teacher does not attack the soldier, but he does appear to call on him to leave the boy alone.The IDF has charged that the soldier attempted to arrest the boy, Muhammad Tamimi, because he was throwing stones during the weekly Friday demonstration.ORT, Israel’s Sci-Tech Schools Network, said it had received a complaint about the teacher’s actions, which had occurred during his private time and bore no connection to the school or his job there.It added that the issue was being looked at based on guidelines from the Education Ministry. The Ministry said the matter was being handled by ORT. The teacher could not be reached for comment.Residents of the Nabi Saleh village hold weekly Friday demonstrations against Israel’s military presence in the West Bank and the expropriation of their land by settlers. The marches often erupt into violence, in which Palestinians throw stones and IDF soldiers shoot tear gas.Muhammed Tamimi’s family often participates in those demonstrations.Video footage from August 7, showed that the teacher from ORT has also marched with the villagers in the past.
Israeli teacher confronts soldiers at Nabi Saleh
In that video, the teacher can be seen walking with the small group of villagers carrying Palestinian flags as they chant, “five, six, seven, eight, Israel is a fascist state.”The IDF responds to their small march by shooting tear gas at them. The teacher strides ahead of the Palestinian marchers to where the IDF soldiers are standing by a few vehicles. He tells them the march is non-violent and asks them to leave.The soldier in turn yells at the teacher to go home.“I don’t want to. I am a teacher,” the tall Israeli man responds and adds, “I’m protecting them [the Palestinians.]”“I’m embarrassed by you. Look what you’re doing in the name of Israel,” the teacher says.A minute later, during another exchange with a soldier, the teacher charges, “You’re an occupier. You [the IDF soldier] are participating in a crime.”He continues to yell, “You are not a defense force, you are an occupation force.”Just before the soldiers take him away, the teacher yells, “You are executing illegal orders.”Villagers stand on the road, sing and wave flags for a minute before soldiers disperse them with tear gas.Video footage, from the Friday, August 28th Nabli Saleh demonstration, however, showed a very different exchange.
Palestinians scuffle with an Israeli soldier as they try to prevent him from detaining a boy during a protest.
In that demonstration, young masked Palestinian men used sling shots to lob stones at IDF soldiers.It is on the sidelines of that demonstration that a partially-masked IDF soldier with a rifle in his hand can be seen in a video clip running after Muhammad across an empty brown hillside filled with rocks and a few scattered olive trees.The soldier catches Muhammad from behind and places him in a choke-hold. Muhammad screams and begins crying. The soldier pushes Muhammad onto a rock and lies on top of him, as a young female activist with a gas mask in one hand tries to pull the boy away.The soldier pushes her back and tells her to leave the boy alone. Muhammad’s left arm can be seen in a cast.The soldier calls out for reinforcements as he holds one arm around the boy’s neck and keeps his other hand on his gun. Within a minute, Muhammad’s sister, Ahed, 14, and mother arrive, along with other women and children.Screaming, they hit the soldier, unmask him, and try to pull the boy away. They succeed just as a second soldier arrives. One of them throws a stun grenade at the Palestinians. Both soldiers, however, walk away without arresting Muhammad.
Palestinian girl confronts a soldier
His sister, Ahed can also be seen in a number of videos about Nabi Saleh protests. Ahed was filmed two years ago shaking her fist at an IDF soldier in another video that went viral. She was then invited to Turkey, where she was honored by then-prime minister and current president, Recep Tayyip Erdogan.