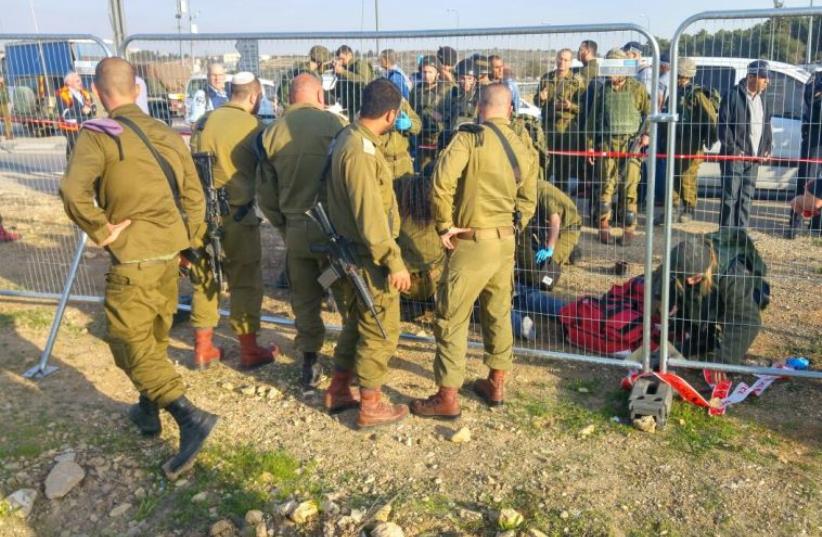 Scene of stabbing attack in Gush Etzion
(photo credit: ETZION FIRE FIGHTERS)
Advertisement
The IDF has banned Palestinian workers from entering the Gush Etzion settlement block on Monday, a spokesman for the Gush Etzion Regional Council said after a Palestinian terrorist stabbed and killed a young Israeli woman on Sunday in the West Bank.Hadar Buchris, 21, was killed in the attack at a bus stop at the Gush Etzion junction in the third such West Bank attack on Sunday. It was the third such attack of the day in the West Bank, and the second at the junction in the last four days. In light of the multitude of violent incidents at the flashpoint junction, the security establishment was also reportedly weighing steps to separate Israelis and Palestinians in the area, according to Channel 2.
Scene of stabbing attack in Gush Etzion
Meanwhile, a Palestinian media report alleged that a contingent of IDF forces was headed to demolish the home, in the West Bank village of Beit Fajar, belonging to the family of the terrorist identified in the attack. IDF forces who responded to Sunday’s attack immediately shot and killed the suspected stabber, who was identified as Atzam Tuabata, a 34-year-old resident of village near Bethlehem.Following Sunday's attack, Magen David Adom paramedic Zaki Yahav said that when he arrived at the scene he saw “a young woman in her twenties lying unconscious with stab wounds to her upper body on the sidewalk near the bus stop.”“People at the site had begun to provide first aid and they were trying to stop the bleeding. We quickly moved her into the ambulance and evacuated her to the hospital on a respirator,” Yahav said.Buchris was pronounced dead at Shaare Zedek Medical Center in Jerusalem.The head of Shaare Zedek’s trauma unit, Doctor Ofer Marin said Buchris had multiple stab wounds in her head and chest and was not breathing and did not have a pulse when she arrived. The hospital’s medical staff was unable to revive her, Marin said.Buchris was studying at the Zohar seminary in the Bat Ayin settlement near Gush Etzion. She had just returned to Israel a few weeks ago from a half-a-year trip to India. She will be buried at the Har Hamenuhot cemetery in Jerusalem on Monday afternoon.Jpost.com Staff contributed to this report.