Ambassador to UNHRC: 'Israel does not behead people, we use our heads'

Eviatar Manor spoke in advance of the upcoming report on last summer's war with Hamas, in which Israel is expected to be charged with war crimes. 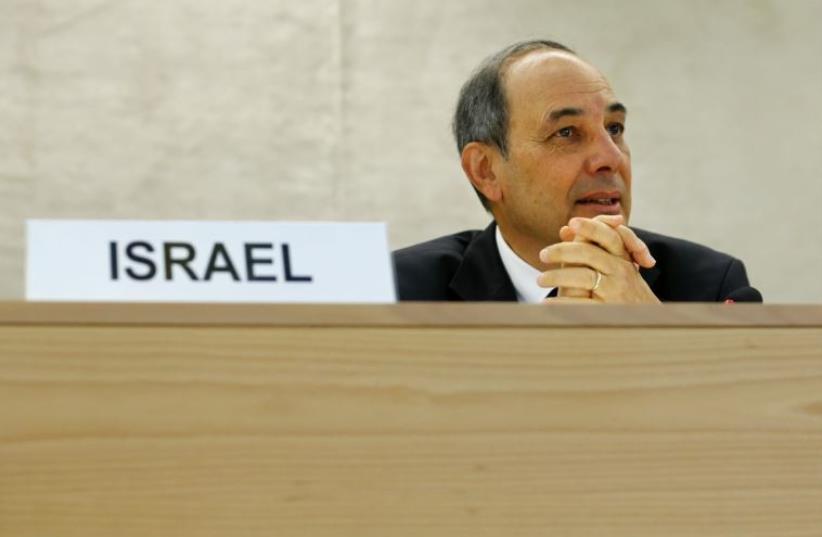 Eviatar Manor
(photo credit: REUTERS)
Advertisement
“Israel does not behead people. We use our heads to create innovation,” Israel’s Ambassador to the UN Human Rights Council in Geneva Eviatar Manor said on Monday as he delivered an unusual speech in defense of his country.The UNHRC has a growing obsessions with Israel, said Manor as he spoke on the first day of its 29th session, which will last for three weeks.Since the UNHRC’s inception in 2006 it has dispatched six fact-finding missions into Israeli human rights violations and issued at least 60 country resolutions against it,” Manor said.This kind of behavior shows that the council “exhibits double morals and is ethically flawed,” Manor said. “Israel does not cut off [the] hands of people. We use our hands to vote in ballot boxes. Israel does not stone women. We empower women," said Manor as he alluded to the atrocities committed by some of Israel's neighbors and regional terrorist groups.“Amos Oz, the well-known Israeli author, says there are degrees of evil and one who cannot make a distinction ends up serving evil. You have been advised,” he warned.Manor spoke in advance of the UNHRC’s release of its report on Israel’s war with Hamas, in which its expected to charge Israel with war crimes.The UN High Commissioner of Human Rights Zeid Ra’ad al-Hussein said in Geneva on Monday said that those who violated human rights against civilians in Gaza should be prosecuted.Israel on Sunday released a report in which its defended its actions and said that they fell within the bounds of international law. It charged that Hamas committed war crimes by indiscriminately firing at Israel from densely populated civilian areas.According to Israel 2,125 Palestinians were killed, of which 936 were combatants. The identities of another 428 has yet to be determined. In spite of al-Hussein’s harsh words on Gaza, when he spoke to the UNHRC, he devoted more time to discussing the ongoing civil war in Syria.“The conflict in Syria is the most mind-numbing humanitarian crisis of our era, and the magnitude and nature of its human rights violations pose a defining test of what we so often term the international community,” Al-Hussein said. “After more than four years of a sustained campaign of terror directed by the Government against its own people, and the rise of non-State actors capable of the most appalling horror, this conflict has killed at least 220,000 women, men and children and blighted the lives of countless others. “It has forced the largest movement of people since the Second World War, with well over 7 million people displaced within the country and 4 million fleeing it. If the words "international community" are to mean anything, they must mean that we collectively bring assistance and protection to the Syrian people,” al-Hussein said.