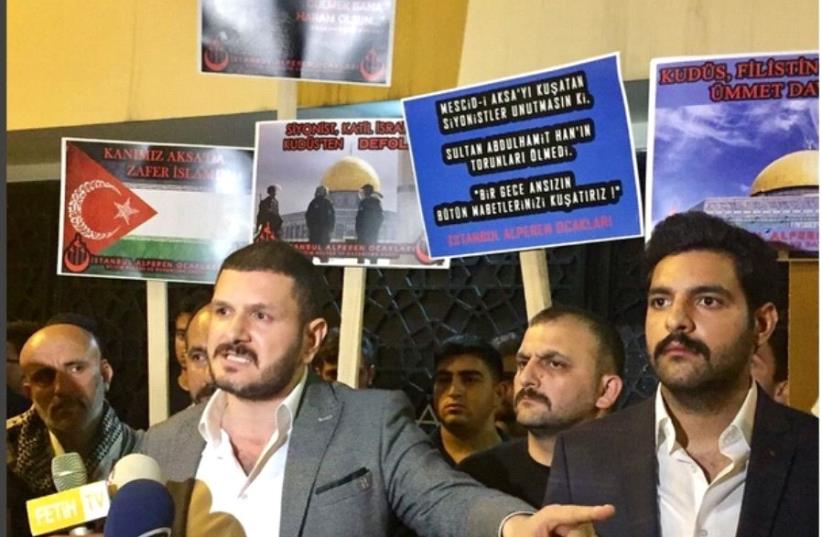 Kürşat Mican, one of the demonstrators, speaks to reporters about the group's intent to continue protesting.
(photo credit: KÜRŞAT MICAN/INSTAGRAM)
Advertisement
Demonstrators in Istanbul protesting the installation of metal detectors at entrances to the Temple Mount in Jerusalem kicked a synagogue’s doors and threw objects at it.Several dozen men gathered around Neve Shalom with anti-Israel signs on Thursday night in what the Turkish Jewish community on Twitter called “intimidation and provocation.” The community called on authorities to make sure it “stops” and see that those responsible are prosecuted for a hate crime.One demonstrator, who identified himself as Kürsat Mican, told reporters at the synagogue: “The Zionists prevent our brethren’s freedom of worship [on the Temple Mount]. We are here to block you from your freedom of worship. No matter if we are stopped here today, we will come tomorrow. No one can enter here.”Photographs of the incident show some of the demonstrators tossing the signs they carried at the synagogue doors.Murat Yetkin, a Turkish journalist and columnist for the Hurriyet daily, condemned the incident.Reactions to Israel’s actions “should not be directed toward the Jewish community, a part of Turkish society, citizens, with the threat of violence,” he wrote. Approximately 20,000 Jews live in Turkey.Reacting to the incident, Celal Altuntas, a Turkish dissident author living in the Netherlands, wrote on Twitter that “the Jewish community in Turkey does not feel safe.”Ivo Molinas, the editor-inchief of the Jewish community’s Salom weekly, wrote on Twitter: “I am a Turkish citizen.Why do you protest outside my place of worship?” The Anti-Defamation League and the World Jewish Congress condemned the incident.“We trust the Turkish government will provide necessary security,” ADL wrote on Twitter.“The World Jewish Congress profoundly condemns the hostile demonstrations that took place last night outside of the Neve Shalom synagogue in Istanbul,” WJC President Ron Lauder said.“We trust that the Turkish government and all relevant authorities will take the necessary precautions to protect the Jewish community and ensure its safety,” Lauder said.But a statement Turkish President Recep Tayyip Erdogan released on Saturday made no mention of the attack on the synagogue, instead slamming Israel for its new security measures and demanding that they be removed immediately.Tamara Zieve contributed to this report.