Separate shooting and stabbing attacks carried out by male and female Arab assailants in and outside Old City. 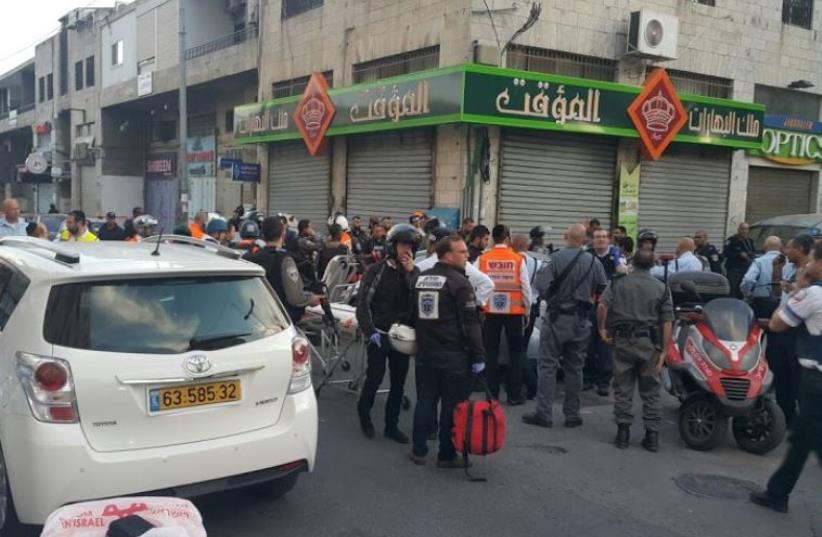 Scene of Jerusalem shooting attack
(photo credit: MEDABRIM TIKSHORET)
Advertisement
Two Border Police officers are in critical and serious condition after being shot in the head by an Arab terrorist outside the Old City’s Nablus Gate in east Jerusalem early Tuesday evening. Following a brief chase, the terrorist was shot dead at the scene.Shortly after 5 p.m., police said the unidentified male assailant fired a Carl Gustav improvised semi-automatic gun at the officers while they were patrolling the well-travelled Slah Ad-Din Road, just outside the Old City walls, approximately 300 meters from Damascus Gate.“Shots were fired on officers who were on a regular patrol in and around the area, and as a result we have two officers down who were seriously injured,” said Police spokesman Micky Rosenfeld at the scene of the attack.“All of our police units responded in the area, and the terrorist was spotted with an improvised automatic weapon, chased, and shot and killed at the scene.”Both officers were treated at the scene by United Hatzalah of Israel paramedics before being rushed to Hadassah University Medical Center in Ein Kerem, he said.“Our bomb disposal experts are continuing to search for explosives in the area, and our forensics team is present to collect evidence,” Rosenfeld added.As hundreds of curious Palestinians passively watched the chaotic scene unfold in the Arab neighborhood, dozens of heavily armed officers cordoned-off the area and searched for other possible suspects.“At this moment in time we’re continuing security measures for the [US Vice President Joseph] Biden visit, which is beginning this evening here in Jerusalem, and heightened security continues as long as necessary,” Rosenfeld said.United Hatzalah volunteer Daniel Katzenstein said his command center received a call about the shooting at 5:10 p.m. on Slah Ad-Din Road.“It was originally not clear how many victims were injured,” he said. “We immediately dispatched our ambu-cycle unit, which raced to the scene, and our first responders reported active gunfire when they arrived, which continued for some time.”Katzenstein said that despite the gun fire, the paramedics were able to access and treat one of the victims, who remained conscious after being shot in the head.“We treated him until police secured the entire area, and then went with police to treat the second victim, who was more seriously injured and required CPR after losing consciousness and deteriorating at the scene,” he said.At 7:30 p.m., Hadassah University Medical Center spokeswoman Hadar Elboim said that one of the officer’s, who is 48 years old, remains in critical condition in the intensive care unit.“He’s in very bad condition and his life is at risk,” said Elboim.The other officer, who is 31, remains conscious and is in moderate-to-serious condition, she said.“Both their families are with them,” Elboim added.Earlier on Tuesday morning, a knife-wielding Arab woman in her 50s was shot dead in Jerusalem after attempting to stab a Border Police officer in the Old City’s well-travelled Haguy Street.At approximately 10 a.m., police said the unidentified woman from east Jerusalem approached a group of officers carrying out security measures in the area, which have been considerably heightened for US Vice President Joe Biden’s visit.“She pulled a knife from her bag and tried to stab one of the officers, who acted immediately and responsibly upon realizing his life was in immediate danger and shot and killed the woman,” said Rosenfeld.“She was pronounced dead at the scene, the knife was seized as evidence, and the area was immediately cordoned-off.”None of the officers were wounded, he said, and a coroner arrived minutes later to collect the corpse.Rosenfeld said an investigation has been launched to determine who the woman is, and if she acted alone or is part of a terror cell.In the meantime, he said security measures have been implemented throughout the capital for Biden’s visit, with an emphasis on the downtown area and Old City.“Several hundred officers are involved in security operations to ensure safety over the next two days during his visit,” Rosenfeld said.“Police are continuing security patrols to provide an immediate response to terrorist attacks,” he added.    Most terrorist activity in the Old City and capital has been concentrated outside east Jerusalem’s Damascus Gate, where several deadly attacks have been carried out and thwarted since the terror wave engulfed Jerusalem last October.The flashpoint area outside Damascus Gate continues to be densely patrolled around the clock by security personnel.