Prosecution requests to hold Bisti in police custody until the end of his trial. 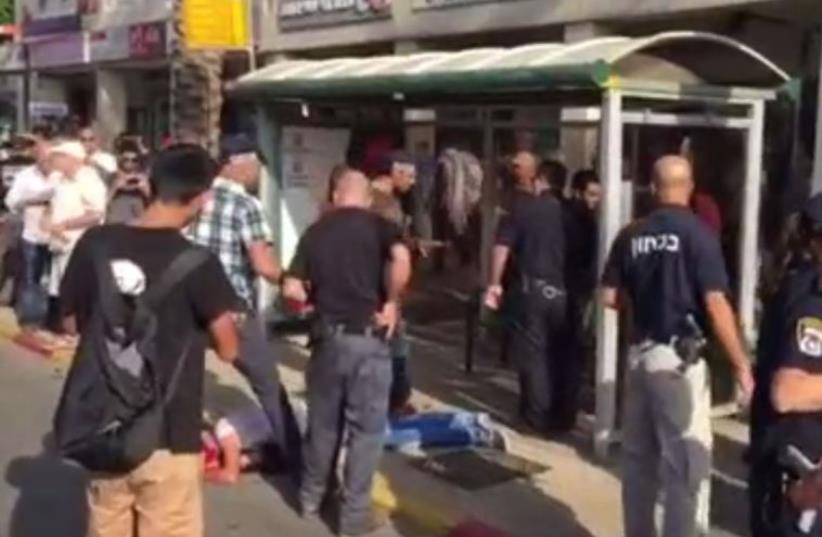 Scene of stabbing attack in Ra'anana
(photo credit: DOVID DAVID)
Advertisement
The Central District Attorney’s Office on Sunday filed an indictment with the Lod District Court against Khaled Bisti, 28, from east Jerusalem, for four counts of attempted murder in a stabbing spree in Ra’anana.On October 13, Bisti decided that he would use a knife to try to murder and wound Jews, hoping that he would “merit” being killed afterward as a “shahid” (martyr), said the indictment.Bisti allegedly took a serrated knife which he concealed under his shirt and traveled to a bus stop at 34 Jerusalem Street in Ra’anana.At 10:32 a.m., he approach several persons waiting for a bus whose backs were turned to him and tried to murder A.A. by stabbing A.A. three times, in the head, the shoulders and the back of the neck, stated the indictment.A.A. was not killed, but was badly wounded including in several areas of the body, requiring surgery to remove the blade of the knife and with extensive damage to the left eye.Next, Bisti attacked B.B. and another bystander whose identity is unknown to the prosecution, but he did not realize that part of the blade of his knife had broken off and was still sunk into the body of A.A., the indictment alleged.According to the indictment, Bisti’s blows to B.B. and the third victim came from the handle side of the knife.While these blows caused B.B. and the third victim harm, they did not wound them as badly as A.A., and Bisti, in the rage of the moment, thought that he was still stabbing them with the sharp end of the knife.B.B. did have wounds, heart problems, required catheterization and was hospitalized for several days.Bisti continued in the same fashion chasing down a fourth bystander, who by this time was trying to run away having realized the danger posed by Bisti, and struck the fourth victim with the handle side of the knife, said the indictment.The prosecution did not have information about the severity of the injuries to the third and fourth victims and also did not respond to inquiries about how Bisti traveled to Ra’anana or chose Ra’anana as a target, with Ra’anana not having been targeted often in the past.The prosecution requested to hold Bisti in police custody until the end of his trial.