Israeli authorities arrest east Jerusalem man on charges of suspected terror activity shortly after release from prison for attempting to poison Israelis in 2002. 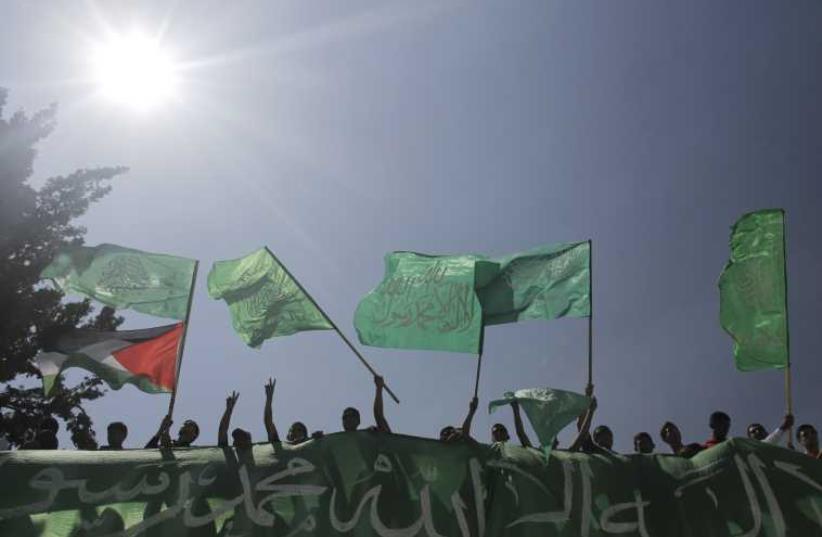 Palestinians wave Hamas and Palestinian flags
(photo credit: REUTERS)
Advertisement
Jerusalem police on Thursday rearrested an Arab man on terror-related charges a mere three days after he was released from a 14-year prison sentence for attempting to poison Israeli patrons at a cafe in the capital, authorities announced Friday. Police said east Jerusalem resident Sufian Abdu was caught in possession of Hamas flags and was being held on suspicion of supporting a terrorist organization, incitement and membership in a terrorist group. Abdu was previously arrested in 2002 for plotting to poison Israelis at Jerusalem’s Cafe Rimon, where he worked. Following his release from jail, he returned home to the east Jerusalem neighborhood of Jabel Mukaber, where a celebratory event was held in his honor. According to police, Abdu arrived to the festivities along with an entourage hailing flags representing the Palestinian terrorist group Hamas. In light of the incident, he was arrested by Israeli authorities and interrogated. Following his arrest, Abdu was brought to the Jerusalem Magistrate’s Court, where his remand was extended until Monday.