Mohammad Jamal Kaluti, 21, carried out a shooting attack on an Egged bus in the capital's Ramot neighborhood Wednesday morning accompanied by another Palestinian. 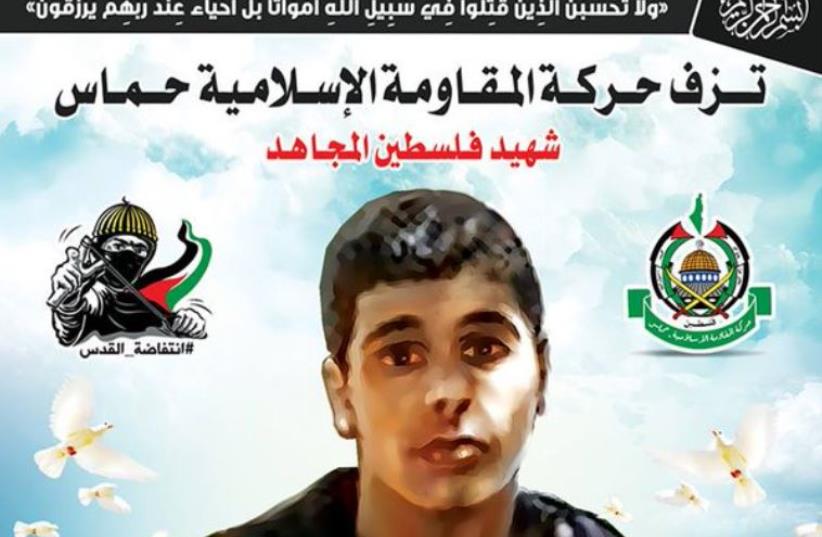 Hamas eulogizes Mohammad Kaluti
(photo credit: HAMAS MEDIA)
Advertisement
The Palestinian terrorist who carried out a shooting attack in Jerusalem Wednesday had demanded in his last will that Palestinian factions not claim responsibility for the terror attack he carried out.Mohammad Jamal Kaluti, 21, carried out a shooting attack on an Egged bus in the capital's Ramot neighborhood Wednesday morning accompanied by another Palestinian, Abdel Malik Abu Kharub. After the two opened fire on the bus from a car they were driving in, they fired again at security forces, injuring a police officer. They were shot by Israeli policeman and died later.In his last will, Kaluti demanded the Palestinian factions: "Do not claim responsibility for my martyrdom-seeking operation. I do not belong to any faction and my martyrdom is a sacrifice for Allah."Kaluti's demand demonstrated a prevalent tendency among Palestinian terrorists in the recent wave of violence – disassociating themselves from official Palestinian terror organizations such as Hamas and Islamic Jihad, who are no longer regarded as the champions of Palestinian resistance.Notwithstanding his request, following the shooting attack, Hamas released a eulogy for Kaluti, describing him as a "brave martyr," and posting his image next to Hamas' logo. In his last will, Kaluti also told his family: "Do not get upset because our house will be demolished."
In addition, Kaluti asked "Islamic armies" to "immediately act in order to liberate al-Aksa mosque."
Advertisement
Subscribe for our daily newsletter