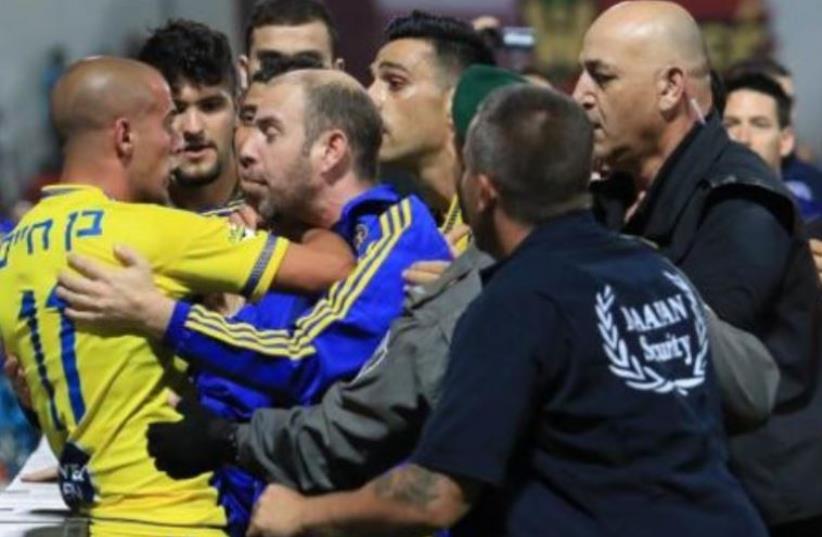 Maccabi Tel Aviv players and security staff engage in fisticuffs at Doha Stadium in Sakhnin
(photo credit: SPORT1)
Advertisement
A brawl in a soccer match between Israeli Premier League foes Bnei Sakhnin and Maccabi Tel Aviv has aroused nationalist and sectarian tensions, with Joint List MK Ahmad Tibi entering the fray and condemning a Maccabi player who made a provocative statement questioning Arab spectators’ loyalty to the state.Tensions boiled over following Monday’s encounter at Doha Stadium in the Arab village of Sakhnin, with both benches clearing and a brawl only being averted by security forces.Maccabi and Sakhnin were playing just four days after their volatile showdown in the State Cup semifinals.A Tal Ben-Haim winner with five minutes to play gave Maccabi a dramatic 3-2 win over Sakhnin in an enthralling cup affair at Haifa Stadium last Thursday, booking the yellow-and-blue a meeting with Maccabi Haifa in the final next month.However, what has dominated the headlines ever since has been the controversy surrounding Maccabi’s first goal of the match, with Sakhnin coach Yossi Abuksis being sent off for his protests after Tel Aviv continued play even though Ali Osman allowed the ball to roll out in order to receive treatment for his injury.Abuksis clashed with the Maccabi bench following the final whistle on Monday, and the coach was kicked by Maccabi goalkeeper Predrag Rajkovic during the ensuing melee.After Monday’s match, which ended in a 0-0 draw, Maccabi star striker Eran Zahavi was quoted as saying: “I don’t know if we played the match in Israel or in Ramallah.”In response, Tibi slammed Zahavi and Maccabi Tel Aviv for poor sportsmanship.“Soccer isn’t just about gaining points in the standings, but it’s also about values and fair play,” the lawmaker said. “Maccabi Tel Aviv lost a good deal of points in this regard in both matches against Sakhnin.”Maccabi is in a close race for the Premier League title with Hapoel Beersheba, the club currently in first place.“Nobody will shed a tear if Hapoel Beersheba becomes champion,” Tibi said.Tibi also took Zahavi to task for his “Ramallah” comment, saying: “That is a very blunt statement by an arrogant player. Zahavi and some of his friends are the ones who behaved in an unsportsmanlike, nationalistic fashion. There’s a reason that many people think Maccabi is the most arrogant team in the country.”On his Twitter account, Tibi posted a picture taken by a Maccabi Tel Aviv fan site showing three rows of team supporters wearing shirts that spell “This is the state of the Jews.”Above the picture is a caption that reads: “May their village be burnt.”Tibi responded: “The village hasn’t been burnt.”


Allon Sinai contributed to this report.