Mohammad Allan has been on hunger strike for 59 days. 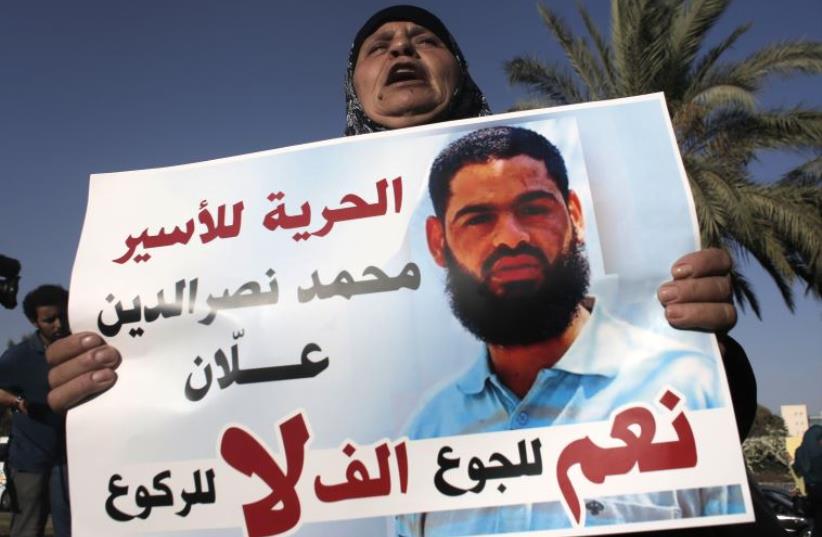 Maazouze, the mother of Mohammed Allaan, a Palestinian prisoner who is on a long-term hunger strike, holds a portrait of her son during a rally calling for his release.
(photo credit: AHMAD GHARABLI / AFP)
Advertisement
Fighting broke out between Jews and Arabs Wednesday night at Barzilai Medical Center in Ashkelon, as a demonstration in solidarity with a Palestinian hunger striker turned violent.A spokesman for the Ashkelon police said a group of Israeli Arab protesters holding a rally outside the hospital were confronted by a group of local Jews who stood across from them yelling racist anti-Arab slogans such as “Muhammad is a pig,” with some carrying signs that police said constituted incitement.On the Arab side, protesters began to wave Palestinian flags, which police said was not part of the approved demonstration.No one was hurt, but police said several people suspect - ed of throwing rocks and disturbing the peace were arrested on both sides.The protest was organized by a group of Israeli Arab lawyers in support of Muhammad Allan, reputedly a member of Islamic Jihad who has been on hunger strike for 59 days and was moved to Barzilai on Monday from Soroka University Medical Center in Beersheba.Amid fears that Allan would be force-fed at Barzilai, the hospital put out a statement on Monday saying that the facility’s management sees forced-feeding as “a drastic step that is not in line with medical ethics. Therefore, it must be done with the consent of the patient or reserved only for situations where health has declined to [a point] where drastic treatment is needed to save a life.”