MK Jabareen to Post: After the holidays, we plan to meet with all EU ambassadors about issues effecting Arab sector. 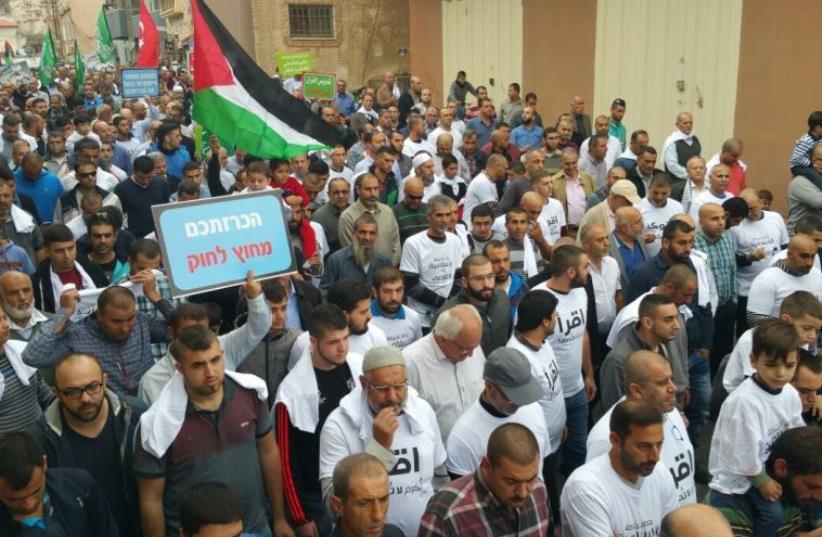 Protest in Umm al-fahm on Saturday, November 28, against banning of the northen branch of the Islamic Movement
(photo credit: JOINT LIST)
Advertisement
The Joint List is planning a diplomatic offensive after the holidays to try to increase pressure on the Israeli government to reverse the ban it imposed on the Islamic Movement, a Joint List MK involved in the effort told The Jerusalem Post on Tuesday.The Joint List will also raise other issues, such as its complaint about the lack of an adequate budget increase for the Arab sector.“After the holidays, we plan to meet with all EU ambassadors to discuss these issues,” Joint List MK Yousef Jabareen (Hadash) said.Jabareen, who heads the Joint List international team, said that “this is part of our international advocacy endeavors, which are becoming one of the main advocacy tools of the Joint List.”“We believe that the human rights of our community are not just a local issue and that the international community has a role to play,” he said.Jabareen, along with Joint List MKs Jamal Zahalka (Balad) and Osama Sa’adi (Ta’al), met two weeks ago with Lars Faaborg-Andersen, the EU ambassador to Israel.The issue of the ban on the Islamic Movement and the Arab demand for an increased share of the state budget were discussed during the meeting, according to Jabareen.The Arab community in Israel is up in arms over the ban of the Northern Branch of the Islamic Movement.Both the Northern and Southern branches of the movement are highly integrated into Arab society and have the support of most Muslim citizens.A budget deal has long been in the works, with Prime Minister Benjamin Netanyahu deciding at the end of August to transfer a budget supplement of NIS 900 million to Arab municipalities, but talks have stalled. The government will decide on Wednesday whether to approve additional budgetary funds for a five-year development plan in the Arab sector.The five-year plan, which is reportedly estimated at NIS 15b., would increase funding for housing, education, infrastructure, welfare services, public transport and for boosting the employment of Arab women. Arab leaders call the plan a step in the right direction, but inadequate.