“In the past, Israel has presented itself as a democratic country. But Netanyahu with this apartheid law has made Israel into a racist state." 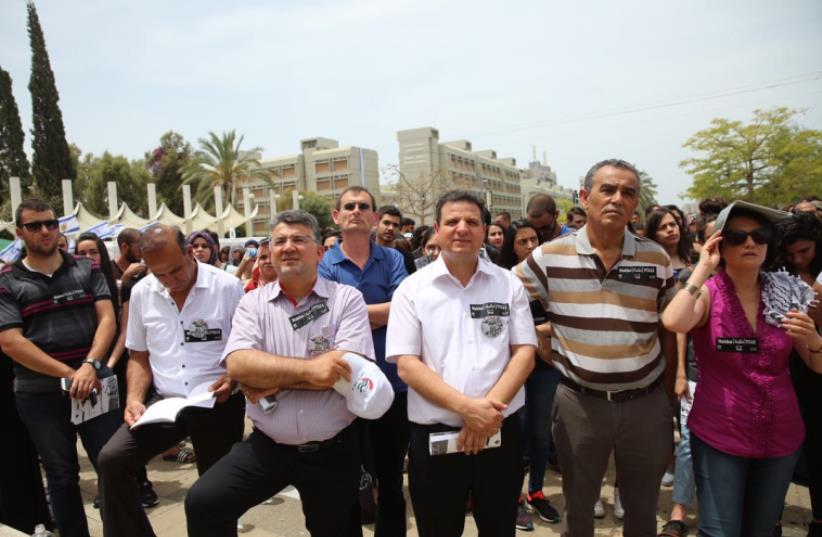 Joint List MKs Ayman Odeh, Jamal Zahalka and Haneen Zoabi at the Tel Aviv University Nakba Day protest
(photo credit: JOINT ARAB LIST)
Advertisement
Joint List MKs Ahmad Tibi and Jamal Zahalka met in Cairo Tuesday morning with Arab League Secretary-General Ahmed Aboul Gheit and received his support in their international efforts against the controversial Nation-State Law.
Aboul Gheit told the MKs that the foreign secretaries of the countries in the Arab League would discuss the new law during a future meeting in Cairo, and would persuade other countries around the world to take action against Israel.“This law is racist,” Aboul Gheit said. “In the past, Israel has presented itself as a democratic country. But [Prime Minister Benjamin] Netanyahu with this apartheid law has made Israel into a racist state.”Tibi and Zahalka explained the ramifications of the law on the Arab sector and on the Israeli-Palestinian conflict. They told him the law creates “blatant racism against its Arab citizens and cancels any possibility of there being two states for two people.”The meeting was one of a series for Tibi and Zahalka, who have been going around the world seeking condemnation of Israel for passing the law. They went with five other Joint List MKs to the European Union in Brussels last week, and they will be going to the United Nations office in Geneva in two weeks.At their meeting, Tibi and Zahalka also condemned US President Donald Trump for his administration’s decision to close the Palestine Liberation Organization office in Washington. Tibi called the move “revenge against the Palestinian people.”Yisrael Beytenu MK Oded Forer responded to Tibi and Zahalka’s meeting with the Arab League by accusing them of “spitting in the face of the country that pays their salaries.”