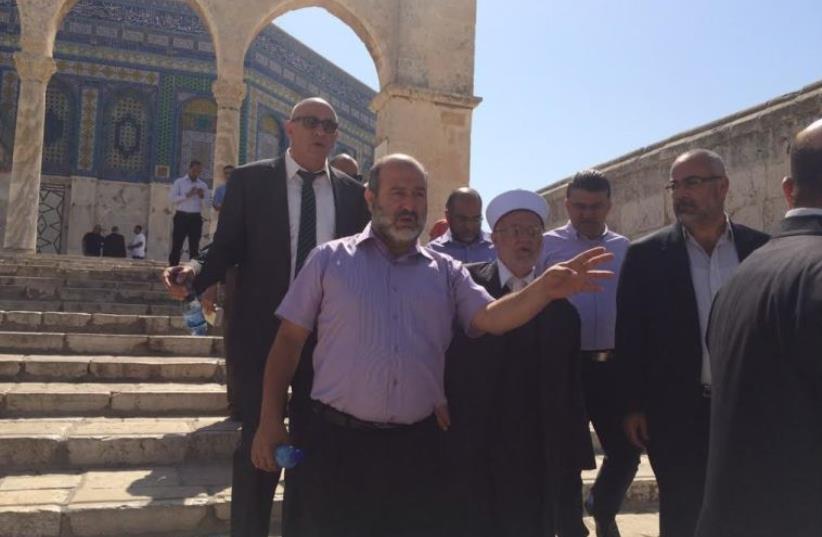 Joint list mks on Temple Mount
(photo credit: JOINT LIST)
Advertisement
A number of Joint List MKs visited al-Aksa Mosque on the Temple Mount on Tuesday and warned that “an attempt to divide al-Aksa will ignite the region in another war.”The participating MKs included: Joint List head Ayman Odeh (Hadash), Ahmad Tibi (Ta’al), Masud Gnaim (UAL), Jamal Zahalka (Balad), Basel Ghattas (Balad), Haneen Zoabi (Balad), Yousef Jabareen (Hadash), Osama Sa’adi (Ta’al), and Abdel-Hakim Haj Yahya (UAL).They met with representatives of the Islamic Wakf, led by Mufti Muhammad Hussein, the grand mufti of Jerusalem and head of the Wakf.During the visit there was an attempt by a religious Jew to “invade the mosque guarded by Israeli security forces,” one of the party accused.The visit came after recent heightened tension at the site when masked, rock-throwing Palestinians clashed with police on Sunday.Violence at the site has flared in the past year as Muslims have been riled by visits by non-Muslims, including religious nationalist Jews to the compound, who have been pushing the government to allow Jews to pray there.The Joint List issued a statement fol - lowing the visit to al-Aksa condemning “provocative incursions by extreme right-wingers and settlers carried out under the cover of the police.”“Netanyahu and his extreme settler government are trying to create facts on the ground and undermine the independence of Muslim holy sites in occupied territory, which are protected by international law,’ said the Joint List.“The continuation of the desecration of al-Aksa gives a boost to the extremists and legitimizes attacks and ‘price tag’ activity against the holy places of the Palestinian people,” the statement added.The Joint List claimed that the mosque and all of the surrounding area is a holy Muslim site and that it must be protect - ed and respected. In addition, it said, “any attempt to change the status quo will escalate and cause another real war.”Reuters contributed to this report.