Israeli police raided the plaza outside Jerusalem's al-Aqsa mosque on Sunday in what they said was a bid to head off Palestinian attempts to disrupt visits by Jews and foreign tourists. 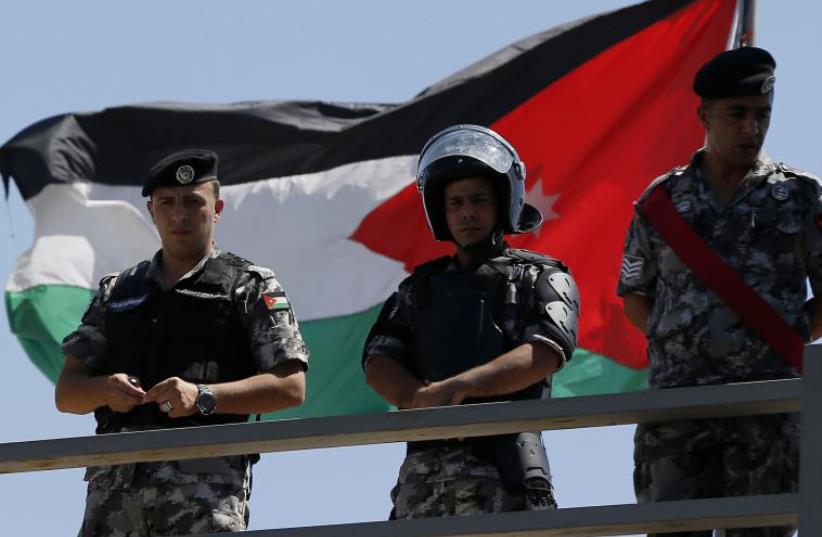 Jordanian riot police stand guard in front of a Jordanian flag as protesters hold a demonstration against Israel in Amman
(photo credit: REUTERS)
Advertisement
The Jordanian government on Sunday condemned Israel for what it terms as the "storming" of Muslim holy sites in Jerusalem's Old City.Israeli police raided the plaza outside Jerusalem's al-Aqsa mosque on Sunday in what they said was a bid to head off Palestinian attempts to disrupt visits by Jews and foreign tourists on the eve of the Jewish New Year.The Palestinian youths, Israeli police said in a statement, had intended "to disrupt the routine of visits to the Temple Mount on the eve of Rosh Hashana", the Jewish New Year, which begins at sunset on Sunday.Police used tear gas and threw stun grenades towards the Palestinian youths, who barricaded themselves inside the mosque and hurled rocks and flares, a Reuters witness said."A police force ... surprised the barricaded youngsters and entered the Temple Mount area" so that the visits could get under way, the statement added.Jordan, which claims a special status as the Arab and Muslim world's custodian of the Islamic shrines and mosques on Temple Mount, warned Jerusalem that it was in danger of crossing "a red line" by stoking tensions at the site."Jordan will firmly counter all attempts targeting the city's holy sanctities, stemming from the Hashemite custodianship of Jerusalem's sacred places," Jordanian Foreign Minister Nasser Judeh said in a statement carried by official state media in Amman."Jordan will spare no effort to contact world powers and international organizations to put an end to the recurring Israeli violations and attacks against the holy city's shrines."The Hashemite monarchy reiterated its call for the resumption of Israeli-Palestinian peace talks which would bring about a two-state solution and an end to the conflict.