Israeli President Reuven Rivlin notified Foreign Minister Israel Katz about the decision to reopen the site as part of talks that began during a meeting with Jordanian officials in London. 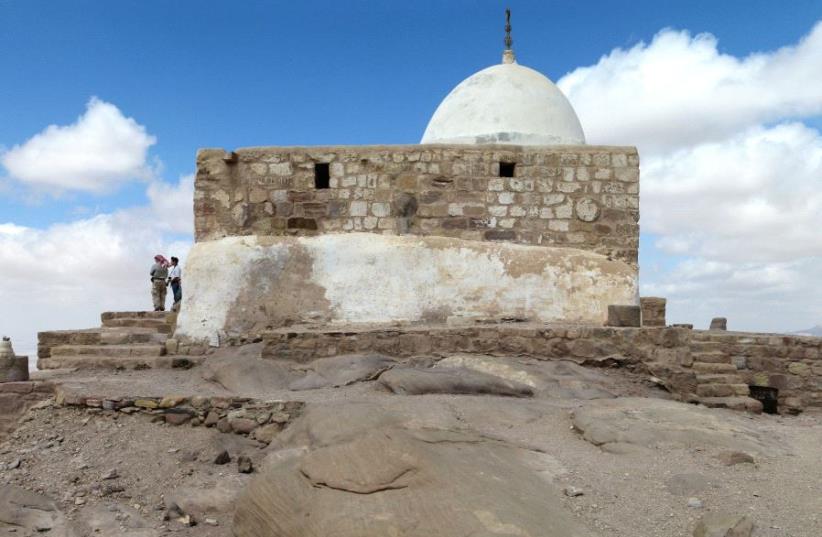 Aaron's Tomb
(photo credit: WIKIMEDIA COMMONS / JONEIKIFI)
Advertisement
Aaron’s Tomb, located in Jordan, will be reopened to Israeli visitors after being closed in August when Israeli tourists were filmed performing “Jewish rituals” at the site, according to Maariv.President Reuven Rivlin notified Foreign Minister Israel Katz about the decision to reopen the site, as part of talks that began in London last week during a meeting with Prince Ghazi bin Mohammed, personal envoy and chief adviser to King Abdullah II for Religious and Cultural Affairs. Talks continued in Jordan after the meeting, and the decision was made to reopen the site where the High Priest Aaron is believed to be buried.Rivlin asked Katz to instruct the relevant diplomats to continue to coordinate the understandings that will allow Israeli groups to visit the site if arranged earlier and with a security escort and guide at the site.In an interview with Ynet, tour guide Roni Ayalon, who was with the group of tourists, described being subjected to humiliating treatment by Jordanian authorities.“They just stripped down all of us,” he said. “They took off the women’s head scarves. All the boys’ yarmulkes were taken off. They took off everyone’s shirts to see if they had tzitzit under their clothes and took [the tzitzit] off them. They confiscated any religious symbols they found on us.“If there was this kind of humiliation of an Arab on our side who wanted to enter Jerusalem and they would dare to tell him to take off his shirt or confiscate his Koran, there would be a world war,” Ayalon said. “All the Arabs would jump up. But they can do whatever they want to us.”Purported photos of Jewish tourists at the site which circulated through Jordanian media showed them praying with a Torah scroll.“None of us came to make a mess,” said the tour guide. “There was one boy who had a bar mitzvah, and at Aaron’s Tomb we made a little celebration for him. When the policeman saw that we were singing, he quieted us and said that it’s forbidden for us to sing.“I don’t know who read from a Torah scroll. Our groups acted according to the book. We tried to act in a subdued manner and without opposition, but the behavior [of the authorities] was awful.”According to Ayalon, the group was forbidden from praying while traveling in Jordan, even in their hotel room.Aaron’s Tomb was closed by Jordan’s Ministry of Awqaf Islamic Affairs and Antiquities after the “illegal entry” of Jews to the site without the ministry’s knowledge, according to Arab media. The ministry also ruled at the time that all visitors would have to obtain approval from the Awqaf in the Ma’an Governorate before entering.The Awqaf ministry strongly condemned the entry of the tourists, adding that an investigation will be opened to find out what happened and who was responsible for allowing them into the site, according to the official Jordan News Agency.Located on a mountain in the area of Petra, the site is believed to be the grave of the biblical High Priest Aaron, brother of Moses.Former Jordanian tourism minister Maha al-Khatib stated that the Israeli ambassador in Jordan filed a complaint against measures taken to limit the actions of Israeli tourists, including the requirement for a guide during tours and a prohibition against wearing religious clothing, according to Al Mayadeen. Khatib also accused tourists of attempting to smuggle in religious clothing.The former tourism minister also accused Israeli tourists, whom she called “the most miserable tourists who make trouble,” of attempting to bury items at various sites in Jordan to “confirm” their claims of their history in the area.“There is a Zionist scheme to claim ownership of any part of our Arab homeland, especially in archaeological sites,” said Khatib, according to the Shebab News Agency. “They want to convince the world that any place they went through even for two nights in the old days is their right, but we are not allowed to mention the history of our existence.”Tensions have been high between Israel and Jordan in recent months, especially surrounding issues such as the Temple Mount, Jordanian citizens arrested in Israel, the arrest of an Israeli citizen in Jordan, and the return of agricultural land to Jordan in Naharayim and Tzofar.At the Temple Mount in Jerusalem, visits by religious Jews are monitored by Wakf guards and Israeli police, and all Jewish prayer, including silent prayer, is forbidden, and no sacred Jewish objects, such as prayer books or prayer shawls, may be brought onto the Mount.An official statement by Rivlin’s office last week stated that the president had discussed Christian holy sites with Jordanian officials, but did not mention Aaron’s Tomb as a subject of discussion.Jeremy Sharon contributed to this report.