The Ashdod-based squadron of about a dozen patrol boats is tasked with preventing seabased terror attacks as well as the interdiction of fishermen who stray far from the coast. 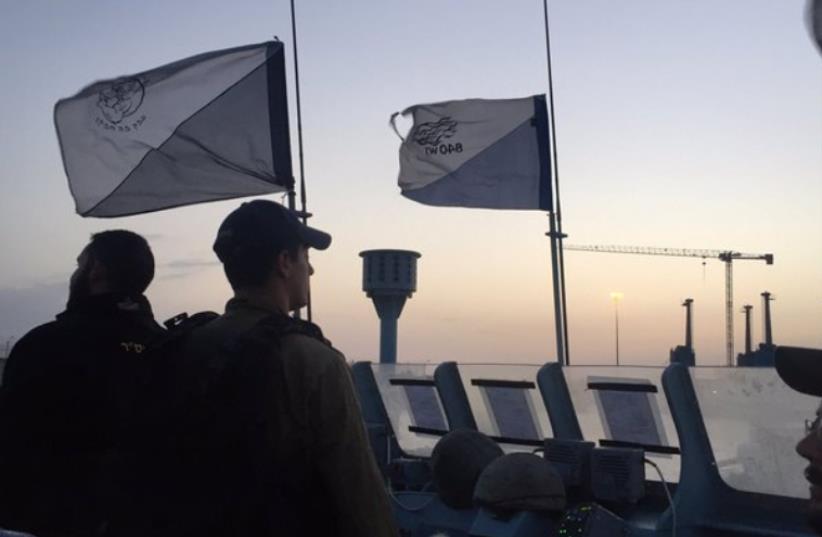 IDF conducting security exercise
(photo credit: SETH J. FRANTZMAN)
Advertisement
OFF THE GAZA COAST – Five bright white lights bobbed up and down on the horizon. The sea was calm, and the air a mild 22 degrees. It was midnight and the Israel Navy’s Shaldag (Kingfisher)-class fast patrol boat was off the coast between the border of Israel and the Gaza Strip. “The lights you see are fishermen from Gaza,” explained Lt.Yossi Akrish, commander of the ship. “We see them using these lights every night to attract plankton, which fish feed off of.”The navy’s patrol squadron 916, which is based at Ashdod Port, was out at sea this week patrolling Israel’s shoreline. Since Israel’s unilateral disengagement from the Gaza Strip in 2005, the navy has increased its patrols off the Gaza coast. In 2006, it imposed a 9-km fishing range for Gazans while enforcing an overall sea blockade. On April 1, though, Israel announced it would extend the Gaza fishing zone to 14.5 km as a goodwill gesture to the Palestinian fishermen.The Ashdod-based squadron of about a dozen patrol boats is tasked with preventing seabased terror attacks as well as the interdiction of fishermen who stray far from the coast.The 12-man crew of the Israel Shipyards built-Shaldag boat take pride in their vessel. It has a Rafael Typhoon .25 mm gun up front, a .50 cal cannon mounted at the stern, and two MAG machine guns mounted on the bridge. The sailors are often at sea for days at a time, sitting atop thousands of liters of fuel, and sleeping in shifts.This week’s patrol began after sunset, and continued for six hours as the boat practiced intercepting suspicious vessels. L-Rtg. Yuval Mordov, who is trained as both a mechanic and a combat gunner, has been on the ship for six months since completing basic training. “We train to be ready for the next war, but usually we deal with fishermen,” he said. “Ninety-nine percent of the time they are just fishing, but there is the 1 percent that are Hamas and we practice confronting the one percent.”During the exercise, the crew practiced intercepting a suspicious vessel, played by another Israeli boat, and communicating with its crew. L-Rtg. Amir Ammar, who grew up in the Galilee Druse village of Peki’in, is the lone native-Arabic speaker on board, and orders the suspicious vessel to stop. All the squadron’s boats have crew who know some Arabic, he says, but native speakers are rare. After attempting to stop the potentially threatening boat, the crew conducted a mock firing drill to disable its engine, and then pulled up alongside it. They ordered the men in the suspicious boat to cluster at the stern. Then, they trained for the possibility that the suspicious men might jump overboard, or that another boat might fire on them. The Shaldag took evasive maneuvers and careened around in a wide ark to maneuver. At its top speed, the patrol boat can do 45 knots, which in heavy seas makes one feel he might bounce overboard.After the commander assessed the men’s performance, he took his ship and another vessels from the squadron further out to sea to for livefire target practice. With two oil platforms in the distance and the lights of Gaza and Ashkelon far in the distance, the ships made several passes at a target, using their main guns, a flare, the MAGs and M16 rifles.In the distance, the lights of the Gaza fishing fleet are visible.They’re staying within the proscribed fishing range, but somewhere out there are other boats from Squadron 916 patrolling to make sure.The crew has empathy for the Gazan fishermen but is well aware of the potential threats.“Most of these Gazans just want to feed their family and sell fish; it’s the rare threat we watch for,” says Amir.