"You can lead a horse to water but you can't make it drink. We did a lot of leading to a lot of water, but people decided they weren't ready for one reason or another to move," Kerry stated. 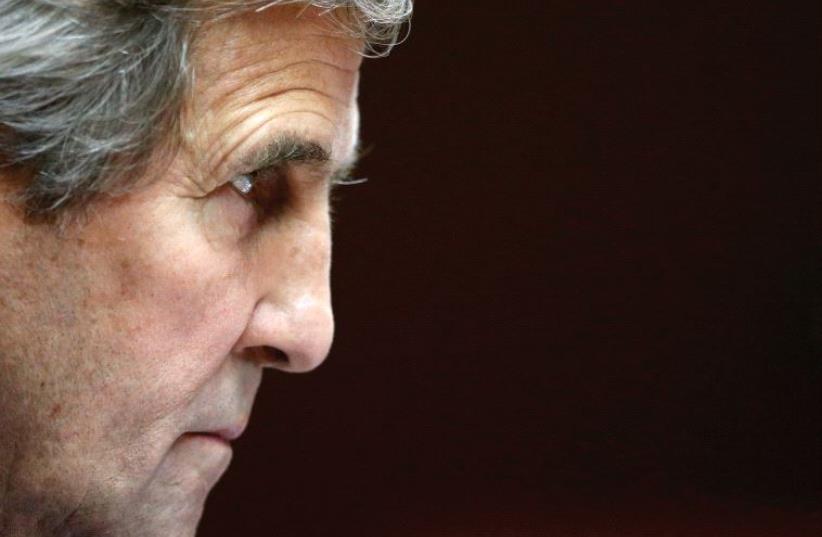 US SECRETARY of State John Kerry attends a bilateral meeting in China last month. (
(photo credit: REUTERS)
Advertisement
Outgoing US Secretary of State John Kerry rebuffed claims that the Obama administration has failed to resolve the conflict between the Palestinians and the Israelis, in a CNN interview with Christian Amanpour on Monday. When faced with a statement from Amanour  that "basically yet another administration" has not been successful in reaching peace in the conflict, Kerry replied with a stern "no.""When you say another administration has failed to do this, no, no. "
John Kerry lays out Mideast peace vision
He added, "the leaders of one country and one entity have failed to come to the table and reach agreement," Kerry said. Kerry was quick to correct himself when he began to say "two states" had failed to come to negotiations. During Kerry's tenure he traveled to mediate between Israeli and Palestinian leaders on numerous occasions in what's known as shuttle diplomacy, to no avail. "You can lead a horse to water but you can't make it drink. We did a lot of leading to a lot of water, but people decided they weren't ready for one reason or another to move," Kerry stated.Kerry defended the Obama administration's decision to abstain from anti-settlement UN resolution 2334 in late December by saying that "all we are trying to do is speak as a good good solid best friend of Israel."Amanpour responded by inquiring whether Kerry thought that Prime Minister Benjamin Netanyahu was "ungrateful," to which Kerry answered with a tame "no, I'm not characterizing it in anyway whatsoever."Kerry cautioned that Israel is marching down a road to becoming a "unitary state" that cannot be both a Jewish and democratic state. Kerry also wished luck to incoming senior advisor to the Trump administration, Jared Kushner, on working to resolve the conflict, adding that "you have to have a theory on how you're going to do that and what compromises are going to be made to do it." Kushner, 36, an Orthodox Jew who is the grandson of Holocaust survivors, has headed his family’s real estate business and is the publisher of The Observer, a New York newspaper covering real estate and finance. Although he has no experience in government or diplomacy, his father-in law, US President-elect Donald Trump, has said that Kushner “knows the region, knows the people, knows the players.”Kushner’s views on solving the Israeli-Palestinian conflict have not been made public, although he was said to have contributed to a speech Trump gave to the American Israel Public Affairs Committee in March 2016. In that speech, Trump vowed to move the US Embassy to Jerusalem, “the eternal capital of the Jewish people,” and said the Palestinians must accept as a given the closeness of the US-Israel relationship.Negotiations between Israel and the Palestinians have been moribund and figures on both sides have been pessimistic about their revival. Trump has offered no details on how he would approach Israeli-Palestinian peace, although he said he would like a crack at negotiating a deal. With his campaign’s approval, the Republican Party over the summer adopted a platform that for the first time since 2004 does not mention a two-state solution, deferring to Israel on what the parameters of peace negotiations should be.JTA contributed to this article.