Argentinian-born MK calls for Latin American countries to pressure Hamas in order to reach a long-term agreement that can bring security for Israel and economic growth in Gaza. 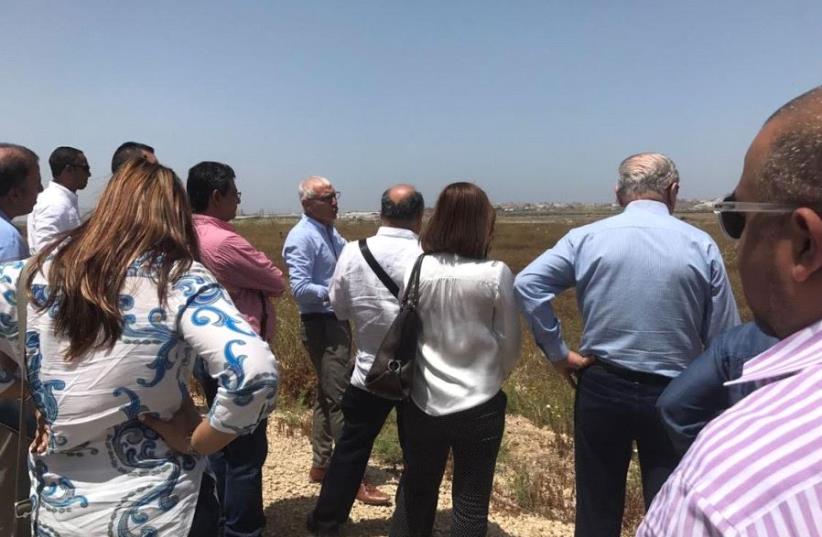 Lawmakers from Latin American see humanitarian aid pass into Gaza at the Kerem Shalom crossing, May 15, 2017
(photo credit: KNESSET SPOKESPERSON'S OFFICE)
Advertisement
A group of 20 senior lawmakers from Latin America visited the Kerem Shalom crossing into Gaza with MK Haim Jelin on Monday.The legislators were able to see humanitarian goods pass through the crossing to Gaza.Jelin (Yesh Atid), who used to be the head of the Eshkol Regional Council along the Gaza border, told the delegation: “Israel is in a conflict with Hamas, not the Gazans.”“We are responsible and committed to providing the [Gaza] Strip with what they want and buy from Israel and the world. We are working to rehabilitate the [Gaza] Strip, not to make the humanitarian situation worse,” he added.Jelin said Gazans must “choose between the darkness of the tunnels or the light of the economy.”The MK, who grew up in Argentina, called for Latin American countries to pressure Hamas in order to reach a long-term agreement that can bring security for Israel and economic growth in Gaza.The parliamentary representatives, committee heads and senators came from Argentina, the Dominican Republic, El Salvador, Guatemala, Mexico, Panama, Paraguay and Uruguay.The delegation also visited towns near the Gaza border and saw a tunnel that Hamas terrorists came through.On Tuesday, the group is expected to meet with Knesset Speaker Yuli Edelstein and visit the Armon Hanatziv lookout, where they are to hear an explanation of what they’ll see from Knesset Foreign Affairs and Defense Committee chairman Avi Dichter (Likud).They will also meet with MKs from the coalition and opposition, including MK Manuel Trajtenberg (Zionist Union), who hails from Argentina, to discuss possible interparliamentary initiatives.In addition, they will visit Acre, where MK Zouheir Bahloul (Zionist Union) will show them an organization he founded to promote Jewish-Arab coexistence.