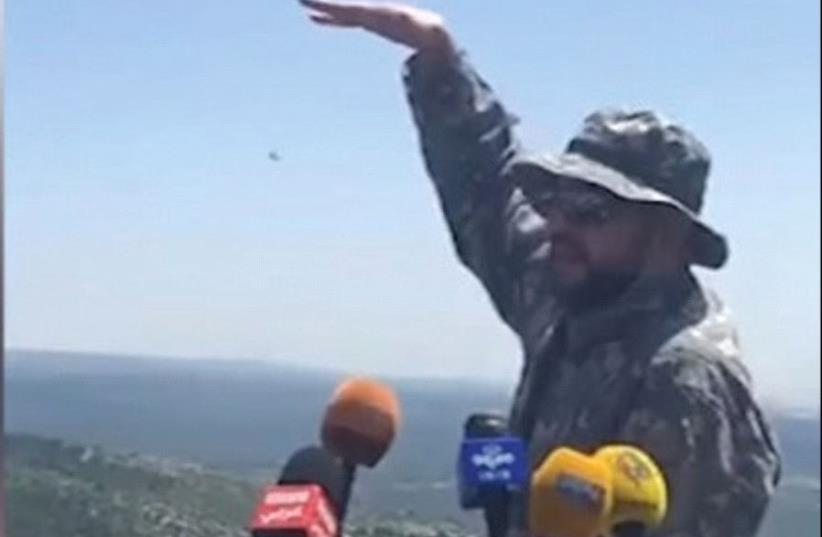 A HEZBOLLAH FIGHTER conducts a media tour of the Lebanese border with Israel yesterday
(photo credit: ARAB MEDIA)
Advertisement
A media tour of the Lebanon-Israel border organized by Hezbollah for journalists was a “strategic mistake,” Lebanese Forces leader Samir Geagea said on Thursday.Geagea was quoted by Lebanese media as slamming the group for giving the “impression that there is no official Lebanese Army that is responsible for the border and that there is no state. What is worse than all of this is that it gave the impression that UN Resolution 1701 has become something of the past.“At a time the region is boiling with events and at a time Israel is more and more showing hostile intentions,” Lebanon has an “urgent need” to remind itself of the UN Resolution and stress Lebanon’s commitment to it, Geagea said.“We need to prove that there is a state in Lebanon and that only the Lebanese Army is responsible for the border, in anticipation of any hostile operations against Lebanon that Israel might be thinking of.”Geagea called on the Lebanese government to “fully shoulder its responsibilities, especially in terms of the proper implementation of Resolution 1701, and to become properly in charge of strategic decisions” and rein in Hezbollah “to stop this type of behavior.”The tour near the southern Lebanese village of Ayta ash Shab featured a Hezbollah terrorist in combat fatigues who described in detail IDF positions along the border, as well as alleged locations of espionage systems.“We are now situated in the south of the village opposite Palestinian territory which the Zionist enemy occupied,” the terrorist told the journalists, adding that “around a year ago, the enemy built fortifications, sand barricades and massive defense measures to prevent any breach by infantry fighters.”According to Hezbollah’s Al-Manar, the tour leader told the journalists that the group has “special tactics to deal with these structures” and is “ready to carry out the secretary-general’s [Hassan Nasrallah’s] threats to the Zionist army, which for the first time in history has moved to a defensive position.”While the terrorist gave “detailed information” about IDF positions in the Galilee, according to a senior IDF official all the information that Hezbollah receives on Israel is through open sources, as it lacks any significant intelligence gathering capabilities.“We know Hezbollah very well, not like in 2006 when, had you asked me then what our intelligence on the group was like, I would have said that we had a problem,” he said, adding that while the Shia Lebanese terrorist group “understands that it is in their best interest to keep the borders quiet,” Hezbollah remains Israel’s top threat.“Israel has no patience for anything that will affect or hurt the security of the country and its citizens. They will pay a heavy price and they know it.”