The Daily Star claimed that the smoke bombs were thrown at protestors on the border. 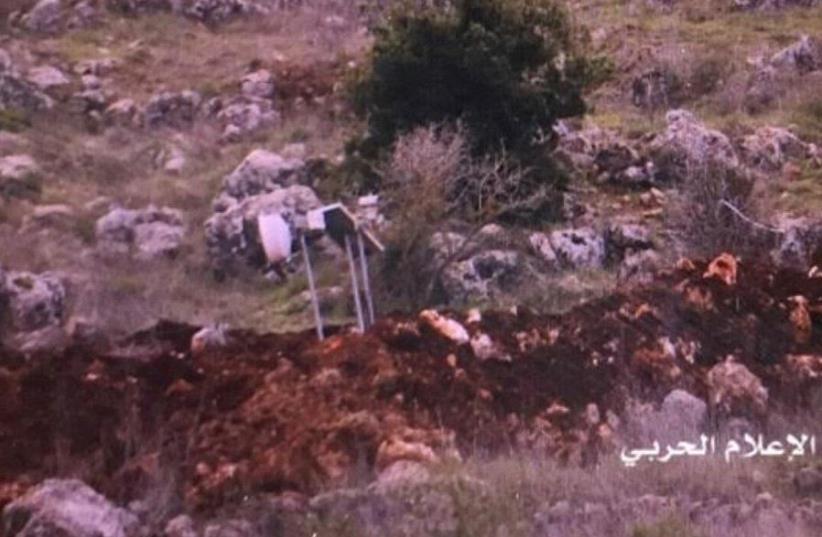 Hezbollah propoganda unit photo of alleged IDF spy gear planted in Lebanon
(photo credit: ARAB MEDIA)
Advertisement
IDF forces allegedly bombard Lebanon with five smoke bombs Saturday morning, Lebanese paper The Daily Star reported. The Daily Star claimed that the smoke bombs were thrown at protestors on the border. According to Channel 2, Lebanese protestors crossed the border into Israel and were dispersed with tear gas. According to the IDF spokesperson's office, only two Lebanese protestors were involved in the incident. The pair crossed the Blue Line into the UN demilitarized zone, and not into Israeli territory.Just last week Hezbollah denied reports that Israeli jets struck targets belonging to the group overnight and claimed that the IDF had planted spy devices in southern Lebanon.The Iranian-backed Shi’ite terrorist group said IDF soldiers crossed the Blue Line border in the early hours of the morning last Wednesday and installed tracking devices, including cameras and solar-powered transmitters, to spy on the group.“The Israeli enemy penetrated through the technological barrier surrounding the village of Meiss Ej Jabal, in the Qurum a-Shiqui region near the Blue Line, and planted spy gear in the area,” read a post on a Hezbollah-affiliated Twitter account, showing pictures of the alleged spy gear.Hezbollah has accused Israel of breaching the border demarcation to install espionage devices in Lebanese territory several times in the past year, most recently in January.Earlier Wednesday morning, Lebanese media reported that Israeli jets had carried out air strikes against a weapons shipment to Hezbollah near Damascus.According to Lebanese media, the targets that were hit around 3 a.m. were affiliated with the Assad regime and belonged to the Syrian Army’s Third Division in the al-Katif suburbs of the capital, and Syrian media had reported witnesses hearing “sounds of loud explosions” in the early morning hours.The report also claimed that the IDF struck from within Lebanon, circling the Bekaa Valley and Baalbek, so as not to be blocked by the Russian defense systems operating in the area.A few hours later Hezbollah issued a statement denying the reports of an Israeli air strike, saying any reports of strikes against the group in Syria were incorrect.