"In the next wars, the majority of weapons that will attack Israel will be Iranian products," says Maj.-Gen. Herzi Halevi. 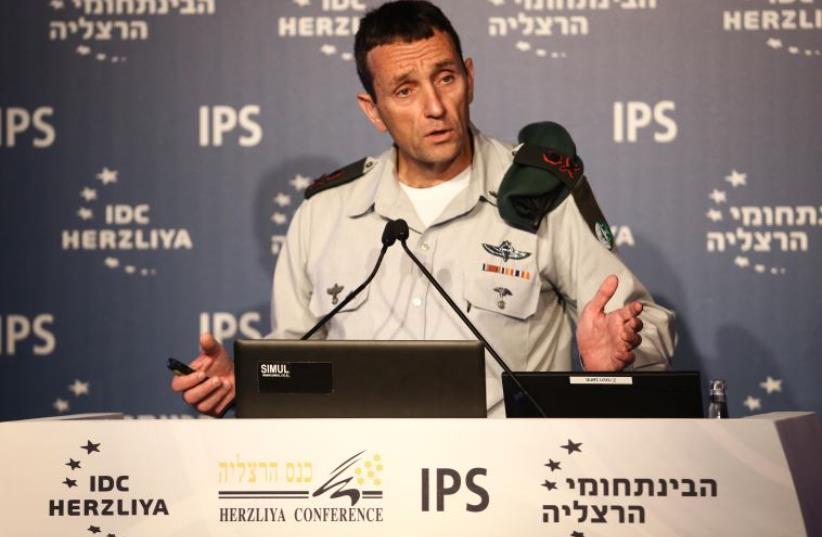 Military Intelligence, Maj.-Gen. Herzi Halevi speaking at 16th annual Herzliya Conference
(photo credit: ADI COHEN ZEDEK)
Advertisement
Lebanon will become a "state of refugees" from which it will be difficult to recover if there is another war between Israel and Hezbollah, a senior IDF intelligence general said Wednesday."The situation in the next conflict will be completely different. We are stronger than we have ever been and are able to deal with any threat," said the head of IDF Military Intelligence, Maj.-Gen. Herzi Halevi.  Speaking at the 16th Annual Herzliya Conference, Halevi stated that while Israel is not interested in another armed conflict with the Lebanese Shi'ite terror group, the Jewish state is "more prepared than ever" for such an event. "Never in history have we had an enemy that we know more about," he added. When addressing the question of how the next northern border conflict would look, Halevi replied: "The next conflict in the North will be different from Operation Protective Edge and also from past wars such as the Yom Kippur War." Turning to the topic of Iran, Halevi stated, "In the next wars, the majority of weapons that will attack Israel will be Iranian products." The military intelligence chief also said that "Iran is leading the way in cyber warfare and aiding Hezbollah on that front."He also addressed changes in strategic alliances in the Middle East between Israel and other moderate countries. "Part of the strategies of the pragmatic Sunni nations are becoming closer to our own," he said. "Saudi Arabia is not the same country we once saw just a year and a half ago, they have a new king and are leading the Sunni camp in the Middle East. Saudi Arabia is implementing vast reforms in order to move the country away from their oil dependent economy."Halevi, describing the purpose of intelligence, stated: "It is to describe the enemy, to tell the story and a slightly newer second purpose - to influence reality. The struggle between wars to restrain the building of power of the enemy is a type of influence that we greatly invest in and to a large degree we are very successful."Israeli and international policy-makers and analysts gathered for the 16th Annual Herzliya Conference, convened by the Interdisciplinary Center's Institute for Policy and Strategy in Herzliya. The three-day conference kicked off on Tuesday, the conference is focused on raising central issues and promoting public discourse on issues that affect Israel on both domestic and international fronts.