Liberman: Population swaps should be part of Israeli-Palestinian peace deal

“The principle of land for peace has failed,” Liberman said during a wide-ranging policy talk with students at Ariel University. 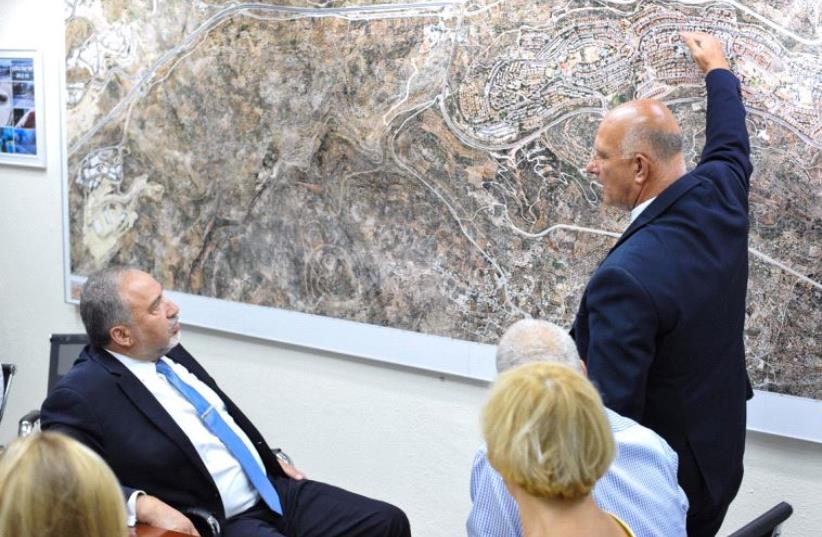 Avigdor Liberman discusses a map of Ariel with the city's mayor.
(photo credit: COURTESY ARIEL MUNICIPALITY)
Advertisement
Defense Minister Avigdor Liberman on Monday night called for a peace deal with the Palestinians that is based on population and land swaps. “The principle of land for peace has failed,” Liberman said during a wide-ranging policy talk with students at Ariel University. He promoted what has long been both his diplomatic plan and that of the Yisrael Beytenu party. It calls for the borders of the two-state solution to be drawn in such a way as to exclude the maximum amount of Palestinians and to include as many Israelis as possible. The best path forward, he said, “is an exchange of territories and population.”Such a plan would put the settlement blocs within Israel’s final borders, but exclude some Israeli-Arab areas of Israel.“Why should the Triangle and Umm al-Fahm be part of Israel?” Liberman asked. “Why should I subsidize [Islamic movement leader Raed] Salah and pay [MK] Hanin Zoabi [Joint List]?”However, he cautioned, such a solution to the Israeli-Palestinian conflict would have to be part and parcel of a larger comprehensive agreement with the Arab world.Legally, he said, there is precedence for this. When he was Foreign Minister, he said he had asked the office’s legal advisors for an opinion on the matter and had received an affirmative response in writing.They had explained that “it was possible according to international law,” Liberman said.“I don’t see any reason why they prime minister and the Likud don’t act according to this principle,” he said.Defense Minister Avigdor Liberman promised to stand by Staff Sgt. Elon Azaria even if it is proven that he erred in his actions. Azaria is accused of having shot and killed an already neutralized Palestinian terrorist as he lay on the ground.“We will stand by him even if he was wrong,” Liberman said. “We are obligated to give him all the help and the support that we can.”He spoke against those who rushed to judge Azaria, who is standing trial for manslaughter for his role in the death of Abdul Fatah al-Sharif, 24, after Sharif had just stabbed a soldier.“Journalists and politicians should remember that in a democratic country people are innocent until proven guilty,” Liberman said. “That’s particularly true when it comes to soldiers whom the state has sent on a mission, and who are then under pressure when facing terrorism and a threatening population. They could make a mistake.”Liberman noted that the soldiers in question were young men, age 18 and 19. Azaria, in particular, was condemned in the court of public opinion even before the legal trial began. The military justice system has to work without pressure or connection to any political opinion, he said.Liberman added his hope that the military court could dismiss publicity surrounding the case and deliver a verdict based on facts.Liberman reiterated his position on the pending demolition of the West Bank outpost Amona, which the High Court of Justice has mandated must be demolished by December 25.His ministry must abide by the court decision, Liberman said.Amona cannot remain in its current location because of the court ruling and because most of the structures are built on private Palestinian property, he said.Liberman said his policy is that the same law which applies to settlers in the West Bank with regard to illegal building also applies to Palestinians, such as ones built illegally in the village of Sussiya.The defense minister also spoke of the need to remove religion from politics, particularly when it comes to the allocation of resources.But this was not the same thing as a separation of religion and state, he said, something that was not possible given deep ties between Judaism and nationalism.He noted that the Finance Ministry has 17 building inspectors to monitor construction violations, and the Civil Administration has only 25 for Judea and Samaria. But when it comes to the regulation of the kosher food industry in Israel, there are 18,000 inspectors, he said.Liberman called for the abolition of religious councils, which he said should be replaced with religious service departments within Israel’s municipalities.This isn’t an anti-religious stance, he said, and described himself as someone who has Friday night dinner and then attends a football game on Saturday.