An online petition calling to cancel the annual 'Al Quds Day' rally in the British capital had garnered nearly 8.5 thousand signatures as of Wednesday. 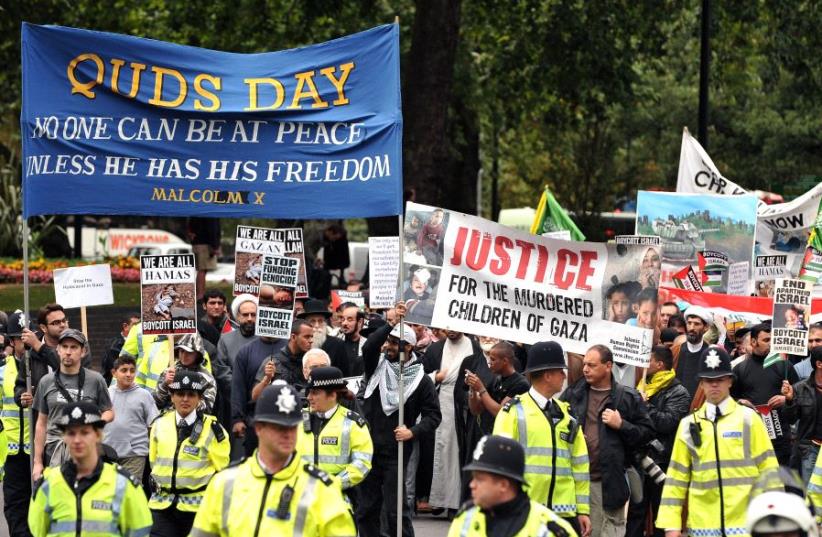 An Al Quds demonstration against Israel, marches through London on September 13, 2009
(photo credit: CARL DE SOUZA/AFP)
Advertisement
Thousands of advocates have called on London Mayor Sadiq Khan to cancel an upcoming anti-Israel rally in the British capital due to concerns that the march propagates displays of antisemitism and terrorism. The controversial event is scheduled to be held in the UK on Sunday as part of the annual 'Al Quds Day,' which Iran initiated in 1979 to express support for the Palestinians and opposition of Israel's existence and is held on the last Friday of the holy Muslim month of Ramadan.  As of Wednesday afternoon, an online petition entitled "BAN The Extremist, Terrorist Supporting Al Quds March In London On June 18th" had garnered nearly 8.5 thousand signatures.The petition was launched by the group North West Friends of Israel, a grassroots pro-Israel organization in Britain that works to counter antisemitism and the BDS movement."Previous Al Quds Day marches have seen displays of support for Hezbollah, an illegal, proscribed, antisemitic terrorist [organization]," reads the petition addressed to London's mayor. "This has caused great distress to the Jewish Community."The petition also pointed to the demonstration's participants in previous years brandishing flags and placards emblazoned with the symbols of the terrorist groups Hamas and Hezbollah. "After the terrible recent terrorist events in Manchester and London this display of extremism has no place on the streets of the UK," stated the petition. "Allowing this march to go ahead will send a worrying message to the UK's Jewish community and call into question the commitment of the Mayor of London to eradicate extremism and anti Semitism"The online appeal culminated by urging Khan to ban the 'Al Quds Day' march, and pointed to the London mayor's previous condemnations of terrorism in urging him to demonstrate "that your words are backed up by your actions."Sadiq Khan (Reuters)Khan, the first Muslim mayor of London, has said that he has endured "sleepless nights" following recent attacks in the British capital, including deadly attacks on the London Bridge on June 3 and one near Westminster in March. Hundreds of pro-Israel protesters are expected to participate in demonstrations this year to counter the 'Al Quds Day' rally organized by the Islamic Human Rights Commission. According to the UK-based Jewish Chronicle, mayoral spokesperson Sharon Vieira-Poole confirmed that Khan had discussed the march with local police. “They have to operate within the law and the protesters have a right to march, as long as they do so within the law,” the spokesperson said, adding that police have operational independence. The report also cited a municipal spokeswoman who said that the mayor has no power to stop a march as long as protesters act within the bounds the law.While Britain distinguishes between Hezbollah's political and militant arms and Hamas and its Izzadin al-Kassam Brigades, the Islamic Human Rights Commission guidelines to its supporters specify that flags of blacklisted organizations are prohibited, however "the political wing of Hizbullah is not a proscribed organisation."