Looking back with regrets

Jon Kyl has been overshadowed at times by Arizona’s other John, fellow pro-Israel senator McCain. But he will be remembered as one of the country’s best friends. 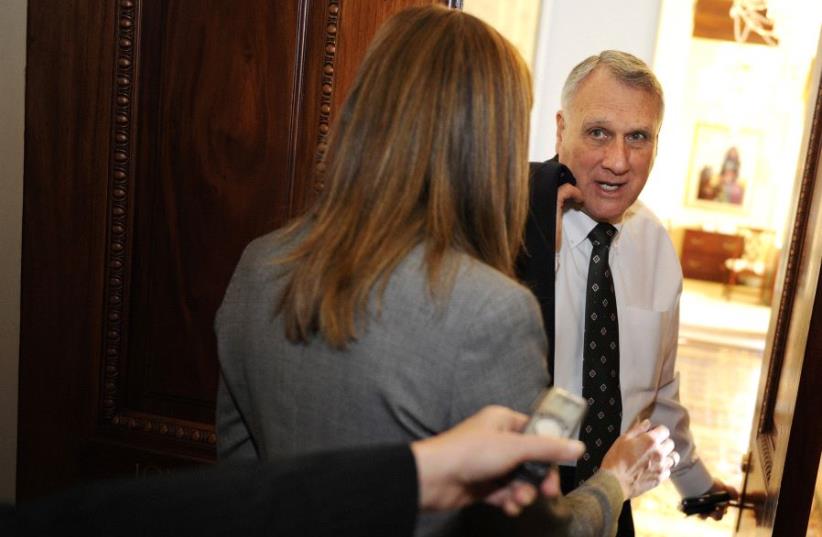 Senate Minority Whip Jon Kyl (R-AZ) talks to reporters as he walks to his office after meeting with Minority Leader Mitch McConnell (not pictured) at the U.S. Capitol in Washington, December 21, 2010
(photo credit: JONATHAN ERNST / REUTERS)
Advertisement
He has an impeccable record of supporting pro-Israel legislation, he is among the closest senators to Prime Minister Benjamin Netanyahu and he has announced that he will soon be retiring.Sounds like a description of Connecticut’s Joe Lieberman? Well, it could be. But it also describes Arizona Sen. Jon Kyl, who will be leaving Washington in 2013 after 26 years pushing many causes behind the scenes, including Israel’s security.Be the first to know - Join our Facebook page. Kyl is not known to Israelis as much as Lieberman and he has been overshadowed at times by Arizona’s other pro-Israel senator, John McCain. But he will be remembered by Israel advocates in Washington as one of the country’s best friends to ever serve in the Senate and House of Representatives.Most notably, Kyl authored the Jerusalem Embassy Act of 1995, which required the US to move its embassy to the capital and passed by a 93- 5 vote despite the objection of president Bill Clinton.Kyl now regrets being pressured to add a waiver that enables the president to delay moving the embassy from Tel Aviv.He was also instrumental in obtaining funding for the Arrow missile defense system and in passing legislation limiting the ability of countries to spy on Israel via satellite.Nowadays, as the Republican whip, the party’s No. 2 Senate leadership position, Kyl has been actively pressuring President Barack Obama to prevent the unilateral declaration of a Palestinian state and to condemn the regime of Syrian President Bashar Assad for killing its citizens.Kyl, 68, was born in Oakland, Nebraska. After a career as a lawyer, he was elected to the House in 1986 and the Senate in 1994. He was recognized by Time magazine in 2006 as one of the 10 best senators and in 2010 as one of the world’s 100 most influential people. In a February 10 press conference, he declared that he would retire at the official end of his current term on January 3, 2013.“Unlike many public officials, Sen. Kyl is modest about his accomplishments, especially as it relates to Israel,” said Young Israel of Phoenix president Farley Weiss, a top Israel advocate who has followed Kyl’s career for decades. “But I think he has been Israel’s best friend in the Senate, and he has contributed immeasurably to Israel’s security. Israel has known for 18 years that when there were tough times, Sen. Jon Kyl would always be there as someone they could count on to stand beside them. The reason why is because Sen. Kyl believes it was right to do and in America’s interest to do so.”In December 1996, Ehud Olmert flew to Phoenix to speak at a dinner Young Israel of Phoenix put together to thank Kyl for the Jerusalem Embassy Act. Olmert, then mayor of Jerusalem, told Kyl that for what he had already done for Israel, his name would be written in golden letters in Jewish history.How do you think Israel should respond to rocket and missile attacks from the Gaza Strip? Israel has to protect its citizens in every way it knows how. The problem is how to get support from the international community. Ordinarily that isn’t that important. But in the case of Israel, there is a lot that could be lost if the international community gangs up on it even more than it already has. That would be very troublesome.We’re working with Israel on its defenses against these kinds of missiles, which are a couple years away from operational. We have to be moving as quickly as we can to enable Israel to defend itself.On the political and defense fronts, Israel has to take appropriate action.Do you think President Barack Obama should present a diplomatic plan for Israel and the Palestinians? You can’t force any plan on the people of the region. That’s a naive and foolish proposition.What do you think about Prime Minister Benjamin Netanyahu outlining his peace plan in a speech to Congress?

Heard about it, not aware of it. That’s very different than US forcing. The US only has sway on one side in this conflict, so when the US talks about forcing people, it means forcing Israel, not forcing the Palestinians.What can the US do to the Palestinians?

Our influence is better directed to the things we say and the actions we take that portray the US position.If we portray our position as antithetical to settlements, for example, that supports the Palestinian narrative. If on the other hand, we recognize that the discussion about settlements is really not central to the the resolution of the dispute between Israel and the Palestinians, then it helps to set the stage for an honest discussion and also does not undercut Israel, so I think that’s the best way to influence the result and influence the Palestinians.It tells the Palestinians something that they don’t want to hear and they need to hear.How has Obama’s focus on settlements impacted the peace process?

I think it has set back potential progress by suggesting to the Palestinians that they have a valid grievance that will be backed up by the United States. That has probably made them more intransigent.I don’t know that for a fact but it can be surmised.There is an incredibly distressing effort at play to delegitimize Israel’s right to exist and to create legitimacy to create a Palestinian state recognized by the so-called international community apart from the negotiations with Israel. I am fearful that this is gaining momentum, that will be difficult if not impossible to turn around and will make a meaningful resolution of the dispute virtually impossible. The Palestinians have gotten a great deal of what they are seeking from Israel via the UN General Assembly. It’s hard to see how Israel negotiates from that position.Was it wise for Ehud Barak to announce in an interview with The Wall Street Journal that he would seek NIS 20 billion to deal with emerging regional threats? I am not in the business of advising, but if I were I would probably counsel against it. The question is about maintaining, not expanding, support for Israel. With the jury out about funding for Egypt, the issue of funding for Israel is somewhat compromised.A lot of people see it as a joint commitment from Camp David, and it’s unclear what the support for Egypt will continue to be.How do you recommend that America act to prevent the nuclearization of Iran?

We’d be in a much better position had we employed the right sanctions much earlier. We don’t know if employing more sanctions now will have the desired effect, but there is no other option. We have to do it in a way that coincides with the aspirations of the Iranian people, because they will suffer if the sanctions are effective and they need to believe that their suffering is a temporary condition to bring freedom to their country and get a representative government, rather than so the US will be able to reach a deal with a hated regime on nuclear weapons.The US hasn’t engaged in the right public diplomacy to achieve this. We need to maintain pressure on our friends and allies to employ the sanctions that are available and on our administration to do the same. The administration has a lot more authority than it has utilized.Why did you author the act requiring America to move its embassy to Jerusalem? I initiated the Jerusalem act because it was the right thing to do. It’s totally unacceptable that the United States of all countries would not have an embassy in the capital of one of our closest allies, because it offends some notion of political correctness.What I regret is that when we did this we were told that it couldn’t happen by “friends” of Israel in the Senate who insisted that they would be supportive as long as the the waiver was included.I should have tested them and seen if they would have voted against it without the waiver. In a spirit of reconciliation, I put in the waiver and the rest is history.There’s not much that can be done about it until the president and secretary of state are prepared to do what should be done. They will continue to invoke the waiver. There is never a good time for them. I talked to secretaries of state. I regret putting in the waiver. It almost would’ve been better to have lost and exposed people who say they were friends of Israel but said they wouldn’t support it without the waiver. We wouldn’t be any worse off, because we have a law on the books that was never enforced. I was a brand-new senator then. I let myself be talked into it and I’m not sure it was the right decision.What made you a leader on the Israel issue?

The Jewish community of Arizona is growing, but it’s still not substantial like New York.National security interests like missile defense are one of my key issues. Naturally, on US policy, one of the keys elements of that is policy on Israel. Even without communication with the Jewish community, I was led to that position. However interacting with leaders of the Jewish community here and in Israel have certainly expanded my understanding of the issues and made me a better advocate.How did you pass the bill that prevented satellites photographing Israel in high resolution?

I was in the House at the time. I was very concerned about new technology that was about to go commercial that had the ability to take photos at great resolution. I worked with the industry and people in the administration to determine what the policy would be. I saw that it was not possible to limit availability of such photography except in certain instances, and I homed in on those instances, which led to the agreement you noted. It was the most that we could do, and it turned out to be pretty helpful.Is it true that you and Netanyahu are close?

I would like to think we have a close relationship. I admire him very much.What are your parting words to the people of Israel? They need to maintain spirit, their hope and their strength. I see some very difficult times for Israel ahead. I’m really disturbed by this latest effort to get unilateral recognition for a Palestinian state and delegitimize Israel. Israel can withstand a lot of pressure, but as feckless as the so-called international community is, it can still do great damage contrary to your cause if it is galvanized sufficiently.US policy should be much more aggressive to prevent that from happening.