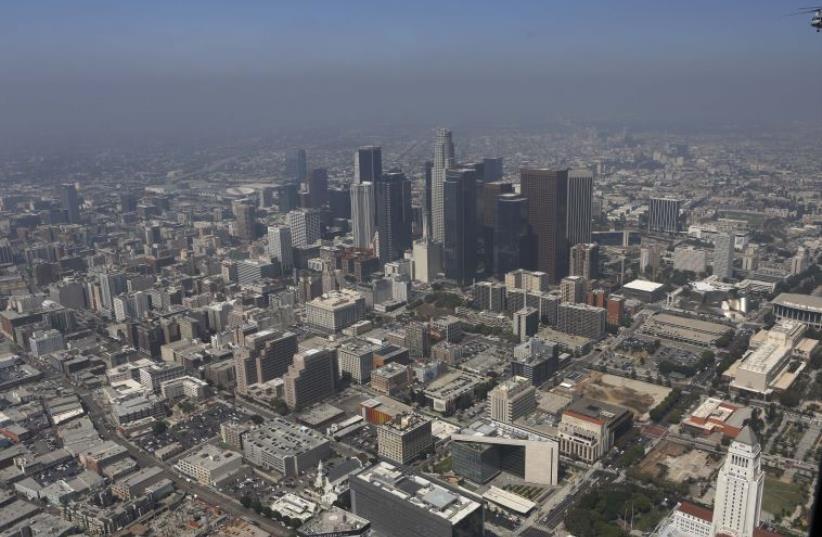 Los Angeles
(photo credit: REUTERS)
Advertisement
LOS ANGELES - Los Angeles shut more than 1,000 public schools on Tuesday over a threatened attack with bombs and assault rifles, sending hundreds of thousands of students home as city leaders were criticized for overreacting to what authorities later said was apparently a hoax.The emailed threat, which authorities said was routed through Germany but likely originated locally, was made nearly two weeks after a married couple inspired by Islamic State killed 14 people and wounded 22 others at a county office building 60 miles (100 km) away in San Bernardino."Based on past circumstance, I could not take the chance," Los Angeles School Superintendent Ramon Cortines told a news conference early in the day.But federal officials, who asked not to be identified, echoed an assessment by New York City Police Commissioner William Bratton that the decision in Los Angeles was an "overreaction." New York had received an almost identical threat that was quickly deemed not credible.After more than 1,500 school district sites had been inspected by nightfall, Los Angeles Mayor Eric Garcetti conceded that the message appeared to have been a hoax."We can now announce the FBI has determined that this is not a credible threat," Garcetti said, adding that the incident required further investigation but "what we do know is, it will be safe for our children return to school tomorrow.Despite that determination, Garcetti and Police Chief Charlie Beck stood by the decision to close the schools. They said New York officials had more time to assess the threat, which was sent to both districts from the same IP address.

PARENTS FRUSTRATED, CONFUSEDBut the unprecedented move at the second-largest public school system in the United States left some 643,000 students and their parents confused and frustrated.City Councilman Joe Buscaino, who has two children in LAUSD schools, complained about the lack of a timely district-wide emergency alert system, pointing out that many students learned of the closures from their friends via social media."I disagree with closing the schools because we're just showing these people that we're scared of them," said Marisol Hadadi, whose son attends Marquez Elementary School in Pacific Palisades.Ronna Bronstein, who has two sons in grade school, said she was trying to find out more while shielding her younger child from the news."I don't want him to be frightened to go back to school tomorrow," she said.A 17-year-old boy was walking to his charter high school when he was struck and killed by a truck at 7:31 a.m., officials said, minutes after LAUSD said classes would be canceled for the day.A law enforcement source told Reuters that Los Angeles authorities ordered the closure to allow a full search of public school facilities without consulting with the Federal Bureau of Investigation, which typically takes the lead on investigations into potential terrorism.New York's Bratton, a former Los Angeles police chief, said: "To disrupt the daily schedules of half a million school children, their parents, day care, buses based on an anonymous email, without consultation, if in fact, consultation did not occur with law enforcement authorities, I think it was a significant overreaction."Mayor Garcetti denied that assertion, saying his city had contacted federal law enforcement officials.

'32 JIHADIST FRIENDS'Congressman Brad Sherman, a Democrat from California, told the New York Times that the writer of the email threat claimed to be a devout Muslim prepared to launch an attack using bombs, nerve gas and rifles with "32 jihadist friends" because he had been bullied at a Los Angeles high school.Sherman told the paper that the number of attackers and claim to have nerve gas cast doubts on the credibility of the email, as did its author consistently failing to capitalize the word "Allah.""While we continue to gather information about the threat made against the Los Angeles and New York School Departments, the preliminary assessment is that it was a hoax or something designed to disrupt school districts in large cities," Representative Adam Schiff, the top Democrat on the US House of Representatives intelligence committee, said in a statement.Cortines, who is expected to retire at the end of 2015, said the threat stood out from most the district received in its seriousness and scope, referencing multiple campuses and mentioning backpacks and other packages."I have been around long enough to know that usually what people think in the first few hours is not what plays out in later hours," said the mayor, Garcetti. "But decisions have to be made in a matter of minutes."Police Chief Beck said it was "irresponsible" to criticize the decision in the aftermath of the Dec. 2 attack in San Bernardino.That massacre and other mass shootings have pushed the issues of militant Islamism and gun violence to the forefront of the U.S. presidential campaign.In addition to Los Angeles, the district serves all or parts of 31 smaller towns and cities as well as several unincorporated parts of Southern California.