Israeli officials feared that the 8 tons of ammonium nitrate was a cache meant for numerous future attack against Israeli and Jewish targets. 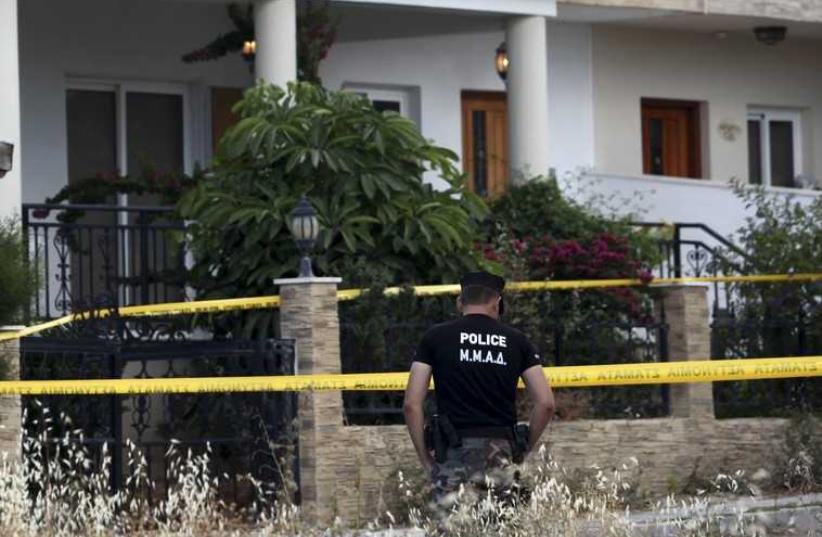 A policeman stands guard at a house where police discovered almost two tonnes of ammonium nitrate, in Larnaca, Cyprus, May 29
(photo credit: REUTERS)
Advertisement
NICOSIA - Cyprus jailed a member of the armed wing of Hezbollah for six years on Monday after he pleaded guilty to charges of stockpiling explosives to attack Jewish targets abroad.Hussein Bassam Abdallah, 26, who has dual Canadian and Lebanese nationality, was arrested in late May after Cypriot authorities found 8.2 tons of ammonium nitrate fertilizer, a potential explosive, in the basement of a house in the coastal city of Larnaca.Abdallah pleaded guilty to charges of possessing explosives, conspiracy to commit a crime, aiding and abetting a terrorist organization and participation in a terrorist group, the state Cyprus News Agency (CNA) reported.Authorities believe that the ammonium nitrate had been stockpiled in Cyprus since around 2011 and held in the basement of a home in a residential neighborhood of Larnaca.In a statement to police, Abdallah said the fertilizer would have been used to attack Jewish or Israeli interests in Cyprus, CNA reported.ISRAELI TOURISTSCyprus authorities have not speculated about the probable use or target, but the island is popular with Israeli tourists arriving by ferry and there is a synagogue in Larnaca.Abdallah regularly traveled to Cyprus to check on the ammonium nitrate. His latest instructions before his arrest on May 27 were to find a warehouse to store it, and his handler gave him a forged British passport, state prosecutor Polina Eftyvoulou told Cyprus's criminal court.Fertilizer-based bombs remain the explosive of choice for many militant groups across the world and have been used in some of the most destructive attacks in recent years.They were used in the 2002 Bali bombings which killed 202 and a year later in attacks on the HSBC bank headquarters and the British Consulate in Istanbul in which 32 people died."One kilo of this mixed with fuel can produce the equivalent of 0.82 kilos of TNT," Eftyvoulou was quoted as saying.