In the aftermath recent terror attacks, Prime Minister Benjamin Netanyahu and Liberman ordered the advancement of plans for 560 new homes in the West Bank settlement of Ariel. 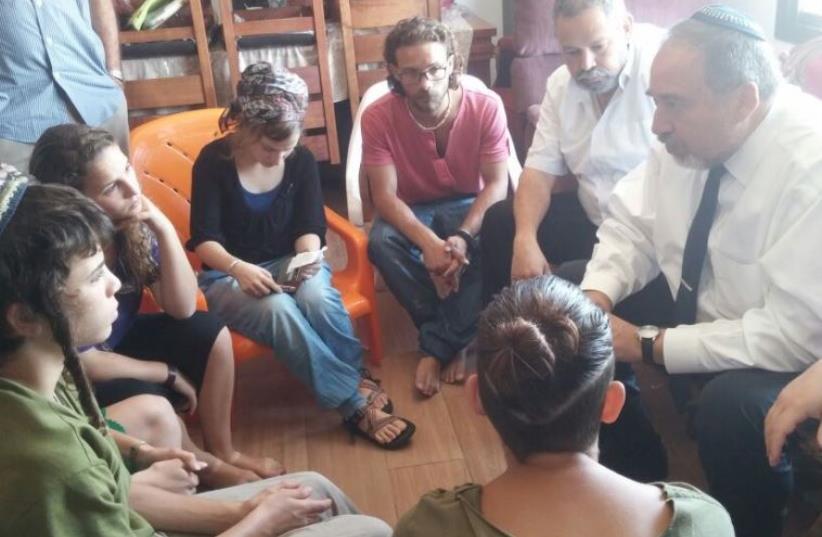 Defense Minister Avigdor Liberman meets with the Mark family children
(photo credit: HAR HEVRON SPOKESMAN)
Advertisement
The children of terrorist victim Rabbi Michael "Miki" Mark urged Defense Minister Avigdor Liberman to build a settlement near the spot on Route 60 in the Souther Hebron Hills where their father was killed on Friday."The response [to the attack] can't be more security or just a number of new homes. The response must be the creation of additional settlements, as a message to the terrorists that this is our home," Miriam Mark said."We will not move from here," she added.She spoke while Liberman paid a condolence call to their homes in the South Hebron Hills settlement of Otniel.The Mark family, with its 10 children, lives just up the street from the home of Dafna Meir, who was stabbed to death in January when a Palestinian terrorist infiltrated the settlement and entered her home.According to a spokesman for the South Hebron Hills Regional Council, Liberman promised the family, "I have no intention of remaining passive. We will build and we will take care of security." He added that "the issue is not just with defense. We have to take off the head of the snake." Family members thanked the soldiers for their work in combating terrorism.South Hebron Hills Regional Council head Yohai Damri said that the IDF needs to do more to secure the area . He added that he is particularly concerned with incitement in area mosques against Jews."Every Friday there are calls to 'slaughter the Jews,'" Damri said.Separately, on Wednesday, tenders were published for 42 homes in the West Bank settlement of Kiryat Arba.The announcement comes in the wake of a terrorist attack last Thursday, in which Muhammad Tarayrah, 17, infiltrated the settlement and stabbed to death Hallel Yaffa Ariel, 13, as she slept in her bedroom at home.In the aftermath of both attacks, Prime Minister Benjamin Netanyahu and Liberman ordered the advancement of plans for 560 homes in the West Bank settlement of Ariel. Netanyahu is also believed to have approved 240 new units in the southeastern and northern Jerusalem neighborhoods of Har Homa and Ramot.