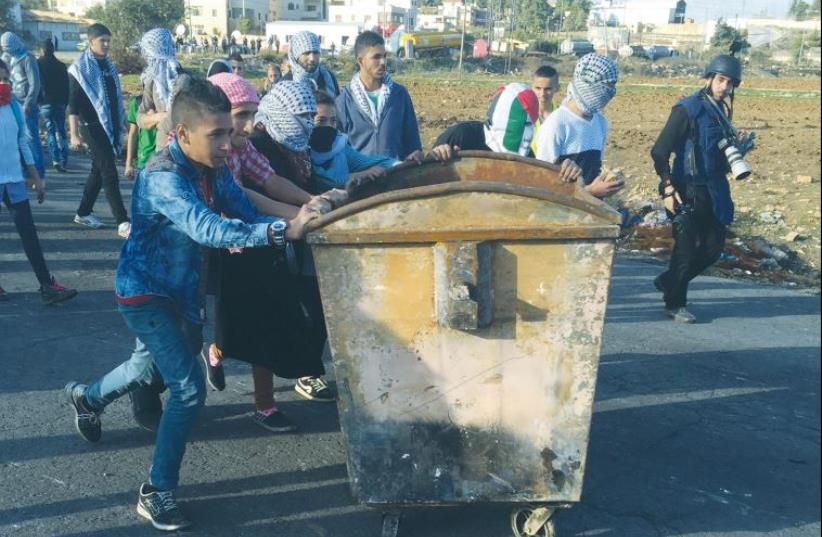 PALESTINIAN PROTESTERS push a dumpster toward the DCO checkpoint near Ramallah
(photo credit: SETH J. FRANTZMAN)
Advertisement
Minors under 14 who commit nationalistically-motivated crimes may receive prison sentences, if a bill authorized by the Ministerial Committee for Legislation on Sunday becomes law.The proposal by MK Anat Berko (Likud) differentiates between acts of terrorism – defined as crimes motivated by nationalism – and other crimes, for which minors under 14 cannot receive prison sentences.The bill states that those under the age of 14 who commit terrorist acts will be kept in a children’s home until they turn 14, at which point they can be sent to prison.Earlier this month, 12 and 13-year-old Palestinian cousins stabbed a Jerusalem Light Rail security guard in the capital’s Pisgat Ze’ev neighborhood.Berko said she plans to expedite the bill’s passage into law because it could save lives.“As long as the Palestinians recruit minors while knowing that the Israeli law does not have a real response to minor terrorists under age 14, we can only expect the phenomenon to spread, with the thought that, anyway, Israeli law enforcement will send the minors back home after they commit the acts,” Berko stated.The Ministerial Committee for Legislation also conditionally approved a bill by MK Robert Ilatov (Yisrael Beytenu) that is the latest of several iterations of legislation meant to limit donations organizations can receive from foreign governments or entities funded by foreign governments.According to Ilatov’s proposal, funding from a foreign country would not be exempt from income tax and any corporation, organization or person that is funded by a foreign country may be considered a foreign agent.Foreign agents would be required to report which countries fund them and what activities the aid is meant for. They would be obligated to publicize that they are foreign agents on any websites, signs or advertisements they release. The fine for not doing so would be NIS 29,200.The ministers approved the bill, but it will not go to a preliminary Knesset vote until a similar bill by Justice Minister Ayelet Shaked moves to the legislature.Shaked’s “transparency bill” would require NGOs who receive most of their funding from foreign governments to declare that they do so in their publicly available publications and reports, in any contact in writing, and at meetings with public officials or workers. They will also have to detail which foreign entities donated to them during the relevant years.In addition, the NGOs’ representatives will be required to wear name tags listing the name of their organization when present in the Knesset, as lobbyists do. Any violation of the law will carry a fine of NIS 29,200.“The blatant intervention of foreign countries in the State of Israel’s internal matters through funding is an unprecedented, broadly-occurring phenomenon that violates all the rules and norms of relations between democratic countries,” Shaked said earlier this month.