Goldin and Shaul families come out against deal; Shauls to set up protest tent outside Prime Minister's Residence. 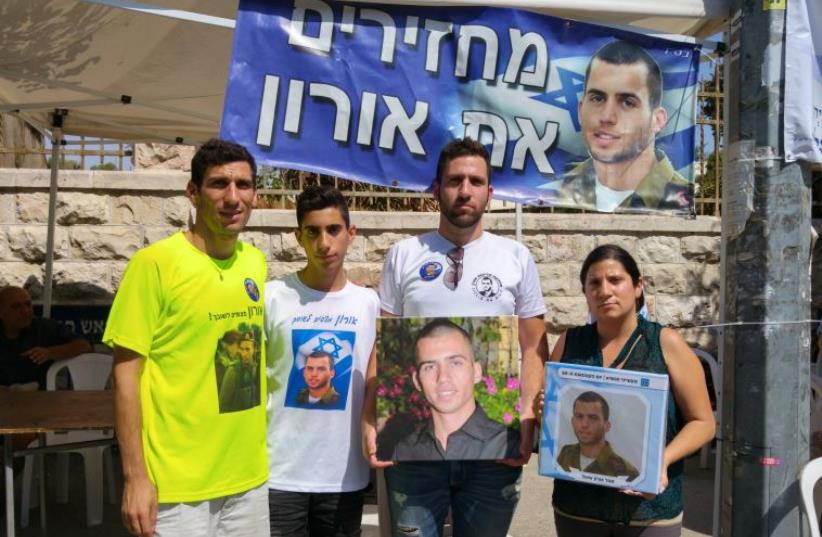 Family members of abducted soldier Oron Shaul demand his return in front of the Prime Minister’s Residence on Sunday
(photo credit: DANIEL K. EISENBUD)
Advertisement
The family of Lt. Hadar Goldin, the IDF soldier killed during Operation Protective Edge in Gaza whose body was never returned, came out against a pending reconciliation deal with Turkey that does not include the return of their son's remains."We view gravely the pending agreement between Israel and Turkey, which is the leader of the Muslim Brotherhood and the state that serves as Hamas's patron," the family said in a statement on Saturday evening.The announcement was released after the family of St.-Sgt. Oron Shaul, who like Goldin was killed in Gaza and not returned to his family for burial in Israel, said that it would raise a protest tent outside of the Prime Minister's Residence in Jerusalem on Sunday."The agreement does not include the return of our sons, Hadar and Oron, to Israel, contrary to stated promises from the prime minister made over the last two years," the Goldins' statement added."As we understand it, by signing the agreement the prime minister will have failed the first meaningful test after Operation Protective Edge, and will grant a prize to Hamas for kidnapping Lt. Hadar Goldin and St.-Sgt. Oron Shaul," the family charged."The time has come for Israel to be the one who sets the price for Hamas on kidnapping and holding soldiers, and not as we have gotten used to over the last 30 years - to pay heavy prices to our enemies."St.-Sgt. Shaul's parents, Zahava and Herzl, told reporters Saturday that the purpose of the protest tent they plan to put up outside the Prime Minister's Residence is to pressure cabinet ministers from signing any Israeli-Turkish agreement without a condition that Hamas return the bodies of Israeli soldiers in Gaza, as Turkey has diplomatic relations with Hamas."It is unfathomable that we give the Turks achievements and answer their demands while our children are still being held in Gaza." Oron's parents said.The security cabinet is scheduled to meet on Wednesday to approve a rapprochement agreement with Turkey that is expected to be finalized on Sunday. Earlier this week, the family of Avraham "Abera" Mengistu, who has been held in Gaza since 2014, also came out against the deal with Turkey.The Prime Minister's Office on Saturday responded to the criticism from the families, saying "Israel is constantly working, through open and secret channels, to bring back home the two IDF soldiers and two Israeli citizens being held in Gaza," in reference to Goldin, Shaul, Mengistu and a Beduin citizen whose name has not been released."Israel will not cease these activities until the mission is accomplished," the statement added.