India sees its ties with Israel and the Palestinians as “exclusive and independent” of each other. 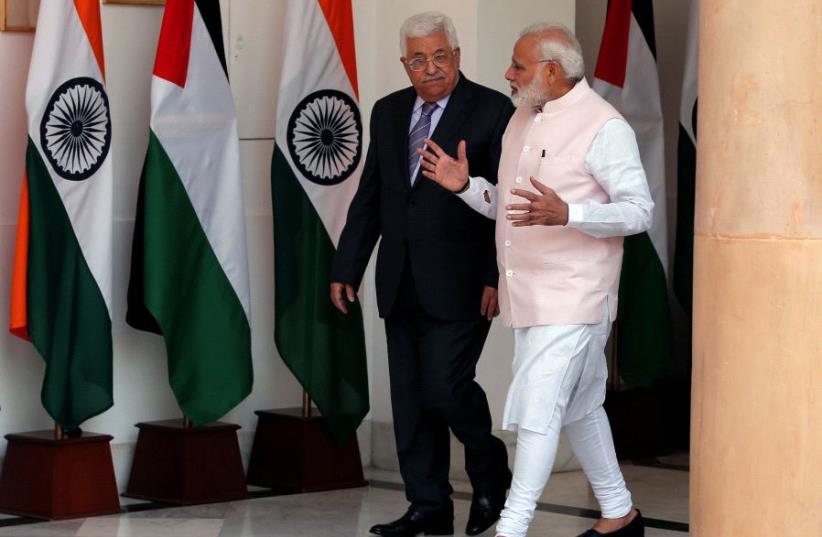 Palestinian Authority President Mahmoud Abbas (L) and India's Prime Minister Narendra Modi arrive for a photo opportunity, ahead of their meeting at Hyderabad House in New Delhi, India May 16, 2017
(photo credit: REUTERS)
Advertisement
Indian Prime Minister Narendra Modi is scheduled to arrive in Ramallah on Saturday and become the first Indian prime minister to visit the West Bank.Modi is not scheduled during this visit to travel to Israel, which he toured for three days in July.B. Bala Bhaskar, a joint secretary in the Indian Ministry of External Affairs, told reporters earlier this week that Modi’s decision to exclusively visit Ramallah is a part of his country’s “de-hyphenation policy.”According to Bhaskar, India sees its ties with Israel and the Palestinians as “exclusive and independent” of each other.Modi will fly by helicopter on Saturday morning from Jordan to the Palestinian Authority’s presidential headquarters in Ramallah, according to a PA security official.“He will not pass through any Israeli checkpoints on his way to Palestine, but we are coordinating his flight with Jordan and Israel,” the official said in a phone conversation.Upon Modi’s arrival in the de facto Palestinian capital, he will lay a wreath on the tomb of former PLO chairman and PA president Yasser Arafat, an official in President Mahmoud Abbas’s office said by phone.The Indian prime minister will then spend 20 minutes touring the 15-month-old Yasser Arafat Museum, which chronicles the life of the former PA president, the official said.According to Muhammad Halayka, the director of the Arafat Museum, Modi will be the first prime minister to visit the site.Following his tour of the museum, Modi and Abbas will meet, sign bilateral agreements, hold a joint press conference and share lunch, the official added.A senior Palestinian official, speaking on condition of anonymity, told The Jerusalem Post that Abbas will ask India to play a role in a multilateral peace process between Israel and the Palestinians.“India is a major and important country,” the official said. “It is one of the BRICS countries [an association of five major emerging national economies: Brazil, Russia, India, China and South Africa]. So the president will ask India to undertake a role in a multilateral peace process.”Since US President Donald Trump recognized Jerusalem as Israel’s capital and initiated the relocation of the US Embassy in Tel Aviv to the city, Abbas has said the Palestinians would no longer participate in an American-dominated peace process, and called for the establishment of a multilateral peace process to replace it.Abbas has called on the UN and European, Arab, African and other countries to participate in such a peace process. Israel has said it will only work with a US-led peace process.Ahmad Majdalani, a PLO Executive Committee member, said that improved relations between Israel and India could benefit the Palestinians.“The growing ties between them could be positive, because now India has more leverage with Israel and can pressure it in our favor,” he said.Over the past several months, Israel and India have upgraded ties, with their respective leaders visiting each other’s countries and inking cooperation agreements.The senior PLO official stated further that Abbas and Modi will discuss bilateral relations between India and the PA, especially regarding information technology.India has donated millions of dollars for a technology park that is under construction in Bir Zeit, a university town north of Ramallah.The technology park will host a co-working space, a research and development program, an innovation center, a business center and other facilities, according to the park’s website.On Wednesday, Abbas’s office issued a statement welcoming Modi’s upcoming visit, which it called “important” and “historic.”Modi is also scheduled to visit Jordan, the United Arab Emirates and Oman over the coming several days.