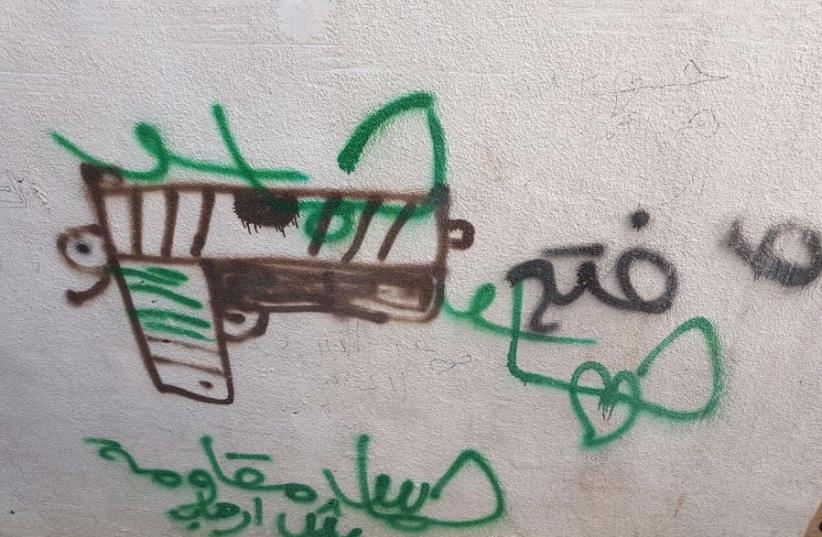 An image of the graffiti praising the terrorist in Sunday’s attack.
(photo credit: POLICE SPOKESPERSON'S UNIT)
Advertisement
On Tuesday, two days after the capital’s mass-casualty truck-ramming attack, police arrested more than a dozen suspects accused of aiding the terrorist, rioting in his east Jerusalem neighborhood, and spray painting graffiti in the Old City praising the murders.On Monday, police arrested nine suspects in the volatile community of Jebl Mukaber, including five of the killer’s family members, said police spokesman Micky Rosenfeld on Tuesday.“After the initial attack on Sunday, police entered the terrorist’s neighborhood, where family members and other possible accomplices connected to the attack were arrested,” said Rosenfeld.“Special patrol units in the Jebl Mukaber neighborhood also prevented the set-up of a mourning area for the terrorist on a rooftop of a house.”Police operations continued on Monday in the Arab enclave, known for being a breeding ground for terrorists, when a mob of residents rioted, throwing firebombs and rocks at officers in the area.“The Border Police responded with non-lethal weapons and secured the scene,” he said. “None of the officers were injured and three suspects were arrested, who have been arraigned at the Jerusalem Magistrate’s Court.On Tuesday, Rosenfeld said four more men were arrested in the Old City’s Muslim Quarter for spray painting graffiti on walls lauding Sunday’s mass murderer as a hero and “martyr.”“CCTV surveillance cameras in the area recorded the vandalism, and police were able to identify and locate all the suspects involved,” said Rosenfeld.Following Sunday’s attack, which killed four soldiers and wounded 17 others, Rosenfeld said a checkpoint was erected at one of Jebl Mukaber’s entrances.“Hundreds of extra officers have been deployed to patrol the rest of the neighborhood, where they are checking all vehicles, including trucks, to prevent further attacks,” he said, noting that the investigation into the attack is ongoing.“Security measures will continue as long as necessary to find potential suspects and vehicles that may be used in another attack.”