Rabbi Nehemia Lavi, 41, and Aharon Benita, 22, were both laid to rest on Sunday afternoon at the Har Menuchot cemetery in the capital. 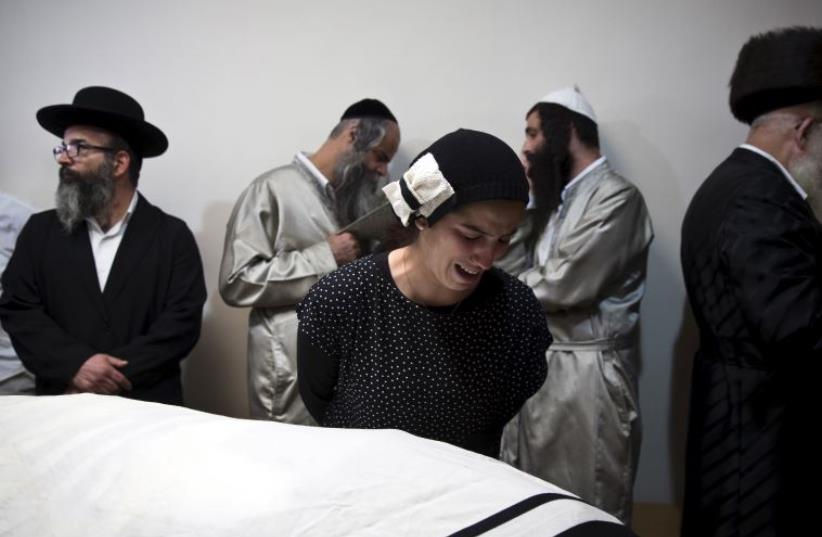 A relative of Aharon Banita mourns next to his covered body before his funeral in Jerusalem
(photo credit: REUTERS)
Advertisement
Rabbi Nehemia Lavi, 41, and Aharon Benita, 22, who were murdered in the terrorist attack in the Old City of Jerusalem on Saturday night, were both laid to rest on Sunday afternoon at the Har Menuchot cemetery in the capital. The funeral of Aharon Benita, a hassidic man from the haredi settlement of Beitar Illit, was attended by hundreds of mourners, including Chief Rabbi David Lau, Chief Rabbi of Jerusalem Rabbi Aryeh Stern and Mayor of Jerusalem Nir Barkat were also present.Benita had been a private in the IDF’s Shahar program for haredi soldiers and members of his unit and the military rabbinate were also present at the funeral, which had originally been scheduled to take place in the military cemetery at Mount Herzl but was moved to Har Menuchot in accordance with the wishes of his family. The army posthumously promoted him to corporal. Benita’s family also originally requested that the media not cover the funeral although this was later retracted, but the symbols of the state were mostly lacking as requested by the family, and only Lau, Stern and Rabbi Mordechai Halperin from Beitar Illit spoke. The funeral ceremony was kept short since Jewish law stipulates that mourning not be carried out in the intermediary days of Succot or Passover. Lau said that Benita would have been welcomed into the gates of Heaven and that he died as a Jewish martyr. “A Jew walks to pray during the holiday and this is what happens,” said Lau. “The whole of the Jewish people must wake up. He was killed in a sanctification of Gods name. We believe that everything God does is for the good, but we do not know the accounts of Heaven.”Miriam Gal, the mother of Benita’s wife Adel, spoke at the funeral to Lau about what her daughter had told her of the incident. “My daughter tried to run away with a knife in her neck. She tried to escape but they [Palestinians at the scene] wouldn’t let her and shouted at her “hopefully you’ll die too,” recalled Gal who was inconsolable with grief. “Such cruelty. The Jewish people should not be foolish, wake up. This [the Palestinians] is a nation of murderers. There entire essence is blood, blood, blood, Jewish blood. They have nothing else. Anyone who speaks of peace is an idiot, there is no other word,” she cried. Gal spoke about Aharon and Adel, saying that they were inseparable. “They were never apart, they talked together the whole time, He promised her that he would make this the happiest Succot of her life, that’s what he said. What promises.” Gal recalled. “He is lost and will never return to us,” she said of Benita. “Aharon was the best son-in-law in the world, he was such a good boy,” she said breaking down in tears again. “I loved him so much.”Lavie, who was an IDF reserve officer and leaves behind his wife and seven children, was killed as he came to the assistance of Bennett and his family, who were the initial subject of the attack by Mohammad Halabi, a 19-year-old Palestinian law student at Al-Quds University from a village near Ramallah.Thousands of mourners came to his funeral at the Har Menuchot cemetery along with President Reuven Rivlin, Mayor of Jerusalem Nir Barkat, and head of the opposition Isaac Herzog. “You loved everyone and everyone loved you,” said Lavi’s father Yehezkel in his eulogy. “You took advantage of every moment to learn and to teach, and every thing you did was done kindly, happily and pleasantly. God decided to take your beloved and holy soul unto him and to place you on the seat of the righteous.”And for the second time in one week, the president delivered a eulogy to a fallen terror victim, praising Lavi for his courage in going to the aid of Bennett and his family. “You were slain, and died for your people, for your nation, for your country, for your homeland. You fell while keeping guard over us. “The responsibility you took, your shared concern, your dedication to the well-being of others, lit your way as a student of the Torah, as a teacher, as a rabbi, as a soldier, and as a father. In your dedication to others, and you limitless sacrifice, out of the love for Israel that beat within your heart, you left a will and testament of love and sacrifice for your children.”Rivlin urged determination in the struggle against terrorism, and called on Jews to continue to come to the Old City. “We must keep on walking on the same stones that Rabbi Nehemiah and Aaron walked along, and prove through our actions that terrorism will fail to harm our way of life,” he said.