Both men, Nasrallah and Netanyahu, have great survival instincts, and both have no interest in ratcheting up the conflict to a point where it could spiral out of control and topple them both. 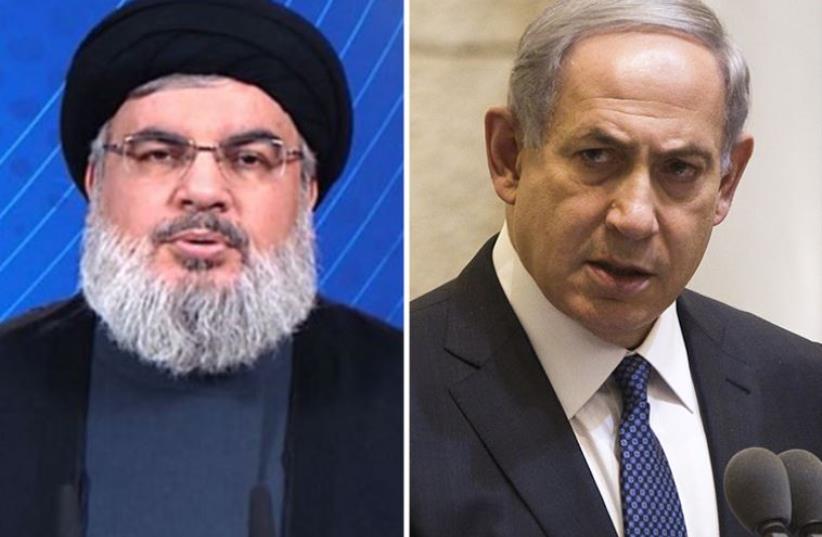 Netanyahu and Nasrallah
(photo credit: AFP PHOTO,REUTERS)
Advertisement
The year is 2019, not 2006; the Israeli prime minister is Benjamin Netanyahu, not Ehud Olmert; and Hezbollah leader Hassan Nasrallah is no longer the same Hassan Nasrallah.And that explains why Sunday’s tension along the border ended in a skirmish, without casualties on the Israeli side, rather than a 34-day Second Lebanon War, as was the case in the summer of 2006 – the last time tensions along the northern border ran so high.
IDF smokescreen and decoy helps contain Hezbollah attack
Neither Netanyahu nor Nasrallah have any interest in a war right now. Nasrallah because he wants to survive, and knows that to trigger a war with Israel would bring upon Lebanon a degree of devastation not seen before. That message has been passed on repeatedly over the last months and years.And Netanyahu because he is naturally reticent about launching a war. The last thing he needs two weeks before Election Day is a major military conflagration in the North. Netanyahu knows well that it is easy to launch a war, and that in the beginning there is usually a great deal of public support for such a move, but that this support sours the minute Israeli casualties begin to mount.This is the reason he has also steadfastly withstood calls, including just before the last election in April and over the last month, to launch a widespread military campaign in Gaza.While such a move could actually help him politically in the short term – both with residents of the South tired of living under the threat of rockets, and in being able to fend off charges of weakness that are being hurled in his direction both from his political right and left – in the long-term he is well aware of the cost, both human and political.Netanyahu has now been prime minister for 13-and-a-half years, and during this time Israel has not been involved in a major war. Relative small bore campaigns in Gaza, such as Operation Pillar of Defense in 2012 and Operation Protective Edge in 2014, yes; but not a full-scale war.Contrary to his image in certain quarters abroad, Netanyahu is not at all a military adventurist or trigger-happy. On the contrary: he has cultivated a doctrine over the years of projecting a willingness to use preponderant force but actually using it only as a last resort and when absolutely necessary.On Sunday, after a week of Nasrallah’s bravado and threats, he did not feel compelled to use preponderant force against a Kornet rocket attack that did indeed violate Israeli sovereignty, but did not cause any deaths.With alleged IDF actions over the last few weeks in Iraq, Lebanon and Syria, Netanyahu is enforcing the redlines he established against allowing Iran to entrench itself militarily in Lebanon or transfer game-changing weapons to Hezbollah. That is something he did feel compelled to do. But to launch a major military campaign because Hezbollah was trying to save face? That is not – and has never been – in his repertoire.Nasrallah, too, does not want an escalation. He tested Israel in 2006 with the kidnappings and killings of Ehud Goldwasser and Eldad Regev, triggering the Second Lebanon War, and did not anticipate the wrath of Israel’s response. He admitted after the war that if had known Israel would respond the way it did, he would not have triggered that war.At a time when Nasrallah is trying to build a precision-missile capability in Lebanon, facing a financial crunch because Iran is unable to fund Hezbollah as in the past, and with his organization now part of the Lebanese government, Nasrallah does not want to provoke a large-scale Israeli retaliation at this time.He knows that in the fury of the response, Lebanon will take a crushing beating, costing Hezbollah public support; his organization will face Israel’s devastating firepower and give it an excuse to target his massive missile arsenal; and he himself may well not survive.Both men, Nasrallah and Netanyahu, have great survival instincts, and both – for their own domestic and personal reasons – have no interest in ratcheting up the conflict to a point where it could spiral out of control and topple them both.