Palestinian Authority President Abbas says "we are against all bloodshed." 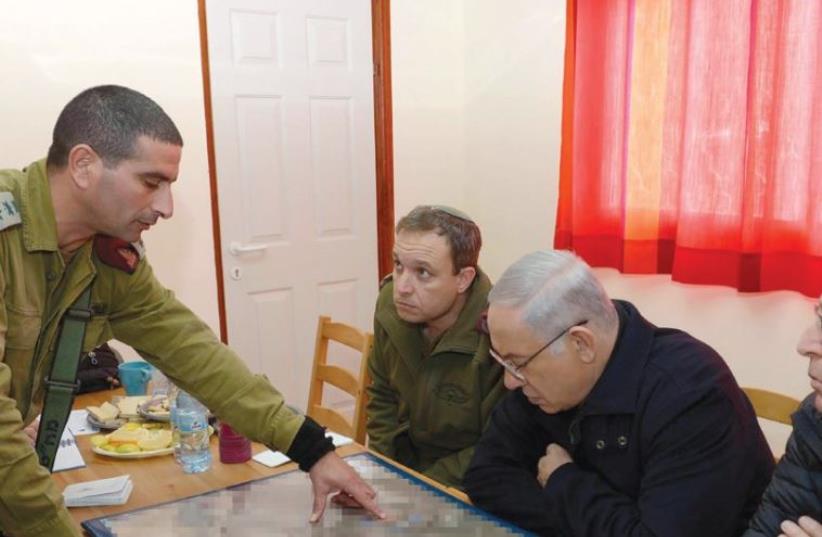 PRIME MINISTER Benjamin Netanyahu and Defense Minister Moshe Ya’alon get a security briefing during their visit to Otniel yesterday.
(photo credit: AMOS BEN GERSHOM, GPO)
Advertisement
Prime Minister Benjamin Netanyahu visited the town of Otniel, south of Hebron, on Tuesday morning and slammed the Palestinian Authority for the incitement that propelled a 15-year-old boy to murder a 38-year-old mother of six there.“Whoever wants to see the truth about the roots of the conflict between us and the Palestinians should come to Otniel and see here a wonderful family that only wants coexistence and peace,” he said, after paying a shiva (mourning period) call to the family of Dafna Meir, murdered on Sunday by the 15-year-old terrorist arrested earlier in the day.“They should see the young people, inflamed by incitement, who come to murder women here, a mother of six, and in Tekoa, a pregnant woman; they come to murder them and say, ‘We will destroy you all, in Tel Aviv and Jaffa as well,’” the prime minister continued.On one side there is “humanity and a desire for coexistence, and on the other side boundless hatred,” he added. “That hatred has an address: it is the incitement of the Palestinian Authority and other actors, such as the Islamic Movement and Hamas. The time has come for the international community to stop its hypocrisy and to call the child by its name.”Netanyahu, accompanied on his visit by Defense Minister Moshe Ya’alon, said the root of the conflict is the Palestinian refusal to “recognize the right to the Jews to have a state in any borders – here, in Tel Aviv, anywhere,” he said. He said this “truth” must be told to the world, and that in the end “the truth will win out.”Meanwhile, Palestinian Authority President Mahmoud Abbas said on Monday night: “We are against killings and bloodshed of any person regardless of his or her religion, ethnicity or race.”Abbas told a group of Christians in Bethlehem that he was “keen to prevent the spilling of one drop of blood from any human being.”He added that the Palestinians were “suffering from daily killings and slaughter.”Referring to the current wave of terrorism, Abbas said that the Palestinian “resistance would remain peaceful and we will remain steadfast and patient on our land.”