Jerusalem maintains that Iran is not only interested in sending military advisers to Syria, but also is keen on establishing ground and air bases there. 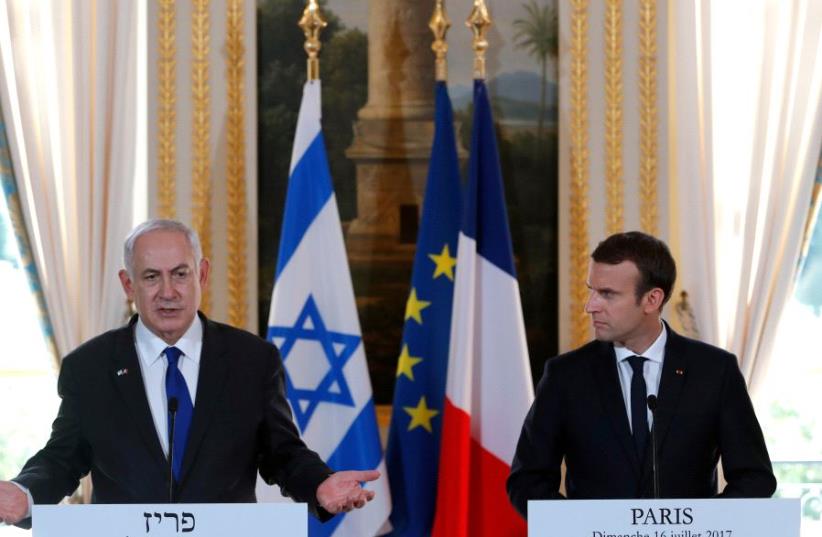 French President Emmanuel Macron and Israeli Prime Minister Benjamin Netanyahu attend a news conference to make a joint declaration at the Elysee Palace in Paris, France, July 16, 2017.
(photo credit: REUTERS/STEPHANE MAHE)
Advertisement
PARIS – Prime Minister Benjamin Netanyahu said on Sunday that Israel opposes the US-Russian-brokered cease-fire in Syria because it perpetuates Iran’s military presence in the country. Diplomatic sources said that Iran wants to establish air, land and sea bases in Lebanon, something Jerusalem cannot tolerate.Netanyahu's objection came during a two-hour meeting the two leaders held in the Élysée Palace, after a ceremony earlier in the day marking 75 years since the roundup and deportation of more than 13,000 French Jews during the Holocaust.Netanyahu told Israeli journalists that in addition to Hezbollah’s presence in Lebanon, Hamas is also attempting to gain a foothold there. The premier said he asked France – which has a distinct, historic relationship with Lebanon as its colonizer – to use its influence in Lebanon to work against efforts to turn the country into a base for more terrorist organizations, something that would have grave consequences.With Jerusalem worried over Iran’s efforts to establish a permanent presence in Syria, Netanyahu said he was opposed to the agreement reached earlier this month between Russia and the US regarding a cease-fire in Syria because, while it removes Iranian forces 20 kilometers from Israel’s border, it perpetuates Iran's military presence in the country.Jerusalem maintains that Iran is not only interested in sending military advisers to Syria, but also is keen on establishing ground and air bases there, something that could radically change the situation in the region. He said that Israel would oppose any agreement in Syria that enables Iranian backed Hezbollah presence there.In his briefing with journalists, Netanyahu also related to the situation on the Temple Mount following Friday’s attack and reiterated that Israel has no intention of altering the status quo there. He pointed out that he spoke both with Jordan’s King Abdullah and Palestinian Authority President Mahmoud Abbas after the attack, and they both condemned it.“It is essential that we won’t let this volatile place explode,” he said. “We must be smart about that, to avoid any other such attack. So the [security] measures that we are installing there are important.’’ 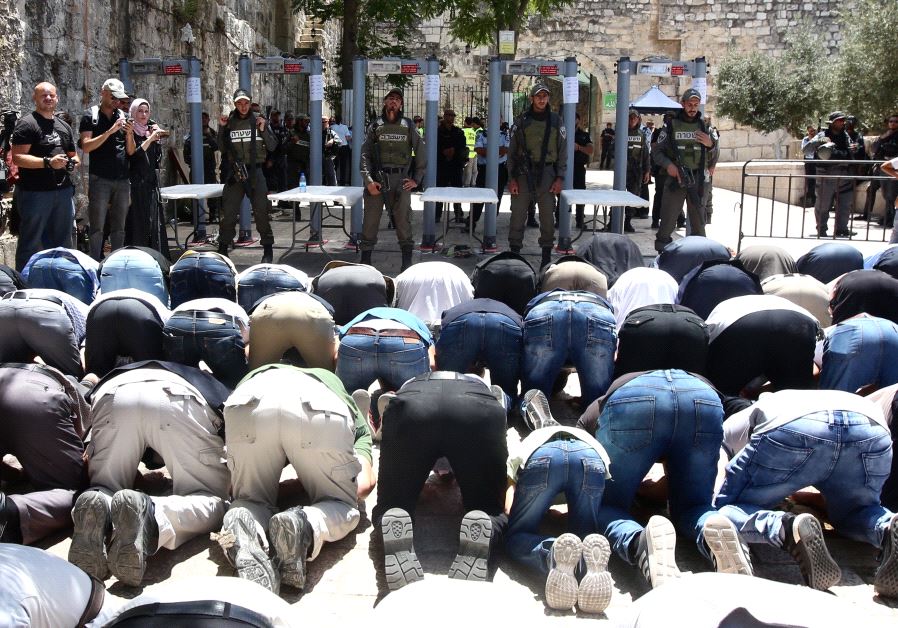 Muslims pray outside the Temple Mount as Israel tightens security (MARC ISRAEL SELLEM)At a press conference without questions after their meeting, Macron said he shared Netanyahu’s concerns about Hezbollah’s arms build-up in southern Lebanon, and that there was a great deal of “convergence” between the positions of Israel and France on regional issues.Regarding the Palestinian issue, Macron said France wanted to see a resumption of negotiations between Israel and the Palestinians in the context of a two-state solution, with Israel and Palestine living side-by-side, having Jerusalem as capital.This is the consistent stance of French diplomacy, he said, without mentioning the Mideast peace conference held in the city six months ago, attended by representatives of some 70 countries and 30 foreign ministers, including then US secretary of state John Kerry.Macron said that France was willing to support all diplomatic efforts, and that – in a reference to settlement construction – he told Netanyahu that it is “important that the conditions for negotiations” exist and that “international law” is respected by all.Netanyahu, in his comments, said that Israel and France share a desire to see a stable and peaceful Middle East, but that he made it clear, “Our view of is that the root of the conflict – the reason it goes on – is the persistent Palestinian refusal to accept a nation-state of the Jewish people in any boundaries.”He said this, alongside the question of enduring security, are the two pillars of peace that could begin to be handled “by seizing also on the opportunities, not exclusively, but also the opportunities opened up by the new approach of many of the leading Arab countries toward Israel.”Netanyahu arrived early Sunday morning in Paris and took part in a ceremony that commemorated the 75th anniversary of the Vel’ d’Hiv roundup of 13,152 French Jews during World War II. The Jews arrested were confined for four days at the Vel’ d’Hiv velodrome, and from there deported to Auschwitz. Less than 100 of them came back. 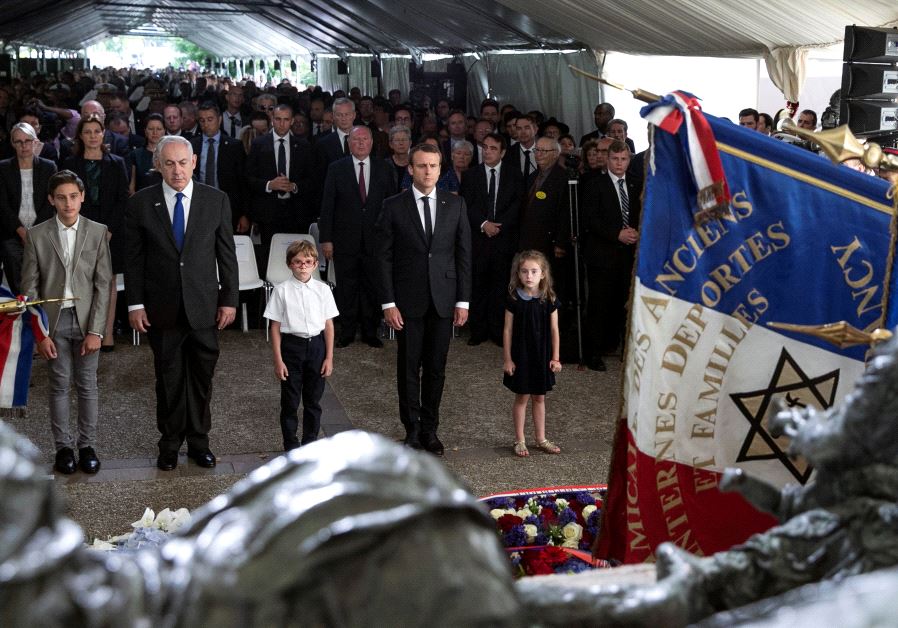 Israeli Prime Minister Benjamin Netanyahu and French President Emmanuel Macron, pay their respects after laying a wreath at the Vel d'Hiv memorial, during a ceremony commemorating the 75th anniversary of the Vel d'Hiv roundup, in Paris, France, July 16, 2017. (Reuters)Macron said that it was France that organized the roundup of the Jews. He added, “Not a single German lent his hand.”“It was indeed France. And thus 13,152 people of the Jewish faith were dragged from their homes between the 16th and 17th of July 1942 to their death. Among them, 4,115 children between ages of two and six, whom we are especially honoring today.”“Time does its work,” the president said. “Archives open [and] the truth comes out. It’s stark, irrevocable. It imposes itself on us all.”Macron’s words were seen as a clear refutation of remarks that far-right leader Marine Le Pen, his rival in the recent elections, said during the campaign, that France could not be held responsible for Vichy France’s actions.At that ceremony, Macron also strongly denounced anti-Zionism, saying, “We will never surrender to the messages of hate; we will not surrender to anti-Zionism because it is a reinvention of antisemitism.”Netanyahu, who first addressed the crowd in French and saluted “my friend President Macron,” noted that “the Nazis and their collaborators... shattered the lives of thousands of Jews at Vel’ d’Hiv. It seems that the values of the French Revolution – liberty, equality, fraternity – these values were crushed brutally under the boots of antisemitism.”Addressing Macron specifically, Netanyahu referred to fighting Islamic extremism, stating, “Your struggle is our struggle. The zealots of militant Islam who seek to destroy you seek to destroy us as well.”One of those who attended the ceremony was Felix Jastreb, who was 12 at the time of the roundup. His parents were taken by the French police. Jastreb himself was sent to a village called Drouais, in the Eure-et-Loir region, to hide.He told The Jerusalem Post that many residents in the village knew he was Jewish, but no one spoke about it. No one denounced him. His parents, on the other hand, were sent to Drancy and from there to Auschwitz. They did not come back.
When the war ended, he received a certificate that described his parents as “disappeared.”It was only some 10 years later that they were declared dead. Jastreb said, “Macron’s participation today at the ceremony is important. But what was most significant to me over the years was the 1995 speech by then-president Jacques Chirac publicly recognizing France’s responsibility of what happened to French Jews during WWII.”Salah Bellouti, president of the Association des Anciens Combattant – the association of resistance members and other French veterans who fought against the Nazis – stated, “I am very moved being here today, 75 years after the Vel’ d’Hiv roundup, a terrible act committed by the French police which we tried to prevent. I am here today to tell all French Jews and Jews around the world ‘Never Again.’ We fought against the Vichy government and its terrible actions. The Jewish community must know that we, the veterans, did not abandon them. And what happened there at Vel’ d’Hiv should serve as a lesson to our young generation in France.”Netanyahu will travel Monday from Paris to Budapest, for meetings with the leaders of Hungary, Poland, the Czech Republic and Slovakia. He is scheduled to return to Israel on Thursday.