Netanyahu: Mourners' tents for terrorists must be removed

Netanyahu also issued directives to significantly strengthen the security arrangements at the access point to the Temple Mount. 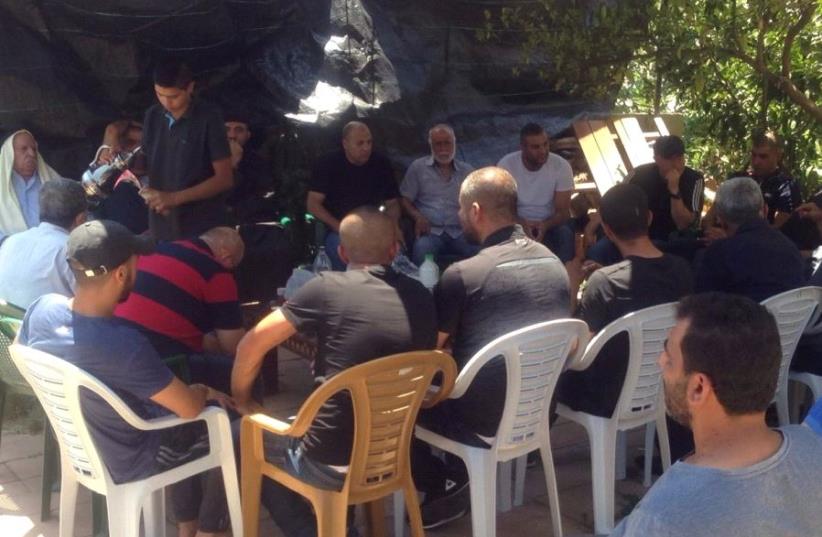 Tent of mourning for Terrorists pf July 14 attack on Temple Mount
(photo credit: ARAB MEDIA)
Advertisement
Prime Minister Benjamin Netanyahu directed the police on Friday afternoon to take down the mourners' tents set up in Umm al-Fahm for the three terrorists killed in the attack that killed two policeman near the Temple Mount earlier in the day.The directives came following consultations Netanyahu had with the country's top security echelon, including Defense Minister Avigdor Liberman, Chief of General Staff Lt.-Gen. Gadi Eizenkot, Police Commissioner Roni Alsheich, General Security Service head Nadav Argaman, and Coordinator of Government Activity in the Territories Maj.-Gen. Yoav Mordechai.
Temple Mount terror attack, 14 July 2017
Netanyahu also issued directives to significantly strengthen the security arrangements at the access point to the Temple Mount.It was further decided during the consultations that the investigation into the attack would continue over the weekend, and that, depending on the situation on the ground, the site would be gradually re-opened to worshipers and visitors on Sunday.In a related development, US Mideast envoy Jason Greenblatt characterized Palestinian Authority President Mahmoud Abbas’s condemnation of Friday's terror attack as “important.”While Greenblatt wrote that Abbas called Netanyahu, in actuality, it was Netanyahu who initiated the call. During the call, Netanyahu called on Abbas to stop Fatah from calling on worshipers to go to the al-Aksa Mosque. Abbas issued a rare condemnation of the attack during the phone call. Even though the terrorists were Israeli Arabs from Umm el-Fahm, Greenblatt wrote in his tweet that he hopes “Abbas helps PM bring those responsible to justice.”Greenblatt, who tweeted that his thoughts and prayers were with the families of the victims, said, “We must defeat all forms of terror!”He also posted a tweet calling Hamas and Islamic Jihad's celebration of the attacks as “Intolerable.”


“Terrorism must be renounced & unconditionally condemned by all,” he wrote.