Silvan Shalom to be in charge of peace process with Palestinians. 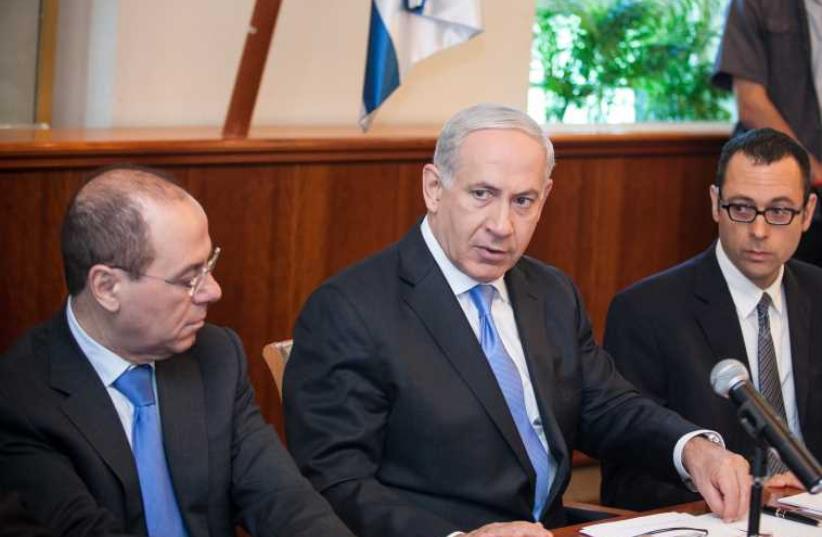 Prime Minister Benjamin Netanyahu (center) and Likud's Silvan Shalom [File]
(photo credit: MARC ISRAEL SELLEM/THE JERUSALEM POST)
Advertisement
Prime Minister Benjamin Netanyahu would like the peace process with the Palestinians to resume soon, he said in closed conversations with Likud officials last week.To that end, he appointed Vice Premier Silvan Shalom, a former foreign minister, to take over for ex-justice minister Tzipi Livni as the government’s representatives for those talks.Shalom will meet with Livni in the coming days to learn what happened behind the scenes in the previous negotiations, which were mediated by US Secretary of State John Kerry. He expressed confidence that he could bring about renewed talks despite a Palestinian decision to focus on persuading the international community to impose a solution on Israel.Netanyahu criticized the Palestinian strategy at Monday’s Likud faction meeting.“There are attempts to challenge our borders all the time,” the prime minister said. “We will maintain our red lines.”In a speech to the Knesset Monday in honor of Jerusalem Day, Netanyahu said he would continue to build in the city despite international opposition, saying it was the right of a state to build in its capital.He challenged opposition leader Isaac Herzog to say whether he would divide the city or keep it united. Herzog replied that it was Netanyahu who was dividing Jerusalem with policies that upset the international community.“As the man who heads the party that united Jerusalem, we believe in a united Jerusalem,” Herzog said. “There is a wide consensus in Israel that Jerusalem will not be divided or torn apart again. There are red lines, and it bothers me that you purposely keep putting this subject on the table.”Regarding Vice Premier Shalom’s new assignment, Meretz leader Zehava Gal-On mocked Netanyahu for appointing a minister to oversee negotiations that she did not believe the prime minister would seek to restart. Speaking to her faction in the Knesset, she warned that if Israel did not seek an accord with the Palestinians, the international community would force a Palestinian state on Israel within two years.The Prime Minister’s Office said that attorney Yitzhak Molcho, who had accompanied Livni to talks with the Palestinian Authority, would remain Netanyahu’s personal envoy to the PA.Besides talking to the Palestinians, Shalom will also be in charge of a strategic dialogue with the US on Iranian matters, and would alternate with Transportation and Intelligence Minister Israel Katz as acting prime minister when Netanyahu is abroad.The prime minister is not expected to be able to take too many trips out of the country due to his narrow 61-59 majority in the Knesset.Zionist Union faction chairman Eitan Cabel reiterated on Monday that pairing off between absent coalition and opposition MKs would no longer be permitted.“If we open the floodgates to trips abroad, we won’t have an opposition,” Cabel told his faction’s weekly meeting. “There are many important reasons to go abroad, but I don’t intend to open a humanitarian committee for their trips.”