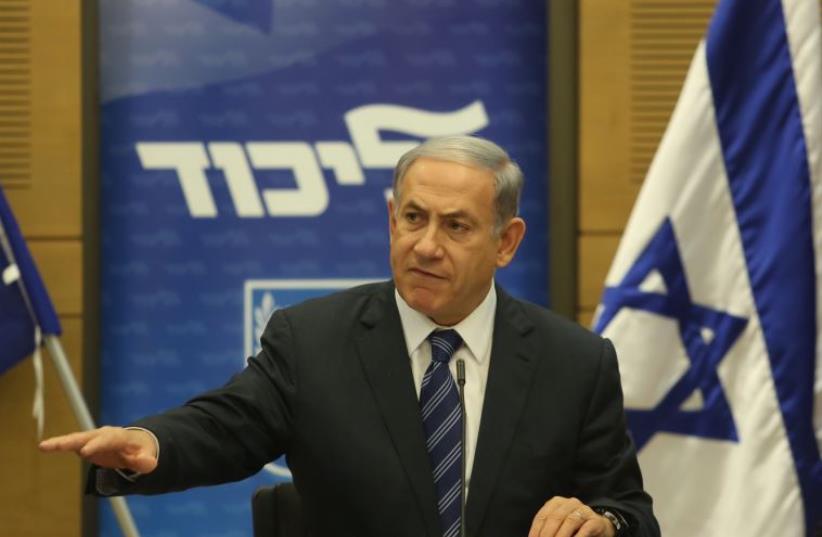 Prime Minister Benjamin Netanyahu gestures during an appearance at a Likud faction meeting
(photo credit: MARC ISRAEL SELLEM)
Advertisement
Israel is doing everything in its power to return Avraham Mengistu and an unnamed Israeli-Beduin man to Israel from Gaza, Prime Minister Benjamin Netanyahu said Friday.Netanyahu made the comments as he emerged from an hour-long meeting at the Mengistu family’s Ashkelon home. Avraham, 28, is believed to be held by Hamas in Gaza since he crossed over the border in September.This was the first meeting Netanyahu held with the family, although they spoke on the phone earlier this week after a contentious meeting that the prime minister’s envoy who deals with missing Israelis, Lior Lotan, had with the family.That meeting was taped and part of the tape aired on Channel 10 on Thursday evening.Lotan is heard intimidatingly telling the family that “whoever turns this into a story involving the Ethiopian community versus the State of Israel will keep Avera [Avraham] in Gaza for another year.”“We will not relent and will do what must be done in order to bring back the two citizens held in Gaza,” Netanyahu said after Friday’s meeting, calling Hamas “a cynical, brutal enemy which denies the basic humanitarian obligation to return innocent civilians back to their home countries.”Netanyahu’s meeting came after both he and Lotan came under fire for the way they have dealt with the Mengistu case.Lotan apologized late Thursday to the Mengistu family for the “content and style” of some of the things he said to them when they met Wednesday, a day before the gag order was lifted that had prevented reporting on the case.He was also heard on the tape telling the family, “You have two options: You can point the finger at Hamas and say, ‘You are holding Avera, you are responsible for his fate, give him back to us and we want to know he is alive.’ Or you can point the finger at Jerusalem and say, ‘You’re not okay. You let him cross the border. You never responded to our letters.’” Mengistu’s father, in a phone conversation with Netanyahu on Wednesday, asked why the prime minister had not responded to a letter he sent about his son.Lotan, a veteran of the Sayeret Matkal, the General Staff Reconnaissance Unit, received a Medal of Valor for his participation in the 1994 attempt to rescue Nachshon Wachsman, a soldier kidnapped by Hamas.He was wounded in that mission.He later served as commander of the IDF’s hostage negotiation unit and as head of the Military Intelligence unit responsible for locating missing IDF soldiers.Before meeting with the Mengistu family, Netanyahu issued a statement saying that Lotan’s comments to the family in the taped meeting should not have been said, and that it was “good” that he had apologized for them. The prime minister then backed his envoy, saying he works “night and day” on a volunteer basis to return missing Israelis.Lotan’s wife, Shlomit, took to Facebook to defend her husband, writing in a post on Friday that Channel 10’s release of selected parts of the conversation was tantamount to a “lynching.”Lotan said that the taped conversation was just one of many her husband held with the family, and there was “no racism and no threats. They broadcast one moment of toughness,” for which he later apologized to the family.Yesh Atid MK Ofer Shelah also defended Lotan, whom he called a friend, in an impassioned Facebook post, saying that “rescuing prisoners and hostages is his life’s mission.”