Initiatives to push Israel to abandon Samaria will be met with increased building, Netanyahu said.

Israeli Prime minister Benjamin Netanyahu
(photo credit: REUTERS)
Advertisement
Prime Minister Benjamin Netanyahu promised that Israel would remain in the West Bank forever — including in the Samaria region — and that radical Islam would never create a base on its hilltops.“Samaria is a strategic asset for the State of Israel. It is the cradle of our people and the key to its future,” said Netanyahu on Monday. He spoke at a ceremony celebrating 50 years of Jewish settlement in Judea and Samaria.“This is the land we inherited from our forefathers. This is our land. We have returned here to remain for eternity. There will not be any more uprooting of settlements in the Land of Israel,” Netanyahu said. “It has been proved that uprooting settlements does not foster peace,” he added.Speaking to thousand of participants who sat on plastic chairs in a large open air area in the Barkan Industrial Park, Netanyahu recalled how the demolition of 21 settlements in Gaza and four in northern Samaria in 2005 had only lead to a major increase of violence against Israel from Gaza.“We uprooted settlements and what did we get, we received missiles,” Netanyahu said. “This will not happen anymore,” he added.“We have cultivated and protected this place, because it also protect us. … From its cliffs and hilltops it is possible to see from one end of the land to the other, he said.When speaking with visitors and foreign leaders, Netanyahu said, he asks “imagine that on these peaks that dominate the Dan region there were extremist forces of Islam. It would endanger us - but it would also endanger you, all of our neighbors [and] .. the entire Middle East.”The hilltops of Samaria guard Route 6, one of Israel’s major highways, and Ben-Gurion Airport, Netanyahu said.Therefore initiatives to push Israel to abandon Samaria will be met with increased building, Netanyahu said. Initiatives to push Israel to abandon Samaria will be met with increased building, Netanyahu said.“We have gone through a difficult period. It was not a simple one. [Now] there is a momentum for development and construction in Judea and Samaria,” Netanyahu said. 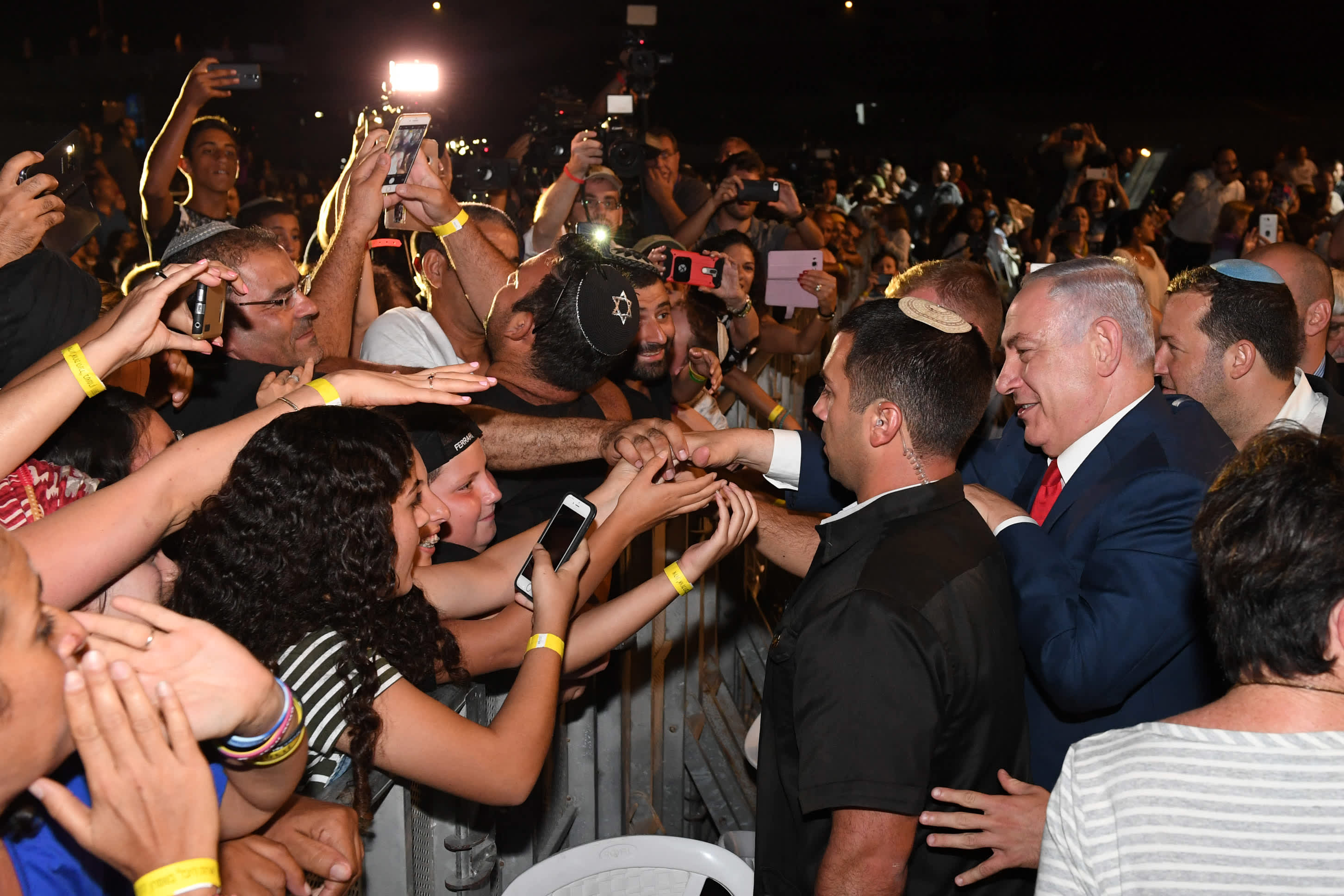 Prime Minister Benjamin Netanyahu greets the crowd at a ceremony celebrating 50 years of Jewish settlement in Judea and Samaria. (Prime Minister's Office)“We are leading this great endeavor together,” Netanyahu said of the partnership between his office, the settler leaders and the residents of Judea and Samaria. There is no government that has done more for the settlements than this government under my leadership,” he added.Separately, Netanyahu promised to return home the bodies of the two soldiers Hadar Goldin and Oron Shaul believed killed in the 2014 Gaza war, as well as the Israeli civilian Avraham Mengistu believed to be missing in Gaza.He noted that Goldin’s parents were in the audience told them, “our hearts are with you. We will not rest until we have brought our sons home.”He added that he had spoken about the matter with visiting UN Secretary General Antonio Guterres in Jerusalem just before arriving at the Samaria ceremony.Settlement construction and Israel’s continued presence in the West Bank is one of the major sticking points between the Jewish state and the international body that views any Israeli activity over the pre-1967 line as illegal.Guterres’ visit did not dissuade Netanyahu from issuing such a strong statement in defense of Israel’s continued hold on settlements in Area C of the West Bank.Netanyahu’s words also come after the visit of high level delegation from the United States led by envoys Jared Kushner and Jason Greenblatt. Palestinian Authority Mahmoud Abbas urged them to pressure Netanyahu to halt settlement construction.Netanyahu’s chief right-wing political rival, Education Minister Naftali Bennett and the head of the Bayit Yehudi party, took the prime minister to task for not doing enough to support Israeli settlements and for not standing strong enough against Hamas in Gaza, when he took the podium at the ceremony.“We need to be working not just to return home our sons but to prevent the next kidnapping,” Bennett said. “We have to stop making concessions to Hamas, but that every day we take steps to ensure that it won’t be worth it for Hamas to hold onto our sons.”“The prime minister said we should not uproot settlements,” Bennett said. “I want to add, don’t uproot them needlessly, but if we do, then we should rebuild anew what we destroyed,” Bennett said.He called on Netanyahu rebuild the four settlements in northern Samaria that were destroyed during the 2005 disengagement: Homesh, Sa-Nur, Ganim and Kadim.More than that, he said, “We want to see new settlements built in Judea and Samaria.” Bennett gave Netanyahu a blessing that his hand should easily sign new building orders for settlements.Samaria Regional Council head Yossi Dagan lauded Netanyahu for his leadership, saying that he was certain the prime minister would continue to lead the country for many years to come.Dagan asked Netanyahu to give residents the power to build and develop the area, but like Bennett he urged him to do more.“The land in Samaria is crying out for new settlements,” he said. In particular, Dagan, as a former resident of Sa-Nur who lost his home in 2005, Dagan asked Netanyahu to allow his council to rebuild those four northern Samaria settlements.“We have returned to the land of the Bible, to the land where Joshua built his alter and to where Joseph is buried,” said Dagan. “We have returned and plan to remain here eternally.”