New Zealand’s Foreign Minister Murray McCully, whose country is serving a two-year term on the Security Council, told a council meeting last week that recent events “cry out for action.” 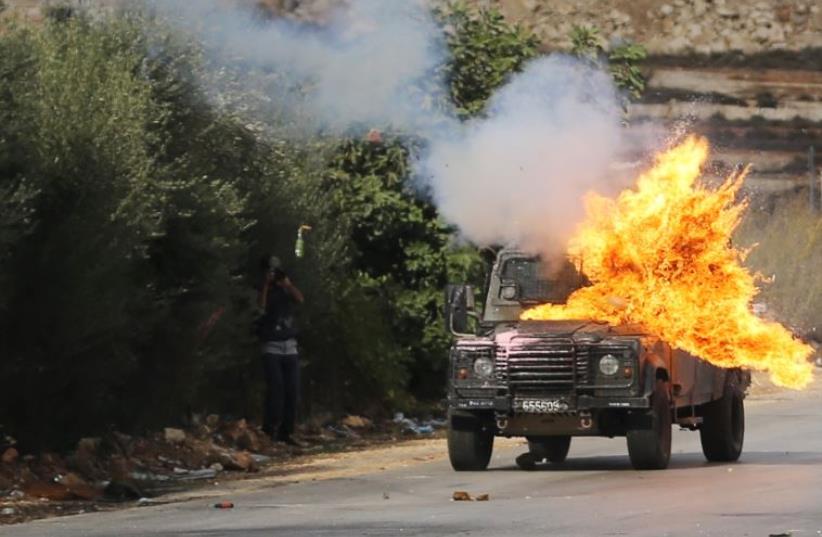 A Border Police jeep is hit by a Molotov cocktail thrown by Palestinian protesters during clashes near the Jewish settlement of Beit El
(photo credit: REUTERS)
Advertisement
New Zealand diplomats at the UN Security Council circulated a draft resolution urging Israel to stop settlement construction and calling on the Palestinians to drop their International Criminal Court bid against Israel.The draft resolution, obtained Thursday by The Associated Press, notes “with alarm the escalating cycle of violence” between Israel and the Palestinians. It declares that a two-state solution, achieved through direct negotiations, is the only path to peace.Israel’s UN Ambassador Danny Danon told AP: “This proposal is destructive instead of being constructive.” Direct talks, not UN resolutions, he said, “are the only way to move forward.”New Zealand’s Foreign Minister Murray McCully, whose country is serving a two-year term on the Security Council, told a council meeting last week that recent events “cry out for action.”Eleven Israelis have been killed by Palestinian terrorists, while 58 Palestinians, many of them attackers, also have been killed.The draft calls on both parties to refrain from actions or statements that might undermine or prejudice negotiations or their outcome, “including continued expansion of settlements and demolition of Palestinian homes in the occupied territories.”The draft also calls on the parties to refrain from “referring a situation concerning Israel or the occupied Palestinian territories to the International Criminal Court.”On Friday, while on a visit to the Netherlands, Palestinian Authority President Mahmoud Abbas said he would negotiate with Israel only if construction in settlements is halted.The draft resolution demands that both Israel and the Palestinians take steps “to end the violence, avoid incitement and protect civilians.” And it calls on both sides to refrain from “provocative acts, including acts which threaten the historic status quo of holy sites in Jerusalem,” an apparent reference to the Temple Mount.The Security Council has not adopted a resolution on the Israeli-Palestinian conflict for six years because of deep divisions among council members and the prospects for this measure are uncertain. The United States, Israel’s closest ally, has blocked several proposed resolutions.