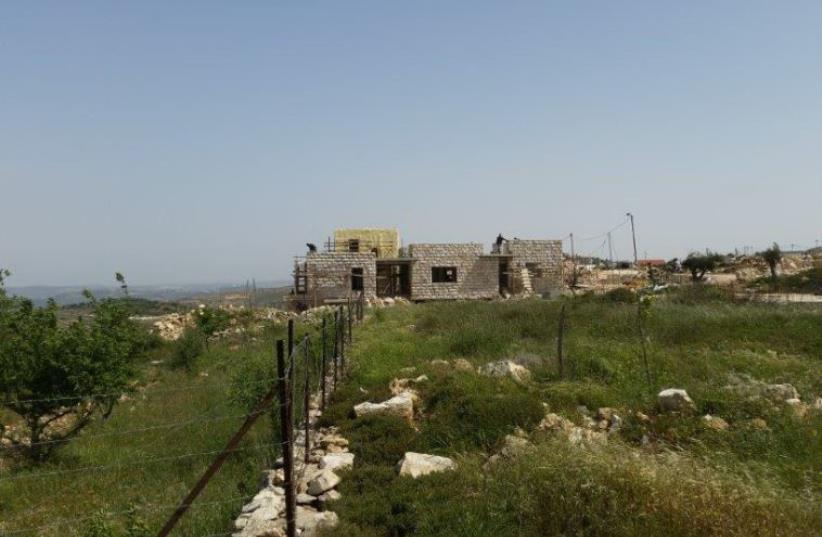 Derech Ha'avot outpost
(photo credit: YESH DIN)
Advertisement
Yesh Din has petitioned the High Court of Justice to order the demolition of nine illegally built homes in the Derech Ha’avot outpost in the Etzion region of the West Bank.The organization focused on these homes in particular because they are under construction and located on land that Yesh Din claims belongs to residents of the nearby Palestinian village of al-Khader.In its petition on behalf of the Palestinian property owners, the non-governmental group also asked the High Court to halt all building in the outpost until the legal status of the small community of 60 Jewish families is deter - mined.Those responsible for the building should be “investigated” and “indicted,” it told the court in the petition filed on Tuesday. Residents of the outpost, it said, have shown flagrant contempt for the law.“It seems that in the entire history of illegal Israeli construction in the West Bank, there has never been a case in which the respondents have demonstrated such consistent and determined reluctance to enforce the law as in the case of this outpost,” Yesh Din told the court.Palestinians from the village of al-Khader have spent the last 13 years unsuccessfully petitioning the court against the outpost, which was first built in February 2001.According to the 2005 Talia Sasson report on West Bank outposts, the Construction Ministry provided NIS 300,000 for the construction of the outpost, even though it was an unauthorized community and no permits were given for its buildings.Some 17 of the already existing structures are on land owned by Palestinians, but the bulk of the outpost is on property whose status was unclear when the community was first created.Four cases were opened and closed against the outpost. A fifth case, jointly filed by the Palestinian land owners and Peace Now in 2008, was shut in 2010 after the state declared its intention to legalize the outpost.In 2014, after completion of a land survey, the civil administration determined that most of the land was on property that did not belong to Palestinians and, therefore, could be declared state land.Yesh Din and others have appealed this ruling and, as a result, the bureaucratic procedures to formalize the declaration of state land have yet to be completed.Until the outpost is legalized, Yesh Din said in its petition, all illegal construction must be halted.“The law enforcement agencies’ complicity is outrageous every time anew: they fail to take action, and explicitly ignore illegal construction undertaken by Israelis, even when it is on land with a controversial status,” said Yesh Din attorney Shlomy Zachary.The Gush Etzion Regional Council said it had not yet seen a copy of the petition, but that the details were not so relevant here.Yesh Din is not interested in construction regulations or rule of law, it said, adding that the organization’s objective is “to ensure that Judea and Samaria is free of Jews, based on its racist and anti-Semitic view of the world.” It wants to make it difficult for any Jew to settle in the land of its forefathers, the council said.On an ironic note, it added, that it wished the organization “a speedy recovery” from such opinions.The civil administration had no comment.Separately, the High Court has ruled on a Peace Now petition and ordered the demolition of the 17 homes built on private Palestinian property in the Derech Ha’avot outpost.It has given the outpost and the Gush Etzion Regional Council until mid-September to appeal the ruling.To save the structures, the regional council has proposed a land swap or re-parceling plan formally known as “unite and divide.”It would offer the Palestinians alternative land in the same area in exchange for the ability to declare as state land the property on which the 17 homes sit.